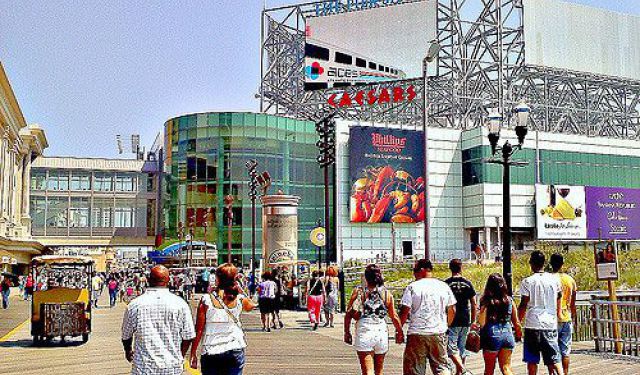 Atlantic City is a popular resort, well known for its iconic Boardwalk, numerous fashionable casinos, sandy beaches and wonderful view of the Atlantic Ocean. Founded in 1854, the city houses a number of historic sites, monuments, memorials, landmarks and attractions, many of which are set along the famous Boardwalk. Follow this orientation walk to explore main attractions of Atlantic City's Boardwalk.
Image Courtesy of Flickr and LancerE.
How it works: Download the app "GPSmyCity: Walks in 1K+ Cities" from iTunes App Store or Google Play to your mobile phone or tablet. The app turns your mobile device into a personal tour guide and its built-in GPS navigation functions guide you from one tour stop to next. The app works offline, so no data plan is needed when traveling abroad.

Atlantic City Boardwalk is one of the most prominent and popular attractions in the city. The first boardwalk was founded here in 1870. Before the 1944 tempest, its length was about 11 km and stretched from Atlantic City to Longport. Although it is now shorter (about 5.75 miles (9.25 km)), it is still considered the world's longest boardwalk. It is home to numerous restaurants, cafés, bars, local specialty shops, souvenir stores, fashionable casinos and chic hotels.
Image Courtesy of Wikimedia and Italo2712.
2

The IMAX Theatre is conveniently situated at the Tropicana Home of the Quarter (Tropicana Casino and Resort). This cultural venue houses Academy Award-winning technology that provides the best quality sounds and crystal clear images. Here you will enjoy the most impressive and immersive movie experience.
Image Courtesy of Flickr and Paul Lowry.
3

Just across the street from the impressive Historic Boardwalk Hall, at Kennedy Plaza, you will see another city’s prominent landmark - Workers Monument - created by sculptor Thomas Jay Warren. The monument was established in 1998 to honor all men and women of organized labor who died during their work on the redevelopment of Atlantic City since 1977. Near the 8-foot bronze statue of a construction employee you will see 25 names of trade workers engraved on the front of the five-foot granite wall.
Image Courtesy of Flickr and Paul Lowry.
4

Boardwalk Hall contains the world's largest musical instrument, a pipe organ of over 33,000 pipes, 8 chambers, its console the world's largest of 7 manuals and over 1000 stop keys, and one of two actual 64'stops. Also included in this organ are pipes which are on 100 inches of pressure, the Grand Ophicleide being the loudest and also most famous.

It was declared a U.S. National Historic Landmark in 1987. The venue seats 10,500 people for ice hockey, and at maximum capacity can accommodate 14,770 for concerts.

Image Courtesy of Flickr and Paul Lowry.
Sight description based on Wikipedia.
5

Caesars Atlantic City is a luxury hotel, casino, and spa resort in Atlantic City, New Jersey. Like Caesars Palace in Las Vegas, it has an ancient Roman theme. Atlantic City's second casino, it opened in 1979 as the Caesars Boardwalk Regency. The 124,720 sq ft (11,587 m2). casino has over 3,400 slot machines, and is one of the largest in Atlantic City. The resort has experienced much expansion and renovation in the past decade, including a new hotel tower, a new parking garage, and a new shopping center, The Pier Shops at Caesars.

Caesars purchased the 11 year old Howard Johnson's Regency Motor Hotel in 1977 and announced that it would renovate the 11-story, 425-room structure and add seven floors to the building, expanding the room count to 548, plus a 52,000 sq.ft. casino. Despite the governor of New Jersey's demands, the Casino Control Commission allowed Caesars to use the Howard Johnson building due to it being relatively new construction. In 1987, the name of the resort was changed to Caesars Atlantic City.

Image Courtesy of Wikimedia and William Warby.
Sight description based on Wikipedia.
6

In front of Brighton Park, at the intersection of Park Place and the famous Boardwalk, is the New Jersey Korean War Veterans Memorial. It was established in 2000 in honor of all victims and veterans of the Korean War in 1950. On the back granite wall, under the eternal flame, you will see the engraved names of 822 soldiers, airmen, sailors and marines from New Jersey, who lost their lives or went missing during that terrible war. The New Jersey Korean War Veterans Memorial was created to commemorate the courage and heroism of the soldiers and to make future generations honor it and remember it.
Image Courtesy of Flickr and Kamoteus (A Better Way).
7

7) Ripley's Believe It Or Not (must see)

Ripley's Believe It Or Not is another cultural venue in Atlantic City. The museum is situated on the famous Boardwalk in a strange building that seems to have been demolished by a wrecking ball. This cultural center is famous for its bizarre exhibits and a lot of interesting memorabilia. Ripley's Believe It Or Not is one of the city’s best attractions and one of the most interesting museums in the world.

The Steel Pier is a 1,000-foot-long (300 m) amusement park built on a pier in Atlantic City, New Jersey. Begun in 1898, it has been one of the most popular entertainment venues in the United States for the first seven decades of the twentieth century, with concerts, exhibits, and an amusement park. It billed itself as the Showplace of the Nation and at its peak measured 2,298 feet (700 m).
Image Courtesy of Flickr and Kevin Jarrett.
Sight description based on Wikipedia.