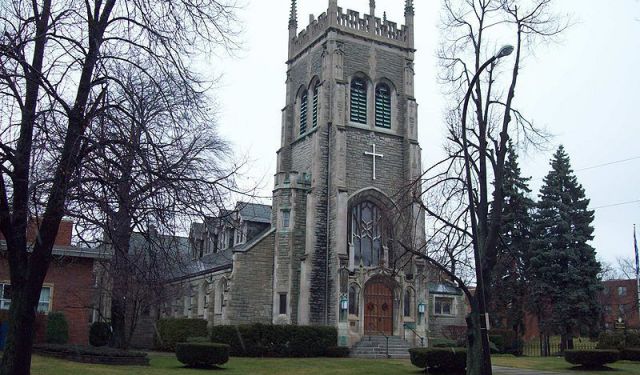 Largely a result of British and French colonialism and missionary work, Christianity is the largest religion in Buffalo. Buffalo is considered a great destination for those who want to admire religious architecture and the magical spiritual beauty it possesses.

The city features some of the most famous Gothic churches in the U.S., including impressive Saint Louis Roman Catholic Church, Methodist Episcopal Church and others. We have compiled this self-guided walking tour to show you the most prominent religious landmarks of Buffalo.
Image Courtesy of Wikimedia and Pubdog.
How it works: Download the app "GPSmyCity: Walks in 1K+ Cities" from iTunes App Store or Google Play to your mobile phone or tablet. The app turns your mobile device into a personal tour guide and its built-in GPS navigation functions guide you from one tour stop to next. The app works offline, so no data plan is needed when traveling abroad.

St. Paul's Episcopal Cathedral in Buffalo is the seat of the Episcopal Diocese of Western New York. This Cathedral has been designated as a National Historic Landmark since 1987. The current building opened in 1890 following reconstruction after a fire gutted the original building constructed in 1838.

This church's exterior features native red sandstone and stands out due to the nave being the largest part of the building. Buttresses supporting the nave walls have been crowned with Gothic-style finials. The Cathedral's main tower reaches an impressive height of 275 feet, featuring a steeple topped with a cross.

There is a smaller tower of 125 feet at the opposite end of the Cathedral. Marble mosaics and slate make up the flooring, with French-made flooring surrounding the altar. All of the chancel furnishings are of oak, featuring Robert Gibson's design, and Mexican onyx has been used in the creation of the altar.

The parish was established January 5, 1829 with land contributed by Louis Stephen LeCouteulx de Caumont, a French nobleman. The first church, constructed of logs, was completed in 1831. The congregation was largely French, German and Irish.

The current church was constructed in 1889. The historic Gothic Revival third church is laid out in a Latin-cross floor plan and features a 245 ft octagonal Medina sandstone steeple with a Seth Thomas clock. Above the steeple rests a 72 ft pierced spire; reputed to be the tallest open-work spire ever built completely of stone (without reinforcement) in the U.S. Inside the church is a 1903 Kimball Organ, which is located in the choir loft.

Image Courtesy of Wikimedia and Fortunate4now.
Sight description based on Wikipedia.
3

Situated on Delaware Avenue, Methodist Episcopal Church is a fine example of Greek revival architectural style built of Medina sandstone by architect John H. Selkirk, who has contributed to the establishment of many Buffalo religious landmarks. The construction of the church lasted 5 years and was completed in 1876.

Today, this church is also known as Asbury-Delaware Methodist Church because of the merging of the two churches in 1916. The combined congregation disbanded in 1969, ending the Methodist presence in the city, which had existed here since the foundation of Buffalo. In 2003, this beautiful church was listed on the National Register of Historic Places.
Image Courtesy of Wikimedia and Pubdog.
4

Trinity Episcopal Church is another old church listed on the National Register of Historic Places. The traditions and theology of Trinity Episcopal Church reflect the denomination of the Anglican Christian Church. This religious complex was built in 1869 in Gothic Revival architectural style. At the beginning of the 20th century, some parts of the complex were remodeled and the complex gained a parish house, as well as new Victorian Gothic features such as stained glass windows designed by American painter John LaFarge.
Image Courtesy of Wikimedia and Pubdog.
5

The First Presbyterian Church was founded in 1812. This church was the first congregation to be organized in Buffalo and is the oldest place of worship in the city. In 1891 the church was officially opened to the public, however, the building was not complete. Being a part of the Allentown Historic District, the 1000-seat First Presbyterian Church attracts visitors with its eye-catching architectural features such as stunning towers and arched windows. The church was designed by well known local architectural firm Green & Wicks. In 1924, intricate ornamentation of the sanctuary was completed by William Carson Francis.
Image Courtesy of Wikimedia and Bruce McCausland.

Create Your Own Walk in Buffalo

Creating your own self-guided walk in Buffalo is easy and fun. Choose the city attractions that you want to see and a walk route map will be created just for you. You can even set your hotel as the start point of the walk.

Buffalo is the largest city in Western New York and the state's second-largest city. Because of its location on the Niagaras River and the western end of Lake Erie, it has been a center of commerce for generations. The earliest settlers were members of the Iroquois nation and French settlers in the 17th and 18th centuries.

In the 19th century, the Erie Canal's construction brought in...  view more

Buffalo, the second largest city in the state of New York, has a rich and colorful history. The War of 1812 was fought in Fort Niagara, just north of it. A growing city with a burgeoning economy in the early 20th century, Buffalo earned a nickname "the City of Light" for its widespread electric lighting. Great American companies, such as American Express, have been founded here.