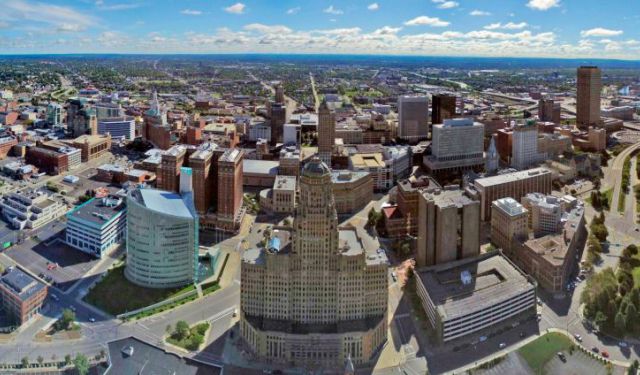 Buffalo is the largest city in Western New York and the state's second-largest city. Because of its location on the Niagaras River and the western end of Lake Erie, it has been a center of commerce for generations. The earliest settlers were members of the Iroquois nation and French settlers in the 17th and 18th centuries.

In the 19th century, the Erie Canal's construction brought in an increased settlement, including immigrants. The automobile, steel, and grain industries accounted for much of the city's economy during the 20th century. When these industries' influence waned in the late 20th century, healthcare, higher education, and research helped fill the void.

For interesting historic sites, you won't want to miss Buffalo City Hall, which is a perfect local example of Art Deco. Old Erie County Hall, dating back to the late 19th century, has fascinating architectural details that are worthy of a look. If you enjoy checking out historic churches, St. Joseph Cathedral is worthy of your time.

History buffs with interest in military history will love Buffalo and Erie County Naval & Military Park for its vessels and exhibits. If vintage cars and the auto industry interest you, The Pierce-Arrow Museum is worthy of your time. Be sure to drop by Central Wharf at Canalside to see what might be going on.

To savor the most enjoyable, exciting sites in Buffalo, take this self-guided walking tour.
How it works: Download the app "GPSmyCity: Walks in 1K+ Cities" from iTunes App Store or Google Play to your mobile phone or tablet. The app turns your mobile device into a personal tour guide and its built-in GPS navigation functions guide you from one tour stop to next. The app works offline, so no data plan is needed when traveling abroad.

Buffalo City Hall is an Art Deco building spanning 32 stories. This building dates back to 1932 and is one of the tallest buildings in western New York and one of the United States' tallest municipal buildings. Dietel, Wade & Jones was responsible for the building's construction.

The City Hall received National Register of Historic Places status in 1999. Some of the highlights include sculpture from Rene Paul Chambellan and friezes by Albert Stewart. The statues feature the likenesses of Grover Cleveland, the former Buffalo mayor and President of the United States, as well as former Congressman and U.S. President Millard Fillmore.

Outside the City Hall, there is a monument to President William McKinley, who was assassinated nearby. The council chambers have an impressive stained glass window in the ceiling. A mural at the east side of the entrance by William de Leftwich Dodge celebrates Buffalo's pioneer history.

Old Erie County Hall was constructed between 1871 and 1875. The building's four floors initially housed the offices for the City of Buffalo. Today, Erie County's court offices and official records are in this building, which received the National Register of Historic Places status in 1976.

The building's construction is of granite, offering a monumental style. A plaza area in front of the building is host to a functional water fountain. One of the building's major highlights is a clock tower measuring 270 feet tall. The granite used in the building's exterior comes from Clark Island in Maine.

This building's main entrance has a Romanesque double arch, and a statue of George Washington stands near the entrance. Rounded windows typical of Romanesque architecture adorn the top stories. The clock tower's steeple, featuring a copper roof, boasts a finial, and there are also statues of goddesses depicting Commerce, Justice, Mechanical Arts, and Architecture.

Image by dIPENdAVE on Wikimedia under Creative Commons License.
3

St Joseph Cathedral is the seat of the Catholic Diocese of Buffalo. Construction began in 1851, with the Gothic Revival building completed in 1863. Although a newer building served as the Cathedral between 1915 and 1977, the Diocese moved the congregation back to the original building after the new building was poorly-suited to Buffalo's weather demands.

One of the Cathedral's highlights is a tower containing two bells that were initially part of a carillon. Three lancet windows over the altar were produced under the direction of King Ludwig II of Bavaria. There is an organ with over 3,000 pipes that underwent a renovation in 2001.

The entrance features a marker commemorating Bishop John Timon, who played the leading role in the construction of this Cathedral. In addition to the three lancet windows, the north transept area closest to the altar features an impressive stained glass rose window. The Cathedral also boasts a Lady Chapel dedicated to the Virgin Mary and an ideal place for quiet reflection.
Image by Fortunate4now on Wikimedia under Creative Commons License.
4

Buffalo and Erie County Naval & Military Park is the United States' largest inland naval park. There are three decommissioned naval vessels that help turn this park into an effective museum that appeals to all ages. One of the ways that the museum broadens the appeal to a larger group of people is a focus on what unites visitors as Americans.

The decommissioned ships available are The Croaker, The Sullivans, and Little Rock. Some of the sights available on the ships are officer and crew quarters. as well as guns and missile houses. These ships feature 46 to 200 stairs required to reach the various deck areas.

The Second Floor Museum building helps introduce visitors to the various sailors from western New York who have served. There is a P39Q Airacobra on display that was built in Buffalo. A Maritime Navigation Simulator lets you imagine the experience of sailing around the world and visiting some of the most popular naval ports.

One of the things that you can do while visiting the museum is to take an audio tour. These tours allow you to have a whole new perspective on the ships' histories. An exciting addition includes the top songs from the ships' decommissioning years.

The Monuments Garden, opened in 1984, is also worth your time when visiting this museum. This area commemorates veterans from all wars and conflicts, including wars in Iraq and Afghanistan. There are also memorials in honor of Purple Heart recipients, veterans affected by PTSD, and Hispanic and Latino veterans.

An excellent way to see some great examples of naval vessels and learn about their history through interactive exhibits.

Stop by the gift store to browse through souvenirs that include apparel, spoons, magnets, posters, and keychains.
Image by Shinerunner on Wikimedia under Creative Commons License.
5

Central Wharf at Canalside is one of Buffalo's top places to be. Some of the attractions that you can easily enjoy include a beach area, a boardwalk, and lawn areas for events. One of the most popular regular events is Canalside Caricatures, where you can take home a custom live drawing.

If you feel like grabbing something to eat, try the casual atmosphere at Clinton's Dish for quick bites or ice cream. You may also want to visit the Outer Harbor Beer Garden for local craft brews. Some of the other exciting options include donuts and other breakfast items, healthy meals, and pizza.

Waterfront concerts are an exciting treat you will want to consider during your visit. These concerts include local acts, as well as more well-known headliners. You may also be able to take advantage of one of the fitness classes that regularly take place at the waterfront.
Image by Invest Buffalo Niagara on Flickr under Creative Commons License.
6

The Pierce-Arrow Museum is dedicated to Buffalo's automotive history, celebrating the cars that were once manufactured in this city. Pierce-Arrow automobiles set the standard for luxury automobiles in the early 20th century and its cars are owned by monarchs, rich and famous people worldwide.

There are vintage vehicles that car and nostalgia enthusiasts will enjoy checking out. You will also be able to enjoy a vast collection of memorabilia.

One of the highlights is an exhibit dedicated to the gas station that Frank Lloyd Wright designed in 1927, featuring a full-size model based on Wright's plans. Some of the highlights of this station design include a second-story observation area and two fireplaces for the waiting areas. There is a copper roof on the station, along with impressive detailing.

Most of the cars in the museum's collection date from the 1940s through the 1960s, including a large selection of classic muscle cars. In addition to the vintage cars, the museum also highlights bicycles, electric vehicles, and motorcycles. The collection of vehicles helps tell the story of Buffalo's transportation history.
Image by Alden Jewell on Flickr under Creative Commons License.
7

The Ellicott Square Building in Buffalo spans 10 stories and boasts an Italian Renaissance style. This building was completed in 1896 and boasts almost 300,000 square feet of office space today. At the time of its completion, it was the world's largest office building.

One of the unique highlights is the assortment of mosaics and rare tiles that grace the entrance and lobby areas. The building's common areas feature marble flooring that is impressive to see. The Central Court area of the building features two grand staircases and a glass roof allowing in a lot of natural light.

A disc in the middle of the floor has the image of a compass's four points, connected by chains, to symbolize the United States' business strength. Ellicott Square Trading Company, on the first floor, is a great place to grab a quick snack. Other businesses you may want to consider include Griddle and Greens and Rosalie the Healthy Chef.
Image by Reading Tom on Flickr under Creative Commons License.
8

St. Paul's Episcopal Cathedral in Buffalo is the seat of the Episcopal Diocese of Western New York. This Cathedral has been designated as a National Historic Landmark since 1987. The current building opened in 1890 following reconstruction after a fire gutted the original building constructed in 1838.

This church's exterior features native red sandstone and stands out due to the nave being the largest part of the building. Buttresses supporting the nave walls have been crowned with Gothic-style finials. The Cathedral's main tower reaches an impressive height of 275 feet, featuring a steeple topped with a cross.

There is a smaller tower of 125 feet at the opposite end of the Cathedral. Marble mosaics and slate make up the flooring, with French-made flooring surrounding the altar. All of the chancel furnishings are of oak, featuring Robert Gibson's design, and Mexican onyx has been used in the creation of the altar.
Image by Reading Tom on Flickr under Creative Commons License.

Create Your Own Walk in Buffalo

Creating your own self-guided walk in Buffalo is easy and fun. Choose the city attractions that you want to see and a walk route map will be created just for you. You can even set your hotel as the start point of the walk.

Buffalo, the second largest city in the state of New York, has a rich and colorful history. The War of 1812 was fought in Fort Niagara, just north of it. A growing city with a burgeoning economy in the early 20th century, Buffalo earned a nickname "the City of Light" for its widespread electric lighting. Great American companies, such as American Express, have been founded here.

Largely a result of British and French colonialism and missionary work, Christianity is the largest religion in Buffalo. Buffalo is considered a great destination for those who want to admire religious architecture and the magical spiritual beauty it possesses.

The city features some of the most famous Gothic churches in the U.S., including impressive Saint Louis Roman Catholic Church,...  view more