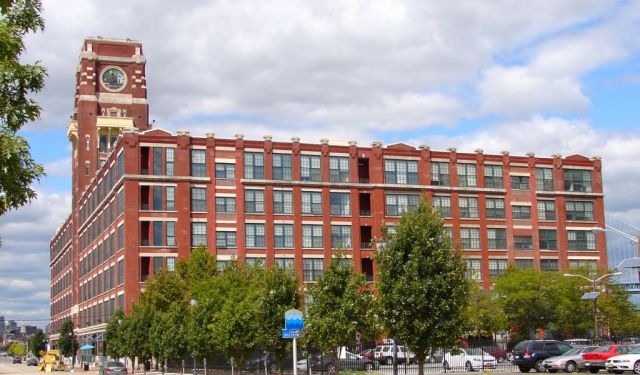 Camden is a small, beautiful city sitting on the banks of the Delaware River in New Jersey. Complete with the river, the city forms a major transportation hub. Nonetheless, it also hosts an abundance of prominent sights, the most notable of which include the Walt Whitman Arts Center, the Nipper Building, the Battleship New Jersey Museum and Memorial and more. When in Camden, make sure to visit these and other key attractions of the city using this orientation walk.
Image Courtesy of Wikimedia and Smallbones.
How it works: Download the app "GPSmyCity: Walks in 1K+ Cities" from iTunes App Store or Google Play to your mobile phone or tablet. The app turns your mobile device into a personal tour guide and its built-in GPS navigation functions guide you from one tour stop to next. The app works offline, so no data plan is needed when traveling abroad.

Francis Barraud, an unknown British artist, saw his dog, Nipper, sitting attentively in front of a talking machine. Barraud was so impressed that he decided to put it on canvas. Nipper, the alert Fox Terrier with an ear cocked to an antique phonograph, became the best known dog in the world. The painting, called His Master's Voice, was sold to the British Gramophone Company Ltd. and became the trademarks of both the Gramophone Company and its new American affiliate, the Victor Talking Machine Company in 1901. RCA purchased the Victor Company in 1929. The purchase included the Camden manufacturing plant and the "His Master's Voice" trademark. After manufacturing ceased in 1992, the building became vacant, vandalized and a general eyesore to the surrounding area. Utilizing the Investment Tax Credit, the structure was converted into a complex featuring a mix of 341 upscale loft apartments with outstanding views of the Philadelphia skyline. The restoration was completed in August 2003 at a cost of $65 million.

Image Courtesy of Flickr and Mulad.
Sight description based on Wikipedia.
2

The Walt Whitman Arts Center is a non-profit organization and an amazing cultural center, which promotes the legacy of local poet and writer Walt Whitman. Throughout the year, the center hosts a number of cultural activities such as readings, dance recitals, concerts, theater performances and other visual art events. The Arts Center is located in a former public library, which was built in 1916 in the Classic Revival style.
Image Courtesy of Wikimedia and Smallbones.
3

3) Rutgers-Camden Center For The Arts (must see)

The Rutgers-Camden Center For The Arts is an important cultural organization in Camden. It was created in 1976 to serve as the "Major Arts Organization of New Jersey", and it is located on the campus of Rutgers–Camden University. The center includes three venues: the Walter K. Gordon Theater, the Stedman Gallery, and the Black Box Studio. It organizes visual and performing arts events throughout the year, in addition to hosting seminars and lectures on topics pertaining to these fields.
Image Courtesy of Flickr and Craig Hatfield.
4

Camden City Hall is located in a magnificent, 113-meter-tall skyscraper, which is the tallest building in the city. The structure was built in 1931 in the Neo-Classical style. The tower rests on a large base and narrows at the top, resembling a bottle. At the top of the building there is an enormous clock tower and gorgeous art on two sides of the building. There are several expansive, engraved quotations decorating the walls.
Image Courtesy of Flickr and Mulad.
5

The Walt Whitman House is a historic house and museum that showcases the life and work of American poet Walt Whitman. This modest, wooden-framed house was built in 1848 in the Greek-revival style and was purchased by Walt Whitman in 1884. It was the first house he owned and the last one he lived in. It was here that he wrote his last works. After Whitman's death, the house was sold to the state of New Jersey, and in 1926 it opened as a museum. Here you can see a collection of rare photographs, antique furnishings, Whitman's original letters, his personal belongings, his death notice and much more.
Image Courtesy of Wikimedia and Midnightdreary.
6

The Battleship New Jersey Museum and Memorial, known as BB62, is a former battleship and educational maritime museum, which opened in 2001. The ship was built and launched at the Philadelphia Naval Shipyard in 1942. It has served in WWII, as well as in Korea, Vietnam and the Middle East. It was decommissioned in 1991, but was officially stricken from the Navy list only in 1995. In 1999, the ship arrived at the Philadelphia Naval Shipyard and was carefully restored. It opened in 2001 as a Maritime Museum, where visitors can view artifacts belonging to the ship and its crew and learn about life on-board.
Image Courtesy of Wikimedia and Vladsinger.
7

7) The Camden Children's Garden (must see)

The Camden Children’s Garden is operated by the Camden City Garden Club, Inc and is located on the Camden Waterfront, across from downtown Philadelphia. This venue was created in 1999 and is designed for children and families.

This 4.5-acre (18,000 m2) garden features a variety of themed educational exhibits for children for creative and imaginative play, such as the Dinosaur Garden, a Giant Picnic Garden, Storybook Gardens, Red Oak Run and Tree House, Cityscapes Garden and more! The facility includes indoor attractions such as the Philadelphia Eagles Four Seasons Butterfly House, Plaza de Aibonito, a Puerto Rican tropical greenhouse exhibit, and Benjamin Franklin’s Secret Garden and Workshop. Many exhibits and gardens were original displays in the Philadelphia Flower Show and come back to the Camden Children’s Garden to find a permanent home. There are three amusement rides: carousel, Arrow River Express Train Ride, and Spring Butterfly Ride. The Garden is closed January and February. Garden Festivals are family-oriented special events held at the Garden on the second and fourth weekends of the month, from April through November. The Garden also hosts the Annual Holiday Festival of Lights through December.

Image Courtesy of Flickr and DeclanTM.
Sight description based on Wikipedia.
8

The Adventure Aquarium, formerly the New Jersey State Aquarium, is a for-profit educational entertainment attraction operated in Camden, New Jersey on the Delaware River waterfront by the Herschend Family Entertainment Corporation. It originally debuted in 1992, and re-opened in its current form on May 25, 2005, featuring approximately eight thousand animals living in varied forms of semi-aquatic, freshwater, and marine habitats. The facility has a total tankage volume of over 2 million US gallons (7,600 m3), and public floor space that covers nearly 200,000 square feet (19,000 m2).
Image Courtesy of Flickr and Jim, the Photographer.
Sight description based on Wikipedia.

Create Your Own Walk in Camden

Creating your own self-guided walk in Camden is easy and fun. Choose the city attractions that you want to see and a walk route map will be created just for you. You can even set your hotel as the start point of the walk.

Camden has some very beautiful and diverse architecture. Since its foundation in 1626, Camden has developed a wonderful “collection” of architectural sights. Take the following tour to visit some of the most fascinating and famous sights along Camden's historic Market and Cooper Streets.