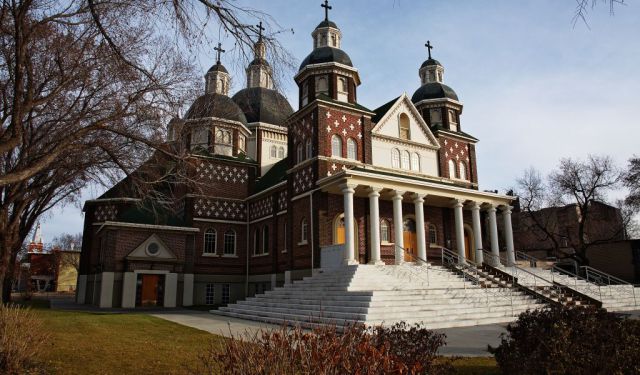 When it comes to cultural or religious attractions, Edmonton will amaze you by its large number of beautiful buildings. Indeed, this city boasts not only the biggest number of churches, cathedrals and temples in all of Alberta, but also the oldest religious buildings. Take this self-guided tour to discover the most beautiful parishes and churches in Edmonton.
Image Courtesy of Wikimedia and Darren Kirby.
How it works: Download the app "GPSmyCity: Walks in 1K+ Cities" from iTunes App Store or Google Play to your mobile phone or tablet. The app turns your mobile device into a personal tour guide and its built-in GPS navigation functions guide you from one tour stop to next. The app works offline, so no data plan is needed when traveling abroad.

St. Joseph's Basilica is a cathedral of the Roman Catholic diocese of Edmonton and it is one of the largest churches in the entire city. This basilica features more than 60 glass windows painted with different Bible scenes. Its construction began in 1913 and it was completely finished in 1963. During the Great War, its construction was stopped until 1924. In 1917 this basilica became a separate parish for English-speaking parishioners because the French speaking people were given their own parish named St. Joachim’s. In the following years, during the Great Depression and the Second World War, construction was once again halted. In 1954, construction began again, and this time the parish acquired a new appearance and a new design.
Image Courtesy of Wikimedia and Croberto68.
2

St. Joachim's Church is another church in Edmonton which distinguishes itself by being the oldest Roman Catholic parish in this city. Its foundation was influenced by bishop Albert Lacombe who converted a small building into a chapel. Later this chapel was renamed by another bishop – Alexander Antoine Tache in St. Joachim. In 1877 this parish changed its location and was rebuilt on Jasper Avenue. In 1886, Hudson's Bay Company finished construction of the 3rd church, named St. Joachim. Much later, in 1978, this parish was designated as a provincial historic landmark.
Image Courtesy of Flickr and Stella Blu.
3

First Presbyterian Church is located in downtown Edmonton. The congregation celebrated its 125th anniversary in November 2006. The Organizational Meeting for this congregation was held on November 3, 1881, and the first building opened at 104 Street and 99 Avenue a year later. The second structure was completed and dedicated in July 1902 at 103 Street and Jasper Avenue. The present building was completed in November 1912.

A notable minister was The Rev. David George McQueen, DD, LLD who served for 43 years, starting in 1887 upon graduation from Knox College, University of Toronto, and guided the formation of numerous congregations in the area. He served as Moderator of the General Assembly in 1912 (hosted by First in the second building) and as "Interim Moderator" in 1925, before Ephraim Scott was elected to resume the "Continuing Presbyterian Church". McQueen's predecessor and FPC's founding Minister was Rev. Andrew Browning Baird, DD, who arrived in Edmonton before the arrival of the railway, but left Edmonton for a professorship at Manitoba College.

Image Courtesy of Flickr and bulliver.
Sight description based on Wikipedia.
4

All Saint's Anglican Cathedral is the cathedral serving the Anglican Diocese of Edmonton, which covers central Alberta. It serves as the episcopal seat of the Bishop of Edmonton, currently the Right Reverend Jane Alexander.

The Parish of All Saints' was founded in 1875 by the Reverend Canon William Newton, the first known Anglican missionary to the Edmonton area. The parish first meet in a log cabin at the corner of what is now Jasper Avenue and 121 Street. The present building was completed in 1956, after tearing down the structure built in 1921, and was finally given the permanent status of cathedral. The parish hall to the north, which predated the current Cathedral, was demolished in 1973 with Cathedral Close, with the senior's complex and synod office building eventually being built in its place.

Image Courtesy of Flickr and Jason Woodhead.
Sight description based on Wikipedia.
5

McDougall United Church is impressive because of its heritage and history. It is one of the oldest Protestant congregations in Edmonton and all of Alberta. Their first church was built in 1873 and the present sanctuary was built in 1910; it can hold approximately 2000 people. They provide institutional religion, worship services began each Sunday at 10.30 am and their Sunday School also begins at 10.30 Am. Inside you will see a wide number of icons and religious statues and figurines. Most of the icons were created by John Magafas.
Image Courtesy of Flickr and bulliver.
6

St. Josaphat Cathedral is a Ukrainian Catholic cathedral in Edmonton, one of the best examples of Byzantine Rite church architecture in Canada. It is the seat of the Ukrainian Catholic Eparchy of Edmonton, and has been a cathedral since 1948. Occupying 18 city lots in the McCauley neighbourhood, the cathedral has been recognized for its heritage significance and "is distinguished by it seven domes, columned entry portico, and red brick veneer embellished with darker brick pilasters and inlaid cream coloured crosses.

The parish was established by the Basilian Fathers in 1902, at first without a permanent home. The current building was designed in 1938 by the Reverend Phillip Ruh, an Oblate missionary from Belgium who intensively studied the Byzantine Rite building designs of Ukraine so that the building would be culturally acceptable to the parishioners. His design mixes elements of Ukrainian Baroque with Western European influences, to produce a unique Canadian style dubbed "Prairie Cathedral". This cathedral is considered to be "the most elaborate Ukrainian Church in Alberta" and "one of the finest examples of Ukrainian-Canadian church architecture". Ruh also designed St. George Cathedral in Saskatoon.

Construction lasted from 1939 to 1947. The building became a cathedral when Edmonton was selected as the seat of a new exarchate headed by a bishop. The first bishop was the Most Reverend Neil N. Savaryn, appointed "Bishop Ordinary for the Apostolic Exarchate of Edmonton serving Alberta and British Columbia".

Image Courtesy of Wikimedia and Darren Kirby.
Sight description based on Wikipedia.
7

Sacred Heart Church was opened in 1913. It was built in the French Gothic style with many large windows that fill the body of this church with light. During its long history, this church became home to many people of different backgrounds, giving them food and shelter. Since 1971, every Christmas they give a dinner in honour of this holiday and a lot of citizens don’t hesitate to contribute. The parish was renamed Sacred Heart only in 1991.Architecturally speaking, this beautiful and large parish is a true example of Medieval art.
Image Courtesy of Wikimedia and WinterE229.
8

Holy Trinity Orthodox Church is located in the north district of Edmonton known as “Church Street”. It is accessible for people from the entire city. Services of worship are usually provided on Sundays from 10 Am. But this church keeps its doors open each day for prayers until 5 Pm. People of all backgrounds are welcome, regardless of religious confession, race and age.
Image Courtesy of Wikimedia and Darren Kirby.

Create Your Own Walk in Edmonton

Creating your own self-guided walk in Edmonton is easy and fun. Choose the city attractions that you want to see and a walk route map will be created just for you. You can even set your hotel as the start point of the walk.

If you want to have a unique experience you should not miss the chance to visit the most interesting museums and galleries located in Edmonton. Whether it’s a museum, an art gallery or a cultural centre, Edmonton offers its visitors different cultural spots every day. These museums aren’t just “typical” attractions, but also beautiful landmarks with deep historical roots. Go ahead and...  view more

The capital city of Alberta province, nicknamed "Canada's Festival City" for its year-round slate of festivals, Edmonton is a cultural, governmental and educational hub. Among its landmarks are the Royal Alberta Museum reflecting the region's aboriginal culture and natural history, the futuristic-looking Art Gallery of Alberta, renowned for its First Nations art, and more. To...  view more