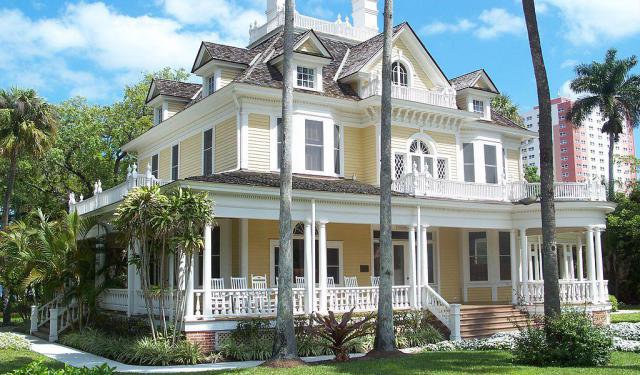 Image by Ebyabe on Wikimedia under Creative Commons License.

The sunny city of Fort Myers has a number of different and interesting attractions to offer. Visitors taking this orientation walking tour will admire and learn about the oldest mansions and the most important federal buildings with architectural importance, as well as enjoy the sight of the splendid Caloosahatchee River with its yachts and grand bridge and take a rest on one of the benches in Centennial Park.
How it works: Download the app "GPSmyCity: Walks in 1K+ Cities" from iTunes App Store or Google Play to your mobile phone or tablet. The app turns your mobile device into a personal tour guide and its built-in GPS navigation functions guide you from one tour stop to next. The app works offline, so no data plan is needed when traveling abroad.

The Edison Bridge is a bridge located in Fort Myers. It is named after inventor Thomas Alva Edison, who was once a local Fort Myers resident, along with Henry Ford, founder of the Ford Motor Company. Both bridges are 55 feet tall.

The Edison Bridge consists of two separate three lane bridges, with one span carrying northbound traffic, and the other carrying southbound traffic. It carries U.S. 41 Business Route (with the hidden designation of State Road 739) over the Caloosahatchee River, connecting downtown Fort Myers (on the southern shore) with North Fort Myers. Despite carrying the same route, the two bridges are not parallel to each other. The two spans land at the same point on the north side of the river, but are separated by a few blocks on the south side. When looking on a map, the two spans and the south bank of the river form a right triangle. This is because Business Route U.S. 41 and S.R. 739 are carried on two separate one way streets in Downtown Fort Myers, with northbound traffic using Park Avenue, and southbound traffic traveling on Fowler Street.

The current northbound and southbound spans opened in 1992 and 1993 respectively. They replaced a small two lane drawbridge which opened on February 11, 1931. Thomas Edison dedicated the bridge, which opened on his 84th birthday. He was also in the first car that drove across the bridge after the ribbon-cutting. The drawbridge was located at the site of the current southbound bridge.

Image by Ebyabe on Wikimedia under Creative Commons License.
Sight description based on wikipedia
2

The Yacht Basin in Fort Myers is one of the city's top attractions: a beautifully designed marina. It is located on the south bank of the Caloosahatchee River and it shelters an incredible number of splendid yachts of all sizes on its shore. The Yacht Basin, which is also known as the city marina, is an unbelievably beautiful spot to admire in Fort Myers.
Image by garynet on Flickr under Creative Commons License.
3

The Murphy-Burroughs House is a historic home in Fort Myers located at 2505 1st Street. On August 1, 1984, it was added to the U.S. National Register of Historic Places. The Burroughs House provides living history tours once a week. It was Ft. Myers' first year-round luxury home. It is in the Georgian Revival style and was built in 1901 for George Murphy, a cattle rancher. The beautiful veranda wraps around 3 sides of the house. Nelson Burroughs bought the house in 1918.

The Gilmer Heitman House is a mansion built in 1908 for Gilmer Heitman, a famous and successful businessman and one of the closest friends of Thomas Edison and Henry Ford. The residence was designed in a combination of Victorian and Queen Anne architectural styles. The former house of Heitman is listed as a historic treasure of the Fort Myers city. Currently it is used as a site for weddings and other celebrations . The mansion is surrounded by a splendid garden filled with superb plants and flowers.
Image by Ebyabe on Wikimedia under Creative Commons License.
5

The Edison Theatre in Fort Myers was constructed in 1920 year and, like other attractions in the city, was named in honor of the famous inventor and scientist Thomas Alva Edison. The initiative to open the present theater belonged to John Hendry. It used to be a very popular attraction among the locals until 1980, when it was renovated and transformed into an office building. Even though visitors are not able to enjoy performances here any more, the Edison Theatre building is still an attractive landmark in Fort Myers.
Image by Ebyabe on Wikimedia under Creative Commons License.
7

The Old Lee County Courthouse, which is one of Fort Myers' main landmarks and an architectural treasure, was constructed in 1915. In 1989 it was declared part of the U.S. National Register of Historic Places and underwent an important reconstruction process. The two story construction was designed by the famous architect Francis J. Kennard. He chose the Classical Revival style. The facade of the structure is supported by two grand Doric columns. In 1995, the Old Lee County Courthouse was the place of a scene from the famous "Just Cause" film, featuring Sean Connery and Laurence Fishburne.
Image by Wknight94 on Wikimedia under Creative Commons License.
8

The City Tavern is one of the most popular spots in Fort Myers. At the tavern, clients are able to choose from an incredible selection of drinks. They'll be served by a quick and polite bartender while listening to live performances by the best bands from the region and enjoying all these things in a nice and cozy interior. The City Tavern is also famous for its happy hours and other pleasant surprises provided by the bar. The tavern has a big television screen and several smaller TV sets available for fans to watch important sporting events. Concerts are held on Thursday, Friday and Saturday evenings. Patrons are welcome every day from 11 a.m. to 2 a.m.
Image by Ebyabe on Wikimedia under Creative Commons License.
9

The Centennial Park in Fort Myers is one of the most centrally located parks in the city and its simplicity is appreciated both by the locals and tourists. The park is located near the waterfront which allows visitors to admire the fauna and monuments within the recreational area as well as the Caloosahatchee River. Other attractions in Centennial Park are a big playground, a number of comfortable benches, several Civil War memorials and a very popular monument named "Uncommon Friends" representing three famous men: Thomas Alva Edison, Henry Ford and Harvey Firestone.
Image by Elle Weems on Flickr under Creative Commons License.
10

The Edison and Ford Winter Estates contain a historical museum and 17 acre botanical garden on the adjacent sites of the winter homes of Thomas Alva Edison and Henry Ford beside the Caloosahatchee River in southwestern Florida. Located at 2350 McGregor Boulevard, it is open daily from 9:00 am to 5:30 pm, including Sundays. On April 18, 2012, the AIA's Florida Chapter placed the Edison and Ford Winter Estates on its list of Florida Architecture: 100 Years. 100 Places.

Edison's botanical garden contains more than a thousand varieties of plants from around the world, including African Sausage Trees and a 400-foot (120 m) banyan tree given by Harvey Firestone in 1925. It was originally an experimental garden for industrial products. Later Mrs. Edison gave the garden an aesthetic turn with plantings of roses, orchids and bromeliads.

Create Your Own Walk in Fort Myers

Creating your own self-guided walk in Fort Myers is easy and fun. Choose the city attractions that you want to see and a walk route map will be created just for you. You can even set your hotel as the start point of the walk.

Fort Myers is a very rich city in art venues like museums and galleries. Most of the galleries reflect the talents of artists from the city and its surroundings. The museums are true treasures for people who want to find out more about the traditions, culture and history of the region, as well as interesting facts about science and nature in general. By following this guided tour, you will have an...  view more