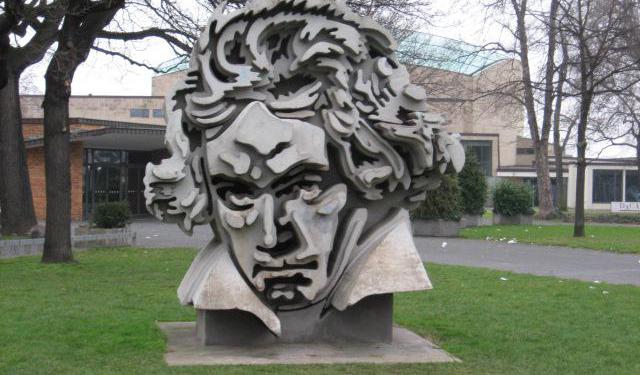 Image by Thomas Wolf on Wikimedia under Creative Commons License.

The city of Bonn is home to numerous religious confessions which co-exist in the spirit of tolerance and peace. It is also the home of various places of worship such as ancient churches, cathedrals, chapels and basilicas. Take this tour to discover the exceptional architectural design and style of the finest churches that Bonn has to offer.
How it works: Download the app "GPSmyCity: Walks in 1K+ Cities" from iTunes App Store or Google Play to your mobile phone or tablet. The app turns your mobile device into a personal tour guide and its built-in GPS navigation functions guide you from one tour stop to next. The app works offline, so no data plan is needed when traveling abroad.

1) The Church of St. Peter and St. John the Baptist

2) Church in the Name of Jesus

The Church is one of the most interesting north German Jesuit churches, built in Romanesque style featuring Gothic elements juxtaposed with almost Baroque forms. Designed by Jakob de Candrea, the church was built using the so-called "Jesuit Gothic" style, combining Baroque elements with other styles. The two towers surrounding the building have double recessed Romanesque windows with Gothic windows on the central arch. However, the columns are ornamented with Baroque decorations. Each tower is crowned with a bulbous dome. The interior of the church features a huge, impressive hall. The crypts below the church serve as the resting place of 65 Jesuit Fathers.
Image by Schmitzikowski on Wikimedia under Creative Commons License.
3

3) The Church of St. Remigius

The church of St. Remigius in the city of Bonn is a Gothic, three-nave basilica with an underground vault; it was originally known as the Minoritenkirche or Brethren Church back in 1317. The construction of the church began in 1272 by the mendicant order of the Franciscans and was initially intended as a monastery church. Since 1957 and until 2007, the church was under the care of the Franciscans once again. In 2006, the separate parish of St. Remigius merged with the parish of St. Martin. Nowadays, The Catholic Community Church also uses the church as a university.
Image by Andreasdziewior on Wikimedia under Creative Commons License.
4

4) The Church of the Cross

The Church of the Cross is the largest Protestant Church in Bonn. It has plenty of room, enough to accommodate 1,200 people and serves double functions. On one hand, it serves as a gathering place for church services since 1871, on the other hand, people are attracted by the large size and central location of the Evangelical church, as well as the cultural events being held here. In both respects, the Church of the Cross is open, inviting and attractive - according to the word of Christ from the Gospel of John (chapter 12 verse 32), which stands as a motto over the entrance: "When I am lifted up from the earth, I will draw all men unto me."
Image by Hans Weingartz on Wikimedia under Creative Commons License.
5

The Bonn Minster (German: Das Bonner Münster) is one of Germany's oldest churches, having been built between the 11th and 13th centuries. At one point the church served as the cathedral for the Archbishopric of Cologne. However, the Minster is now a Papal basilica.

Originally the Minster was the collegiate church of Saints Cassius and Florentius, who were Roman legionaries of the legendary all-Christian Theban Legion. The legion's garrison, according to legend, was in the Egyptian town of Thebes. Roman Emperor Maximianus Herculius ordered the legion to march to Gaul and assist in subduing rebels from Burgundy. At some point during their march, the legion refused to follow the emperor's orders either to kill fellow Christians or to worship Maximianus Herculius as a god. As a result, a large number of legionaries were martyred in Agaunum, now named Saint Maurice-en-Valais after Saint Maurice. According to legend, Saints Cassius and Florentius, who were under the command of Saint Gereon, were beheaded for their religious beliefs at the present location of the Bonn Minster.

Image by Qualle on Wikimedia under Creative Commons License.
Sight description based on wikipedia
6

6) The Chapel of St. George

The Chapel of St. George, located in the Old Cemetery in Bonn, was built in the 13th century. The Romanesque building served the members of the Convention as a place of prayer and religious services. The chapel was furnished with monumental Medieval vaults and wall paintings. In the 19th century, the chapel was affected by a fire outbreak that destroyed most of the paintings inside. Fortunately, some of them have been preserved; the rest are exact reproductions of the old ones. The renovation of the chapel was considered a spectacular conservation event in the Rhineland in the mid-19th century.
Image by Hans Weingartz on Wikimedia under Creative Commons License.
7

The Church of St. Mary is located in the northern part of Bonn, near the city center. The plans for the construction of the church belong to Joseph Prill, a high school religion teacher in Bonn. The plans provided for a large Neo-Gothic style basilica with five-sided final chorus, two aisles and a high steeple. The foundation stone was laid on August 14, 1887 and on November 7, 1892, the Archbishop Anthony Cardinal Fischer assisted on the solemn consecration of the church. The church of St. Mary received the title of the Immaculate Conception of Mary and All Saints.
Image by Tohma on Wikimedia under Creative Commons License.