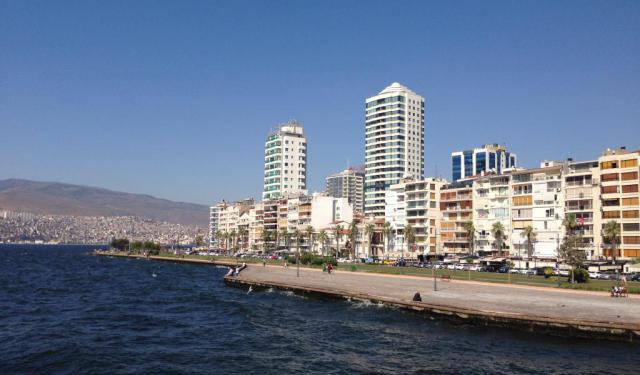 Image by Dario Moreno on Wikimedia under Creative Commons License.

Izmir is a big city and popular among tourists not only for that fact, but also because the region has an important historical significance. The history of Izmir dates back more then 3500 years and offers numerous famous landmarks, important religious sights, shopping venues and entertainment options - some of which are located in downtown Izmir.
How it works: Download the app "GPSmyCity: Walks in 1K+ Cities" from iTunes App Store or Google Play to your mobile phone or tablet. The app turns your mobile device into a personal tour guide and its built-in GPS navigation functions guide you from one tour stop to next. The app works offline, so no data plan is needed when traveling abroad.

The Anglican Episcopal Church of St. John the Evangelist, also known simply as St. John's, is located in Izmir. The present site was bought specifically for the purpose of building a church, after the British Consulate was rebuilt without provision for a place of worship. The building was built with money raised by local people. The foundation stone was laid in November 1898 and the church was completed in 1899.

The church seats about 150 people. The baptismal font is traditionally placed near the main entrance to the church to symbolise the fact that it is by baptism Anglicans become members of the Church of Christ. The font is in the shape of a shell, an ancient Christian symbol of pilgrimage. The east window can be seen on entering the church with a traditional depiction of the crucifixion of Jesus, with his mother Mary on his right and St. John on his left. Amongst the other items within the church inventory are a pair of crosses laid on the altar table whose style suggests origins of Russia and Ethiopia respectively.

Izmir Gündoğdu Meydanı is a very important square in Izmir. It is located within the Alsancak district and consequently many of the city events, concerts, rallies and other public celebrations are held at the venue. It is also a very beautiful place on the bank of the sea.
Image by Olgunkin on Wikimedia under Creative Commons License.
3

Kulturpark is a very popular and important tourist attraction, but is also heavily regarded among the locals. The park is very large and contains beautiful views of plants and flowers. Kulturpark also provides a museum, the Atatürk Open-Air Theatre, İsmet İnönü Art Centre, zoo as well as an area for children's entertainment.
Image by Vikimach on Wikimedia under Creative Commons License.
5

Çorakkapı Camisi is a very popular and busy mosque. It is located on Anafartalar street. The mosque is believed to be built in 1747. It was constructed in stone with a beautiful octagonal dome in the center as well as three separate domes. Çorakkapı Camisi also features arched windows, a marble pulpit and single minaret.
Image by mcost on Flickr under Creative Commons License.
6

Hatuniye Camisi is also located on Anafartalar street. It was built by Hacı Hüseyin Babes Tayyibe for his wife in 1739. The mosque has a big dome supported by three smaller domes. The pulpit of the mosque is done in wood and decorated with geometric motifs. Last but not least, Hatuniye Camisi offers a single minaret with a balcony.
Image by mcost on Flickr under Creative Commons License.
7

Situated on the northern slopes of the Pagos hills, Agora was the commercial, judicial and political nucleus of the ancient city and is now the center for artistic activities and for teaching. Izmir Agora Open Air Museum consists of five parts, including the agora area, the base of the northern basilica gate, the stoa and the ancient shopping centre. The agora of Smyrna was built during the Hellenistic era. After a destructive earthquake in 178 AD, Smyrna was rebuilt in the Roman period, according to an urban plan drawn by Hippodamos. It was constructed on a sloping terrain in three floors, close to the city center. The terrain is 165 m wide and 200 m long. It is bordered on all sides by porticos. Because a Byzantine and later an Ottoman cemetery were located over the ruins of the agora, it was preserved from modern constructions. This agora is now the largest and the best preserved among Ionian agoras.
Image by Panegyrics of Granovetter on Flickr under Creative Commons License.
Sight description based on wikipedia
8

Kadifekale (literally "the velvet castle" in Turkish) is the name of the hill located within the urban zone of Izmir, Turkey, as well as being the name of the ancient castle on top of the same hill. Both the hill and the castle were named Pagos (Pagus under the Roman Empire) in pre-Turkish times. The summit where the castle is found is located at a distance of about 2 km from the shoreline and commands a general view of a large part of the city of Izmir, as well as of the Gulf of Izmir. Administratively, the hill area covers six quarters constituted by slums in their large part, one named Kadifekale like the hill, and others Alireis, Altay, İmariye, Kosova and Yenimahalle. In 2007, the metropolitan municipality of Izmir started renovation and restoration works in Kadifekale.
Image by Mr. E. Unlu on Wikimedia under Creative Commons License.
Sight description based on wikipedia

Izmir is one of the most popular tourist destinations in Turkey. This is widely due to the number of attractions as well as the diversity of the city. Karataş is an especially popular neighborhood in Izmir and one that provides several outlets near the waterfront as well as close to the downtown.