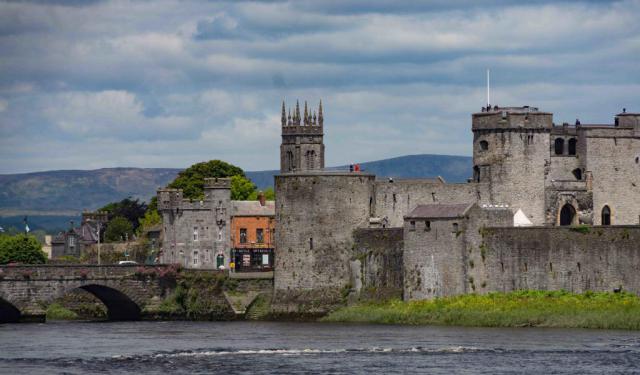 Limerick is one of Ireland's main tourist destinations, located just a 15-minute drive from Shannon Airport. Tourism is growing at a spectacular rate in this region. The city is the first to provide visitors with 'Street Ambassadors' that help tourists make their stay more enjoyable and help them out.

As a city that dates back to pre-Viking times, Limerick has seen its fortunes rise and fall many times over the course of more than a millennium. Today, the city retains a rich heritage of beautiful buildings that highlight some of the different times and styles Limerick has seen.

Take this orientation walk to visit the most popular attractions of Limerick.
Image Courtesy of Flickr and William Murphy.
How it works: Download the app "GPSmyCity: Walks in 1K+ Cities" from iTunes App Store or Google Play to your mobile phone or tablet. The app turns your mobile device into a personal tour guide and its built-in GPS navigation functions guide you from one tour stop to next. The app works offline, so no data plan is needed when traveling abroad.

The Treaty of Limerick ended both the Siege of Limerick and the war between the Jacobites and the supporters of William of Orange. The treaty protected the rights of the defeated Jacobite landed gentry who chose to remain in Ireland, most of whom were Catholics. This irregular block of limestone, which once served as a mounting block for horses, was where the agreement was signed in October 1691. To this day, Limerick is still sometimes referred to as the Treaty City.
Image Courtesy of Flickr and William Murphy.
Sight description based on Wikipedia.
2

The Saint Munchin's Catholic Church is located right opposite the Treaty Stone. This beautiful Romanesque style structure was built in 1922, reputedly on the site of an earlier church dating from 1744. Look out for the wonderful Christian and Celtic symbols etched into the stained glass windows and rose windows of this very elegant church.
Image Courtesy of Wikimedia and William Murphy.
3

Image Courtesy of Flickr and William Murphy.
Sight description based on Wikipedia.
4

Today the Cathedral is still used for its original purpose as a place of worship and prayer for the people of Limerick. It is open to public 6 days a week and on Sunday for worship and visitors are most welcome.
Image Courtesy of Flickr and William Murphy.
Sight description based on Wikipedia.
5

Designed by English architect Philip Charles Hardwick, St. John's Cathedral dates from the early 1860s. It features an impressive tall steeple, which was added in 1883 based on a design by M.A. Hennessy. The exterior of St. John's was completely refurbished in 2004, with new roofing and renewed stonework. Today the cathedral cuts an imposing presence on an otherwise undeveloped side of the city centre. You can also visit an important historical Protestant church nearby.
Image Courtesy of Flickr and William Murphy.
Sight description based on Wikipedia.
7

First built in 1830, the Milk Market was originally supported by the city walls on one side. Renovated in 1994, it has become an important Limerick landmark. Open all week long, the market offers all kinds of farm products, with a number of newly-built shops on site as well. Look out for the buskers that make your shopping experience a real treat. On Fridays the market is transformed into an arts and crafts fair.

O'Connell Street (Irish: Sráid Uí Chonaill) is the main thoroughfare of the city of Limerick. It was previously known as George's Street (after George III) until it was renamed after Daniel O'Connell. The street runs in parallel to the River Shannon and forms part of an overall thoroughfare, along with Rutland Street and Patrick Street, that bisects Limerick City Centre in a north east to south west direction. The street is about a mile in length, starting at the Arthurs Quay / Denmark Street junction and ending at The Crescent. A monument to Daniel O'Connell stands at the centre of The Crescent overlooking O'Connell Street. The street is noted for its Georgian architectural heritage.

Retail outlets on O'Connell Street include Brown Thomas, Debenhams and Penneys, while O'Mahony's have a large bookstore there founded in 1902. The George Hotel is also located on the street, which also acts as a regional financial services centre with a number of large retail banking operations, including Bank of Ireland, AIB, Permanent TSB, Ulster Bank and KBC Bank.
Image Courtesy of Flickr and William Murphy.
Sight description based on Wikipedia.
10

The O'Connell Monument is one of Limerick’s most famous monuments. It was erected in 1857 in honor of Daniel O'Connell, a very influential Irish politician from the 19th Century. This bronze statue depicts O'Connell bearing the Act of Catholic Emancipation.
Image Courtesy of Wikimedia and Stevesphotography.