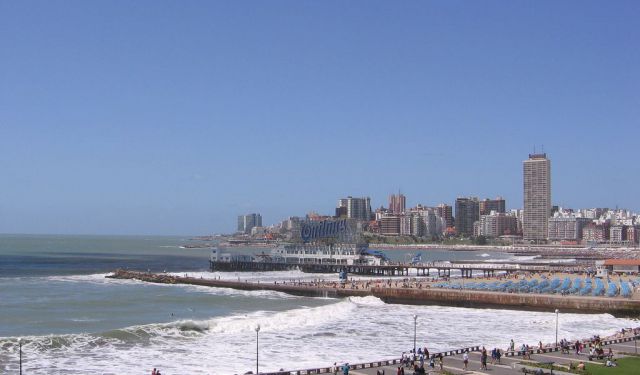 Image by boreritos on Flickr under Creative Commons License.

Mar del Plata is a fascinating seaside province with plenty of historical buildings, imposing landmarks, stunning churches, and an unforgettable Latin atmosphere. The most outstanding attractions include Catedral de los Santos Pedro y Cecilia, Chateau Frontenac Hotel and Edificio Demetrio Eliades. Take the following tour to discover the most outstanding attractions in downtown Mar del Plata!
How it works: Download the app "GPSmyCity: Walks in 1K+ Cities" from iTunes App Store or Google Play to your mobile phone or tablet. The app turns your mobile device into a personal tour guide and its built-in GPS navigation functions guide you from one tour stop to next. The app works offline, so no data plan is needed when traveling abroad.

Located downtown Mar del Plata, the Terminal de Micros building is of great interest to locals and tourists. Designed by architect J. Dormal, the edifice provides an imposing façade, especially the decorative elements, the clock tower, the arch and the two beautiful domes. The front of the edifice was repeatedly modified, and today it has a more modern and unusual look. Originally, the front designs of the building could be seen backwards but currently they are on Alberti Avenue, facing the center of the city. It features a central vestibule, shops, platforms, restaurant and different rooms for women.
Image by Ojota on Flickr under Creative Commons License.
2

The imposing Capilla Stella Maris was built in 1908 and is interesting due to its beautiful façade and interior, designed by O. Basualdo. Located at the intersection of Vialmonte and Almirante Brown Streets, the chapel features a neo-gothic architectural style and unique ornaments. Originally, the temple was a school-church and here began worship in this country. At the top of the chapel, visitors can admire the beautiful sculpture which represents the patron saint, as well as the interior elements, especially the altar symbolizing the open sea on which Stella Maris floats. All the religious items found inside were donated by various people.
Image by Dario Alpern on Wikimedia under Creative Commons License.
3

Situated just few blocks from the center of the city, the mansion is a copy of a hotel in Quebec and features Spanish Renaissance and French colonial architectural styles. Designed by the famous architect A. Bustillo, it is considered one of the most interesting attractions on the coast and known throughout the country. The luxurious building was remodeled twice. It contained 90 lounges and was an impressive five-star hotel. Today is not open, but visitors can still admire its exciting architecture.
Image by Pipo Gauchito on Flickr under Creative Commons License.
4

Situated on the well-known Peralta Ramos Avenue, the Edificio Demetrio Eliades is the highest skyscraper in town and the second tallest in Argentina. Considered one of the most remarkable structures in the world, it was designed by J. Dompe, the same architect who created other important skyscrapers in Mar del Plata. Completed in 1969, it is also known as Havanna due to the logo of the Havanna factory placed above the building. The rooms on each floor overlook the beautiful city and the beaches.
Image by dr_pablogonzalez on Flickr under Creative Commons License.
5

Located in the center of the biggest tourist city in the entire country, the Hermitage Hotel is remarkable for its majestic and distinctive architecture. The facade features great golden friezes and Louis XV ornaments, and the main hall is decorated in a classical style. Inside you can admire old photographs of Mar del Plata which adorn the halls and a very beautifully decorated vestibule bar. The hotel is an imitation of the Rio's Copacabana Palace and in 2002, the owner added the old Torre Colon edifice to its hotel and restored it in the same style with the current building. Inaugurated in 1943, the hotel provides rooms and halls with comfortable antique furniture and other valuable historic pieces. The rooms offer picturesque views of the ocean and the city, and are located close to the airport and minutes from the famous shopping centers.
Image by DagosNavy on Wikimedia under Creative Commons License.
6

Founded in 1960, the Palacio Cosmos is one of the most remarkable buildings in Mar del Plata and a most important resource of the country. Designed by the popular architect of the most important buildings in Mar del Plata, J. Dompe, it is noteworthy for its beautiful style, straight lines and wonderful exterior views. The edifice is also known by locals as the Pepsi Building because of the company's logo placed above it for an extended period of time. Visitors can recognize it by its “L” shape, which gives the building uniqueness.
Image by fernandosouza on Flickr under Creative Commons License.
7

Located in front of Plaza Colon, the Palacio Eden was one of the first skyscrapers in the city and one of the most representative urban landscapes in the country. Dating back to 1958, the building features a lovely vestibule decorated with pottery and was designed by the architect J. A. Dompe in a classic style which characterized the town for a long period of time. The modern edifice faces the picturesque Rambla de Mar del Plata and the sea with Playa Bristol.
Image by fernandosouza on Flickr under Creative Commons License.
8

Situated in front of the well-known Plaza San Martin, the temple was established in 1905, but the foundation was laid in 1893 to honor Saint Peter, and is considered the third-largest church in the country. Designed by architect P. Benoit, the chapel was built in neo-gothic architectural style. The exciting exterior features chaotic lines in the center of the tower, numerous turrets, arches and columns, and wonderful stained glass windows which were brought from France. The church interior is known for its ceiling made of colored terracotta, the mosaic floor, the main chandelier and the Italian altar created the same year as the construction of the chapel upon which can be seen religious relics.
Image by fernandosouza on Flickr under Creative Commons License.
9

Dating back to 1873, the chapel is under the protection of Virgin Santa Cecilia and is the original foundation of Mar del Plata. Created by Francisco Beltrami, the church was listed as a National Historic Landmark in 1971 and it features the neoclassical architectural style. Visitors can also admire the bell tower, the two sculptures depicting guardian angels, the beautiful facades of stone and lime with triangular ornaments and simple lines. The chapel has also educational importance for the culture and history of the city due to the Sisters of Our Lady of the Garden, annexed to the chapel.
Image by Daniko on Wikimedia under Creative Commons License.
10

The firm was founded in 1948 by Benjamín Sisterna, Demetrio Elíades and Luis Sbaraglini and began its activities as a producer of alfajores in the city of Mar del Plata. Sisterna was a baker. The first product he made was "Alfajores Santa Mónica", created along with his partner Sbaraglini. These alfajores were offered at some points of sale in Buenos Aires for a brief time.

The products of Confitería Havanna were made to the same formula used today. Following the success of the chocolate-flavoured alfajores, other varieties were added. For a long time Havanna's alfajores were chosen by the tourists who spent their vacations at the popular seaside resort and the Havanna brand became representative of the city and of Argentina as a national product.

One key to Havanna’s long presence in the market has been the opening of coffee stores (which sell not only different varieties of coffee, but also the classic and popular Havanna products like alfajores, lemon cookies, brownies, cakes and other chocolate and dulce de leche desserts). The concept was named "Café Havanna" and the business expanded successfully, with 230 points-of-sale throughout Argentina.

Image by Alejandro Gabriel Alonso on Flickr under Creative Commons License.
Sight description based on wikipedia