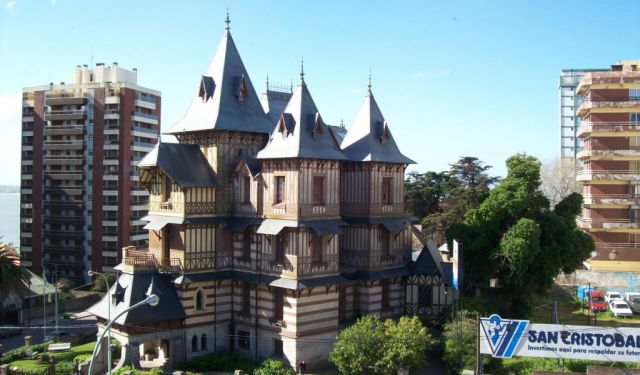 Image by Dario Alpern on Wikimedia under Creative Commons License.

Mar del Plata is a major town for cultural attractions for tourists. For those interested in art and culture, there are theaters which provide live music and great cultural performances, as well as a large number of museums with interesting artifacts on display. Take the following tour to learn more about the culture of Mar del Plata.
How it works: Download the app "GPSmyCity: Walks in 1K+ Cities" from iTunes App Store or Google Play to your mobile phone or tablet. The app turns your mobile device into a personal tour guide and its built-in GPS navigation functions guide you from one tour stop to next. The app works offline, so no data plan is needed when traveling abroad.

The oceanfront city was given its first municipal museum of fine art in 1938, when the facility was inaugurated in the Mar del Plata City Hall. The museum gathered a collection of mainly modern art in subsequent decades, and in particular works by local realist painter and muralist Juan Carlos Castagnino. The museum's collections feature nearly 600 paintings, sculptures, lithographs, photographs and other works, including those by Argentine artists Antonio Berni, Alberto Bruzzone, Prilidiano Pueyrredón, Luis Seoane, Raúl Soldi, and Juan Carlos Castagnino, for whom the museum was renamed in 1982, and of whom the museum houses 138 works.

Image by eMaringolo on Flickr under Creative Commons License.
Sight description based on wikipedia
2

Located in the heart of the town, the monument is a remarkable symbol of Mar del Plata which became the most photographed sculpture for tourists. Originally inaugurated in 1940, the statue is made of local stone and is located here because the former settlements of the sea lions could be found on Playa Bristol. Made by the famous sculptor Fioravanti, the sculpture shows the location of the stairs which lead down to the Playa Bristol.
Image by Erik Stattin on Wikimedia under Creative Commons License.
3

Founded in 1892 and officially opened in 1924, the Teatro Colón is notable for its unique architecture and the richness of its performances. Situated near Plaza San Martin, the theater was designed by architect A. Pascual and is considered an original work of huge importance to the history of Mar del Plata. The building is an example of Spanish architecture with neo-colonial interiors. The exterior facade is decorated with Gothic elements and Renaissance arches and is dominated by a central spire of old stone and two low towers. It also features Gothic windows formed by arches of graved stone and Renaissance balustrades. The theatre is home to important cultural events throughout the year and other theatrical activities with famous artists from Mar del Plata.
Image by Aleposta on Wikimedia under Creative Commons License.
4

Situated in the center of Mar del Plata, the building is a well-known place for locals and tourists due to its beautifully-colored facade and the interesting cultural events which it hosts throughout the year. The building houses the municipal library of the city and a cultural center. The center provides various interesting activities for the entire family, ranging from movies and theater to all kinds of music and great collections of books. It is a great option for visitors who want to enjoy a family outing where good shows are guaranteed.
Image by Ojota on Flickr under Creative Commons License.
5

Situated in Plaza Espana, this the first museum that attracted scientists from all over the world and many other paleontologists who came to study and see its interesting collections. Officially inaugurated in February 1938, the museum is divided into two important sections: a hall which hosts exhibits of scientists, and the other which houses the dinosaurs’ collection, an aquarium with fresh water and a park for children which makes the museum a favorite. It also displays some of the most important specimens of the country, species of mammals, fish fauna and scientific articles related to zoology and paleontology. Another popular exhibition of the museum is the collection of the priest G. Scaglia which presents historical documents, vintage coins and other archeological items.
Image by Fernando Reisner on Flickr under Creative Commons License.
6

Situated in Quilmes Athletic Club, the Quilmes Restaurant is one of the oldest in Mar del Plata. The restaurant provides a comfortable atmosphere and an environment perfect for different types of events such as business meetings or social events and first class shows. The restaurant contains three VIP rooms on the first floor, big TVs, air-conditioning, great music and a recreation area for children with a large plastic castle and table games. The restaurant also offers fine cuisine, quality authentic meals and unique desserts.
Image by waferboard on Flickr under Creative Commons License.