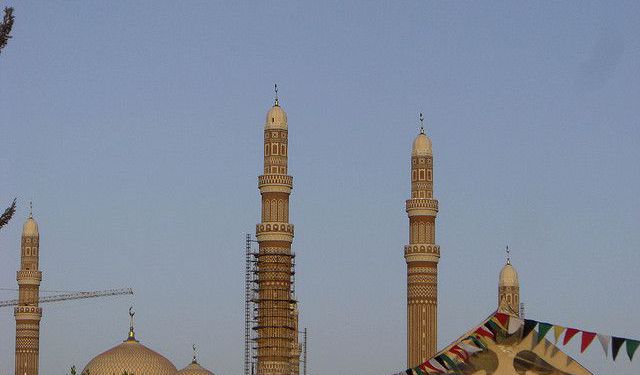 Sanaa, a beautiful Arabian city with a heavy concentration of unique architectural landmarks, as the capital of Yemen contains the country’s best mosques, parks and attractions. Take the following tour to discover Sanaa’s modern district, see Yemen’s most beautiful mosque and other popular sites.
Image Courtesy of Flickr and mcmay.
How it works: Download the app "GPSmyCity: Walks in 1K+ Cities" from iTunes App Store or Google Play to your mobile phone or tablet. The app turns your mobile device into a personal tour guide and its built-in GPS navigation functions guide you from one tour stop to next. The app works offline, so no data plan is needed when traveling abroad.

The Saleh Mosque or Al Saleh Mosque is the largest and most modern mosque in Sana'a. Inaugurated in November 2008, it is named after Yemeni President Ali Abdullah Saleh. It can hold up to 40,000 worshippers and cost nearly 60 million US dollars to build. At the time of construction and opening, it was criticized for being too expensive in relation to Yemen's general impoverishment.

The mosque was built in a Yemeni architectural style and includes wooden roofs, 15 wooden doors which are 22.86 meters (75 feet) in height and include engraved copper patterns as well as 6 large minarets, 4 of which are 160 meters (525 feet) in height. It is surrounded by sprawling gardens.

Image Courtesy of Flickr and Yoann BELLANGER.
Sight description based on Wikipedia.
2

Al-Sabeen Square, a place for Sanaa’s significant events and celebrations, is named in honor of the seventy day siege in 1967 and 1968 when the Republican Armed Forces were victorious and the Yemen Republican Government was established. On this square you will find the Memorial to the Unknown Soldier, beautiful lighting, lawns and flowerbeds.
Image Courtesy of Wikimedia and Aymx.
3

Fun City is a popular attraction with rides that children and the entire family will enjoy. Located near Sabeen Park, it also features several playgrounds and a bowling alley. Admission is quite reasonable, equivalent to about one American dollar.
Image Courtesy of Flickr and Anna Bukhari.
4

West of Fun City at the intersection of 60 Meters Road and Hadda Street you will find the beautifully designed Al-Seteen Square. In the center of this square is a large white arch, a modern landmark that attracts the attention of passersby.
Image Courtesy of Flickr and Sallam.
5

Al-Saba'een Park, a beautiful green space, hosts a variety of festivals and concerts. Located on 45 Meters Road near Fun City, it is Sanaa’s largest public park. A great place to relax, both locals and tourists come here to admire its lovely scenery and elegant landscaping.
Image Courtesy of Flickr and mcmay.
6

Serving delicious Arabian and Yemeni cuisine, Al-Shaibani Super Deluxe is one of Sanaa’s most popular restaurants. Located on Hadda Street near the Al-Kumaim Trade Center, its interior design is a blend of traditional Yemeni and modern elements. Be sure to try the dessert of bananas with honey.
Image Courtesy of Flickr and stu_spivack.