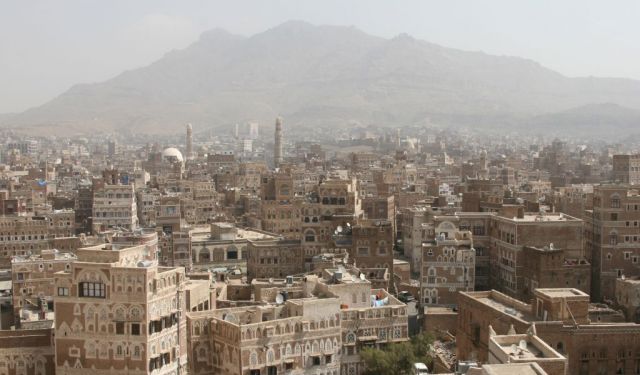 Dating back to the 10th century BC, Sanaa is one of the world’s oldest cities. Its historic district is a UNESCO World Heritage Site. Its astonishing architecture, including houses originally decorated with friezes and beautiful stained glass windows, are unique. Take the following tour down the ancient streets of Sanaa’s Old Town and discover thousands of years of history.
Image Courtesy of Wikimedia and Ferdinand Reus.
How it works: Download the app "GPSmyCity: Walks in 1K+ Cities" from iTunes App Store or Google Play to your mobile phone or tablet. The app turns your mobile device into a personal tour guide and its built-in GPS navigation functions guide you from one tour stop to next. The app works offline, so no data plan is needed when traveling abroad.

Sanaa, which means “fortified city,” has a thick clay wall surrounding the Old Town. It is home to nearly 6,500 houses, 100 mosques, several bathhouses, offices and stores. Ranging from nine to fourteen meters high, its wall initially had seven gates, though only one remains today.
Image Courtesy of Wikimedia and Jialiang Gao.
2

The main gate to the Old Town, Bāb al-Yaman, is one of Sanaa’s most notable attractions, the one remaining of the original seven. Over 700 years old, it was rebuilt by the Turks in the 19th century. After the revolution of 1962 it was renamed Liberty Gate. From atop the gate you can get a great view of the surrounding landscape.
Image Courtesy of Flickr and mcmay.
3

Suq al-Milh, or the Salt Market, is an outdoor shopping bazaar where you can find nearly anything, from spices, clothing, fruits and vegetables, to bronze and silver knives and other handcrafted items. This extensive shopping district is a great place to find a great bargain.
Image Courtesy of Flickr and oledoe.
4

Built by the Turks, Sanaa’s Old Town contains 15 hammams, or bathhouses. Still frequented among locals, Hammam al-Mayday near Ghumdan Fortress is the most popular one in the city. Open until late at night, the hammams include separate facilities for men and women.
Image Courtesy of Flickr and laszlo-photo.
5

Ghumdan Palaceis an ancient palace and fortress in Sana'a. It may date to pre-Islamic times, constructed by the Sabaeans in the mid 3rd century by the last great Sabaean King Ilsharah Yahdub, although some historians date it to the beginning of the 2nd century or even the 1st century. The palace was destroyed by Caliph Uthman, or even earlier, by the Abyssinian conqueror Abrahah Al-Hubashi. Restored several times, the palace history is rich in legends and tales. Ghumdan Palace tower, a 20-storey high rise building, is believed by some to have been the world's earliest skyscraper.Though the old palace is now in ruins, its style, a towered, multi-floor structure, has provided the prototype for the tower type houses built in Sana’a.The palace was used by the last Himyarite kings who had ruled Yemen from Ghumdan and was once the residence of Abhalah.It was reportedly destroyed by Caliph Uthman in the 7th century because he feared it could be used as a stronghold for a rebellion. The palace was rebuilt some time later.

Most claims are between six and ten storeys. However, al-Hamadi claims it to have been 20 stories high with each floor being 13 meters in height, perhaps referring to the tower of the palace. Built over a square layout, the four outer faces of the palace were of marble in white, black, green and red. The top floor of the tower contained the Bilqis Hall. The four openings at the four corners of the hall provided a closer view of the moon, worshiped by kings in ancient Yemen.

Image Courtesy of Flickr and Elsie esq..
Sight description based on Wikipedia.
6

On the east side of Sanaa’s Old Town you will find the impressive Qubbat al-Bakiriya Mosque. Erected in 1597, this Turkish architecture was renovated and details were added in 1872. Today you can see a blending of styles, with Turkish cupolas and a minaret constructed in the Yemen tradition. An active mosque to this day, this beautiful edifice is a great subject for photographs.
Image Courtesy of Flickr and kevincure.
7

Jami' al-Kabir, one of the world’s oldest mosques, was founded in 705. It has an inner courtyard surrounded by galleries and tall minarets. Suffering damage from flood and war in the 9th and 10th centuries, in 1130 Queen Arwa ordered the mosque be rebuilt with additional details. It is famous as the site where the oldest Koran, dating back to the 7th or 8th century, was found by workers in 1972.
Image Courtesy of Flickr and Ai@ce.
8

For centuries the Old Town Secret Gardens has been used for growing spices, herbs and decorative plants. A great place to take a walk, you will find many city residents strolling along its narrow footpaths enjoying the beautiful foliage.
Image Courtesy of Flickr and mavilimon.