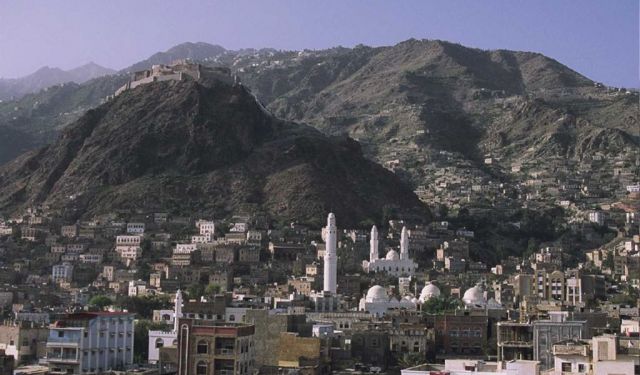 Bir-al-Azab, within Sanaa’s Old Town, appeared in the 14th century as a place for state institutions and residences for the city’s aristocracy. This district’s central point, Al-Tahrir Square, is surrounded by museums and a number of cafes, restaurants and shops. Take the following tour to discover the fascinating attractions in Sanaa’s Bir-al Azab district.
Image Courtesy of Wikimedia and txago.
How it works: Download the app "GPSmyCity: Walks in 1K+ Cities" from iTunes App Store or Google Play to your mobile phone or tablet. The app turns your mobile device into a personal tour guide and its built-in GPS navigation functions guide you from one tour stop to next. The app works offline, so no data plan is needed when traveling abroad.

Bab al Sabah Street Market begins at Shari’Ali’Abdul Mughni and ends at the entrance of the Old Town. This open air market specializes in fruits, vegetables, live poultry, spices and coffee. Take a walk through this wonderful market, enjoy the scent of exotic spices and find some great bargains.
Image Courtesy of Flickr and Franco Pecchio.
2

Al-Mehdi Abbas Mosque, on the west end of the Old Town, is a beautiful architecture built in 1759. It has a beautiful minaret, a large dome and a finely decorated wooden ceiling. This gorgeous white mosque is maintained regularly to keep its attractive appearance.
Image Courtesy of Flickr and Omar A..
3

The luxurious Sheba Hotel, located on Ali Abdolmoghni Street, houses a delicious pastry shop in its lobby, as well as several restaurants offering a wide range of fresh tasty dishes, including Italian and Yemen cuisine. You will also find a bookshop and coffee house inside this great hotel.
Image Courtesy of Flickr and Nikchick.
4

Al-Tahrir Square, located between two major city districts, is considered Sanaa’s main plaza. It features an assortment of restaurants, hotels, shops, travel agencies and the city’s main post office. In the center of the square is a beautiful fountain, and it is surrounded by the country's most important museums. A central hub from where you can take a bus to any part of the city, this beautiful square is also a popular meeting place for locals.
Image Courtesy of Flickr and nicolasnova.
5

The National Museum of Yemen in Sana'a, Yemen, was founded in 1971 in Dar al-Shukr (Palace of Gratefulness) which is one of the Yemeni Imam Palaces. It is located near Qubbat al-Mutawakkil Mosque dome in Al-Tahreer Square in the city center. The Museum recently moved to a nearby building called Dar Al-Sada (Palace of Happiness). The relocation was made to the newly renovated Palace because it offers the necessary space to accommodate the increasing number of artifacts throughout the history of Yemen.

The museum contains the artifact of ancient Yemen collected from different archaeological sites. The National Museum consists of the four-story building and its room has been reserved for the presentation of rare artifacts and monuments. The exhibits include the artifacts of a Yemeni Imam, artifacts from Marib, ancient Kingdoms of Yemen and artificat from the Islamic States era.

Dar al-Shukr was converted into National Heritage Museum in 1991 but has been closed since years ago due to the lack of preparations and overhaul. The museum housed over 30 thousand antiquity pieces as per 2007.

Image Courtesy of Wikimedia and Bernard Gagnon.
Sight description based on Wikipedia.
6

The Sanaa Military Museum, located on Tahrir Square, is a popular attraction consisting of ten halls displaying weapons and other military objects from ancient times to the present day. You will also find statues of historic figures and other significant artifacts which illustrate the development of this ancient city.
Image Courtesy of Wikimedia and Email4mobile.
7

Sana'a University was established in 1970 as the first and the primary university in the Yemen Arab Republic.

When Sana'a university was first established, it included only two faculties. In 1974, those specialties were developed and formed three new faculties. Also, the Faculty of Sharia and Law celebrated the launch of the Business Department, which became an independent faculty a year later. By that time, the university included five faculties and continued expansion until it included the rest of the other specialties. In 2000, the university included 17 faculties, ten of which were in Sana'a including all type of Academic specialties and the rest were spread in different provinces around the country.

Image Courtesy of Flickr and Rocco Lucia.
Sight description based on Wikipedia.