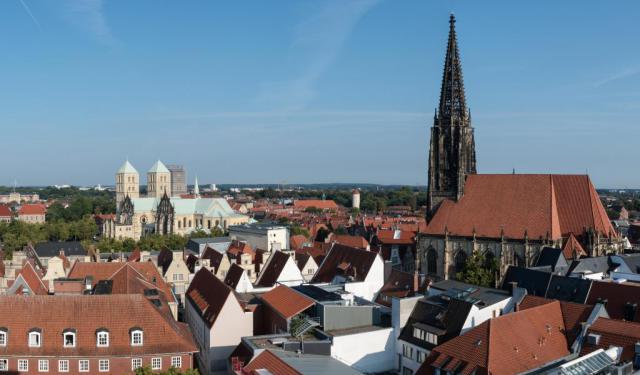 Münster, a city in western Germany, makes the list of Germany's top tourist destinations primarily for its Medieval architecture. The most notable sights include 13th-century St. Paulus Dom featuring a mix of Gothic and Romanesque styles, Prinzipalmarkt square framed by gabled houses, the Gothic city hall, and late medieval Lambertikirche. For these and other pearls of Münster architecture, follow this orientation walk.
Image Courtesy of kaʁstn Disk.
How it works: Download the app "GPSmyCity: Walks in 1K+ Cities" from iTunes App Store or Google Play to your mobile phone or tablet. The app turns your mobile device into a personal tour guide and its built-in GPS navigation functions guide you from one tour stop to next. The app works offline, so no data plan is needed when traveling abroad.

Münster Cathedral (St. Paulus Dom) is a cathedral in the German city of Münster. It is the city's main church and one of its most important historical monuments, as well as the center of the Diocese of Münster since Diocese's foundation in 805. Perhaps the most famous feature of the cathedral is its astronomical clock. Unlike modern clocks, the Münster clock is divided into 24 hours, runs counterclockwise, and indicates hours and minutes simultaneously. Since the clock faces south, the hands thus follow the actual course of the sun. The main hand, decorated with a silver sun and a rainbow, indicates the time. Each red and white line within the circle of Roman numerals represents four minutes. Five minor hands indicate the position of the planets Jupiter, Mars, Venus, Saturn and Mercury, while a silver ball (half painted black) represents the moon in its phases.
Image Courtesy of Wikimedia and Dietmar Rabich.
Sight description based on Wikipedia.
2

The Stadthausturm is the only remaining part of the former city hall, it is located at the southern end of the Prinzipalmarkts. The Stadthausturm was built in 1907 by German architect and construction officer, Alfred Hensen. Fortunately, the tower was not affected by WWII and has remained almost intact. Since 2001, the tower houses the Children charity organization “Maxi Turm”. The Stadthausturm also features a simulated bell, which reproduces the ringing of the bells at 11 am, 3 pm and 7 pm.
Image Courtesy of Wikimedia and Rüdiger Wölk, Münster.
3

Along with the St. Paulus Dom, the City Hall is one of Münster's most significant monuments, and the city's symbol. The City Hall represents the truly amazing architectural craftsmanship of the 13th - 14th century. Its 31-meter western facade is the structure's main decoration and is built out of sandstone in the best Gothic-style traditions. The City Hall is especially famous as the place where the Peace of Westphalia was signed, putting an end to the Thirty Years' War and declaring the Netherlands as an independent state. The Historic City Hall also houses a collection of works of art, models of weapons, flags and other historic tidbits gathered since the middle of the 17th century. You can see instruments of torture and execution, silverware, armor and other antique items of great historic and artistic value.
Image Courtesy of Wikimedia and Dietmar Rabich.
4

The Lambertikirche (St. Lamberti Church) is located at the crossroads of the two oldest streets in Münster, in the heart of the old town. The church building is considered to be a pure demonstration of late Gothic style in Westphalia. The church has maintained a curious tradition- every night, except Tuesdays, the tower keeper climbs the clock tower and blows his horn every half an hour, from 9pm to midnight. This tradition has also been maintained in Bad Wimpfen, Nördlingen and Krakow. The construction of the church dates back to the 14th century. Since that time, the building has been restored and reconstructed several times before it has reached the shape it demonstrates today. The amazing Gothic tower of the church was built in 1889 by two young architects, Hilger and Bernhard Hertel. During the Second World War, the roof and the tower were partially destroyed. The reconstruction works continued until 1959. The Lambertikirche has one more interesting and scary feature – the baptist baskets. In 1535 these baskets were attached to the tower containing the bodies of Jan van Leiden, Bernd Krechting und Bernd Knipperdolling, after their torture and execution. Today the originals of these baskets are hanging at their historic place as a tourist spectacle.
Image Courtesy of Wikimedia and Günter Seggebäing, Coesfeld.
5

The Stadtmuseum was established on August 31st, 1982 and focuses on the history of Münster. This museum is one of the most popular spots in town, for example in 2005 the number of visitors reached a record mark of 100,000 and in 2011 this number noticeably increased to 113,000 visitors. Spread over two floors, its 2,500 square meters space is filled with items that tell the history of Münster's foundation and development. The museum exhibits models of the city of Münster during different stages of its history. Along with permanent collection, the museum systematically organizes special temporary exhibitions dedicated to the works of famous artists born in Münster, as well as to the various events that took place in the city. The Stadtmuseum also features an amazing photo-gallery, sampling old pictures of Münster and its inhabitants.
Image Courtesy of Wikimedia and Florian Adler.
6

The Erbdrostenhof building is one of the most beautiful structures in Münster. This architectural masterpiece was raised by a Baroque architect, Johann Conrad Schlaun between 1753-1757. The Erbdrostenhof, together with Clemens and Dominican churches, forms the so called “Münster baroque island”. The building facade was carefully restored after the second World War, and today houses the Westphalian Conservation Office.
Image Courtesy of Wikimedia and Dietmar Rabich.
7

The Krameramtshaus is located on Alter Steinweg street in Münster, next to the St. Lamberti church. The premises were built in 1589 and served as the gathering place for members of the Kramergilde. The Krameramtshaus is one of the oldest buildings preserved till the present day without major restorations. Most of the other buildings were either destroyed or damaged during the second World War. The Krameramtshaus also has some historic value, it was the location of the Treaty of Westphalia signing. Since 1995, the building has been home to the cultural center “House of the Netherlands”. The cultural center has gathered the most extensive collection (65,000 volumes) of publications focused on the Dutch culture in Germany.
Image Courtesy of Wikimedia and Dietmar Rabich.
8

The Lotharinger Chorfrauenkirche is a former church building, it was designed by renown German architect Johann Conrad Schlaun in 1764. The church represents a square, Baroque style structure with rounded corners. The building was used for religious purposes until the closure of the Lotharinger monastery. The Lotharinger Chorfrauenkirche was badly damaged during the second World War and initially only its exterior and facade were restored. After a while, the interior was also redone and the building was used as a city archive. At the present moment, the building houses the Marriage Registry Office.
Image Courtesy of Wikimedia and STBR.
9

The Buddenturm is the oldest remaining part of the former city walls, it was built in 1150 as a 20-meter fortified tower and during the Middle ages it was used as a prison. At the end of the 17th century, the fortifications were demolished, however the tower itself was preserved, moreover 10 more meters were added to its height. After the second World War, the Buddenturm was restored and in 1992 it was given the status of historic monument.
Image Courtesy of Wikimedia and Dietmar Rabich.
10

The Überwasserkirche is a Gothic church in the western part of the city of Münster, Westphalia. Its name is translated from German as "Over the water" and originates from the fact that it is located west of the St. Paulus Dom, on the opposite side of the Münstersche Aa river. During the Middle Ages, the church was used as a school for young women of noble birth and for this reason the parish is also known as Liebfrauenkirche, which means the “Church of the Loving Women”.
Image Courtesy of Wikimedia and Dietmar Rabich.
11

The Schloss is one of the main tourist attractions in Munster. It is considered to be a true masterpiece of German architecture. The castle was built by famous Baroque architect Johann Conrad Schlaun, over a period of 20 years (1767-1787), and was originally meant as the main residence for the Prince Bishops. The building represents a fantastic Baroque complex similar to Versailles. Since 1954, the Schloss has been the seat and the symbol of the University of Münster. The castle complex was heavily damaged during the second World War, but was fully restored to its original form.
Image Courtesy of Wikimedia and Dietmar Rabich.
12

The Botanischer Garten Münster is a botanical garden maintained by the University of Münster. Located directly behind the Prince Bishop's Castle, within the castle grounds, it is open daily and doesn't have any admission charges. The garden was established in 1803 by Freiherr vom Stein for the university's medical faculty, with first greenhouses built in 1804. From 1806 to 1815, during the occupation of Westphalia by French troops and the Congress of Vienna, its emphasis changed from medicinal plants to a primary focus on indigenous plants. Its first seed catalog was issued in 1827, and its orangery was constructed in 1840. The tropical garden was organized in 1935 and is still considered to be one of the best in the country. The garden was severely damaged during World War II, but carefully restored with ensemble extensions. An artificial stream, meadow, and moor were created during the 1990s, and in 2005 a new medicinal garden was added. Today the garden contains about 8,000 species, including a major collection of 230 of the 280 known Pelargonium species. In addition to ten greenhouses (total area about 2,000 square meters), major garden sections are as follows: alpine garden with plants from the Alps and Pyrenees; arboretum, as well as birch-oak forest and Tilia-beech trees; Australia and New Zealand plants; cottage garden from the 1900s, featuring vegetables and herbs, Mediterranean plants, kept in the orangery in cold months; moor and heath, systematic garden of seed plants; tropical house; Victoria House, containing Victoria regia. The garden contains a good selection of rare and mature tree specimens in its arboretum, including orange trees that are over 200 years old.
Image Courtesy of Wikimedia and Rüdiger Wölk.
Sight description based on Wikipedia.