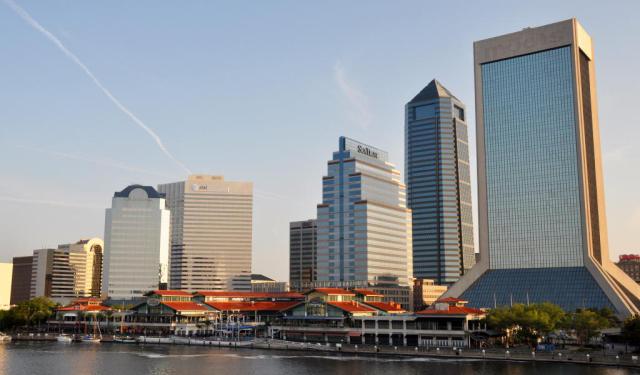 Image by gojeffrey on Flickr under Creative Commons License.

Museums and Galleries (Self Guided), Jacksonville

Jacksonville is a city that has just a few museums and galleries, but all of them are very interesting and educational. You should visit such beautiful places as the Cummer Museum of Art & Gardens and such unusual sites as the Forest Capital State Museum. Take our guided tour to discover the most worthy places and learn more about Jacksonville and Floridian history in general!
How it works: Download the app "GPSmyCity: Walks in 1K+ Cities" from iTunes App Store or Google Play to your mobile phone or tablet. The app turns your mobile device into a personal tour guide and its built-in GPS navigation functions guide you from one tour stop to next. The app works offline, so no data plan is needed when traveling abroad.

1) Museum of Science & History (must see)

Image by LoneStarMike on Wikimedia under Creative Commons License.
Sight description based on wikipedia
2

2) Museum Of Contemporary Art (must see)

In 2000, a series of preview exhibitions opened in a temporary exhibition space while the building facade was restored to its original Art Deco style. The interior was completely refurbished to house the Museum’s galleries, educational facilities, a theater/auditorium, Museum Shop and Café Nola. Total renovation was completed in 2003, culminating in a grand re-opening in May of that year.

After moving to its downtown location the Museum experienced rapid growth in both membership and the size of the permanent collection. The many substantial additions to the collection increased not only its quality, but also its size to almost 800 pieces. In November 2006, JMOMA became the Museum of Contemporary Art Jacksonville.

Image by Mocando on Wikimedia under Creative Commons License.
Sight description based on wikipedia
3

The LaVilla Museum is a museum of African American history and culture located in the Ritz Theater in Jacksonville. Opened in 1999, museum documents the culture and history of people of African descent (most slaves, some free, and not all Americans) in northeast Florida prior to that territory's entry as a U.S. state in 1845, as well as LaVilla neighborhood of downtown Jacksonville (which was once a large and thriving African American community).

LaVilla was home to so many poets, artists, musicians, authors, and playwrights that it was known as "the Harlem of the South". The highlight of the museum tour are two animatronic representations of James Weldon Johnson and J. Rosamond Johnson, LaVilla natives who composed the famous American Civil Rights Movement song, Lift Every Voice and Sing. Rooms in the building evoke African American life throughout the 20th century by recreating a typical home living room, a Christian church, a barber shop, and a school room.

Operation hours: Monday to Friday: 8 am – 5 pm.
Image by grifray on Flickr under Creative Commons License.
Sight description based on wikipedia
4

The Karpeles Manuscript Library Museum is one of ten Karpeles Manuscript Library Museums in the United States. It displays manuscripts and documents from the private collection of David and Marsha Karpeles, the world's largest such collection, as well as art exhibits. The museum opened in 1992 in the former First Church of Christ, Scientist building, constructed in 1921. Initially museum was privately owned by David Karpeles, a former math professor who had made millions investing in real estate and then taken up manuscript collecting. In 1983 he began opening museums across the country to house his collection, now the world's largest. The museum features three or four exhibits from Karpeles' collection a year, as well as exhibits from other collectors and around six art exhibits.

Operation hours: Tuesday to Saturday: 10 am - 3 pm.
Image by ProfReader on Wikimedia under Creative Commons License.
Sight description based on wikipedia
5

This unusual gallery was built by James Phillip Brown in 1994 and underwent a few renovations till 2006. Artist Jamali was an unusual, interesting person with his own point of view. His works are not common or boring. They are made with love and have a spirit of expressionism, which is a new art movement. You may see the art works and sculptures by these artists. All of them are unique and have their own energy, because the master put his soul in them.
Image by Mickael Casol on Flickr under Creative Commons License.