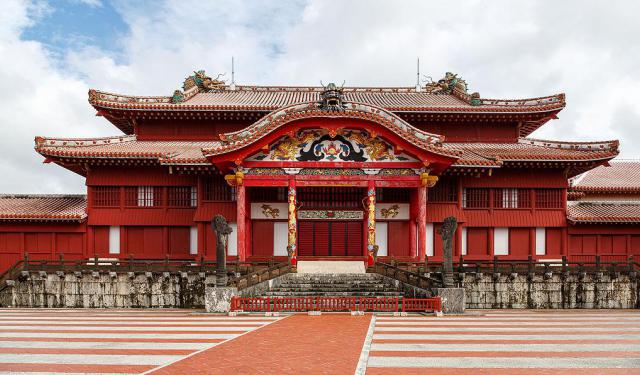 Naha, the capital of Okinawa, although small a city, does contain a plethora of historic attractions. If you decide to visit Naha, make sure to explore the Shikina-en Garden, Tamaudun Mausoleum, but most importantly, the Shuri Castle, a restored royal residence of the Ryukyu Kingdom, flourished throughout the 15th-19th centuries and recognized as the birthplace of Okinawa karate. Take this orientation walk to see the best sights of Naha.
How it works: Download the app "GPSmyCity: Walks in 1K+ Cities" from iTunes App Store or Google Play to your mobile phone or tablet. The app turns your mobile device into a personal tour guide and its built-in GPS navigation functions guide you from one tour stop to next. The app works offline, so no data plan is needed when traveling abroad.

Shuri Kannon-do, also known as Jigen-in was established in1616 as part of the Tenkai-ji temple. It is located in the vicinity of Shuri Castle and has long been a site for prayer. People traveling to mainland Japan often prayed here asking for a safe journey. The temple represents a combination of white walls with a red roof, a typical Japanese architecture.
Image by N on Wikimedia under Creative Commons License.
2

Located within easy reach of Shuri Castle, the Tamaudun Mausoleum was built at the beginning of the 16th century as the shrine for the royal family. The mausoleum was seriously damaged during WWII, but was restored afterward and today it is designated an UNESCO World Heritage Site. The Tamaudun Mausoleum features two main rooms- one on the left, meant for kings and queens and one on the right, meant for princes and princesses. The central hall was used for the going away ceremonies. The shrine applies an admission fee of 300 yen. There is also a museum in the basement of the mausoleum, where you can see photos of the mausoleum before the war. The doors of the Tamaudun Mausoleum are open from 9 am to 6 pm.
Image by 663highland on Wikimedia under Creative Commons License.
3

Shureimon is a gate in the Shuri neighborhood of Naha, the capital of Okinawa Prefecture, Japan. It is the second of Shuri Castle's main gates. It was built in the 16th century. The gate reflects strong Chinese influence, alongside indigenous religious traditions. The four Chinese characters framed on the gate - Shu, rei, no, and kuni, which mean 'Land of Propriety' - were added to the gate long after it was built. The structure of the gate is similar to that of Chinese three-bay turret gates, and is covered with a red tiled hip roof. The 4 pillars stand on foundation stones, and they are supported on front and back by slanting accessory pillars for better stability.

The gate was destroyed during the Second World War and reconstructed through local campaigns and support in the 1950s and 60s. It became the first part of the Shuri Castle to be reconstructed, while decades would follow until the rest of the castle was restored. A picture of the gate appeared on the 2000 yen note issued in 2000 to commemorate the 26th G8 summit held in Okinawa.

Image by 663highland on Wikimedia under Creative Commons License.
Sight description based on wikipedia
4

Sonohyan-utaki is a sacred grove of trees and plants of the traditional indigenous Ryukyuan religion. It is located on the grounds ofShuri Castle in Naha, Okinawa, a few paces away from the Shureimon castle gate. The utaki, or more specifically its stone gate is one of a number of sites which together comprise the UNESCO World Heritage Site officially described as Gusuku Sites and Related Properties of the Kingdom of Ryukyu, and has been designated an Important Cultural Property by the Japanese national government.

While the gates were once opened only for the king, today they are always closed, and so the gates have in a way become a sacred space themselves, representative of the actual sacred space behind them. Many travellers and locals come to pray at the gates.

The stone gate was first built in 1519, during the reign of Ryukyuan king Shō Shin, though the space had been recognized as a sacred utaki prior to that. Whenever the king left the castle on a journey, he would first stop at Sonohyan-utaki to pray for safe travels. The site also played an important role in the initiation of the High Priestess of the native religion.

The gate is said to be a prime example of traditional Okinawan architecture, and shows many signs of Chinese influence, along with a Japanese-influenced gable in the karahafu style. It was severely damaged in the 1945 battle of Okinawa, but was restored in 1957, and officially designated a UNESCO World Heritage Site in 2000, along with a number of other sites acrossOkinawa Island. The utaki, i.e. the sacred grove itself, was once much larger than it is today, an elementary school and other buildings having encroached upon the space.


Image by Taisyo on Wikimedia under Creative Commons License.
Sight description based on wikipedia
5

The Kinjo Dam is a concrete gravity dam on the Li River in Naha, Okinawa Prefecture, Japan. It is designated as a cultural property and is located 500 m south of Shuri Castle. Construction on the dam began in 1989 and it was completed in 2000. Its main purpose is flood control and on average, it can control an intake of 40 m3/s releasing 23 m3/s. The 19 m tall and 120 m long dam was constructed on fragile rock and is set on a deep concrete staircase foundation.
Image by Ray_go on Wikimedia under Creative Commons License.
Sight description based on wikipedia
6

Originally built at the end of the 18th century, the Shikina-en Garden features a fabulous wooden palace with a typical for the region red tile roof and beautiful garden. The premises were originally created as a residence for the Ryukyu kings and are notable for the amazing landscape in Japanese style and unique Okinawan architecture and flora. Shikina-en Garden was destroyed during the Battle of Okinawa in 1945, but was rebuilt to its original after the war. It is included in the list of UNESCO World Heritage Sites.
Image by 663highland on Wikimedia under Creative Commons License.

As the capital of Okinawa Prefecture and the main city on the island of Okinawa, Naha is a city with plenty to offer. This self-guided walking tour will take you to the most important attractions in the city, without which your visit to Naha wouldn't be complete. Sugar-Loaf Hill, Tsuboya Pottery Museum, just to name a few, are must sees while in Naha.