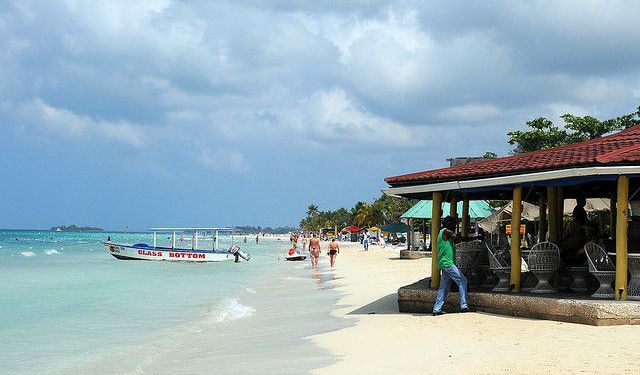 One of Jamaica's popular tourist destinations is the town of Negril, located on the western edge of the island. The city offers a plethora of fun all year long, while its cliffs provide the surreal setting and quiet you may also be searching for. Snorkeling and exploring the crystal waters of the Caribbean by others means are all popular along Negril.
Image Courtesy of Flickr and pshanson.
How it works: Download the app "GPSmyCity: Walks in 1K+ Cities" from iTunes App Store or Google Play to your mobile phone or tablet. The app turns your mobile device into a personal tour guide and its built-in GPS navigation functions guide you from one tour stop to next. The app works offline, so no data plan is needed when traveling abroad.

Negril Lighthouse was built in 1894 1.5 miles (2.4 km) south south east of the westernmost tip of the island by the French company Bubbler & Bernard. It is one of the earliest concrete lighthouses.

Its foundation is a tank 14 feet (4.3 m) deep, which is kept filled with water to keep the 20-metre (66 ft) (27 metres (89 ft) according to Rowlett) reinforced concrete tower balanced and secured in the event of an earthquake. The tower is topped with a lantern and gallery.

An automatic white light 30 m (100 feet) above sea level flashes every two seconds. The light was operated by gas initially, switching to acetylene in 1956 and solar energy in 1985.

The site is a well-known attraction of the Negril area. It is maintained by the Port Authority of Jamaica, an agency of the Ministry of Transport and Works.


Image Courtesy of Flickr and Abeeeer.
Sight description based on Wikipedia.
2

For more than 30 years Rick's Cafe has been a popular nightlife hang-out in the city of Negril. Visitors absolutely love the magnificent views of the Caribbean sunset while dining on the cliffs of the ocean. Live reggae music will enhance the cafe after dark.
Image Courtesy of Flickr and Abeeeer.
3

Another beautiful lighthouse on the shores of Jamaica is the Negril Escape Lighthouse. Settled on the edge of cliffs in the Escape Resort region, the lighthouse is surrounded by a popular hotel. Visitors flock to this lighthouse for fantastic photography and a rare chance to see dolphins in their natural environment.
Image Courtesy of Flickr and alfredmoya.
4

One of the most beautiful buildings on Negril’s “seven-miles beach” is the Blue Cave Castle hotel and resort. The resort was built directly on the cliffs as well as on top of an old pirate cave. The series of stairs make it easy to get from the hotel to the water.
Image Courtesy of Flickr and Chrysaora.
5

Situated on Norman Manley Boulevard, Time Square is a popular attraction due to its beautiful white-column building with a lovely little clock tower on the roof. The luxurious shopping center below is also quite a treat. Time Square Plaza prides itself on high quality liquors, a fine selection of Cuban cigars, as well as attractive jewelry and Jamaican souvenirs.
Image Courtesy of Flickr and Heidi.
6

Whitehall Great House was once an agricultural estate, but was destroyed by a fire in 1985. The countryside attraction is often visited on horseback, as tourists are sure to be rewarded with an old plantation that features stunning views of the coastline.
Image Courtesy of Flickr and pshanson.

Create Your Own Walk in Negril

Creating your own self-guided walk in Negril is easy and fun. Choose the city attractions that you want to see and a walk route map will be created just for you. You can even set your hotel as the start point of the walk.