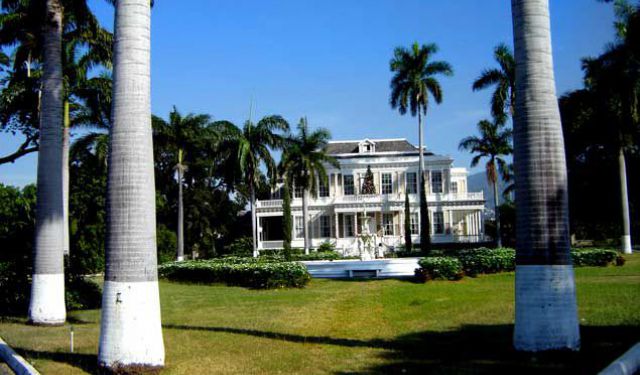 Kingston, Jamaica has the New Kingston area that boasts some tourist attractions. You will see beautiful buildings and parks. There are many specific Jamaican monuments there as well. Take this self-guided tour to explore this new part of the city.
Image Courtesy of Flickr and dubdem sound system.
How it works: Download the app "GPSmyCity: Walks in 1K+ Cities" from iTunes App Store or Google Play to your mobile phone or tablet. The app turns your mobile device into a personal tour guide and its built-in GPS navigation functions guide you from one tour stop to next. The app works offline, so no data plan is needed when traveling abroad.

Trinity Moravian church was established in 1954 as part of the bicentenary celebrations of the Moravian Church in Jamaica. The foundation stone was laid on the 9th of December 1954, and the building was dedicated on the 18th of January 1956. Church members came from all the neighbouring areas so that the congregation provided a meeting point for people from different social and economic groups who might not otherwise have met. While the church was being built, services were held in a nearby home so that when the church was opened, communicant membership was already 61, rising to over 400 by 1966, with large numbers of young people and children in Sunday School and youth organisations.
Image Courtesy of Wikimedia and Fred Linyard.
Sight description based on Wikipedia.
2

St. Andrew Parish Church is a landmark church in this area. It is considered one of the oldest and most beautiful churches in Jamaica. It dates back to 1664 and is an Anglican church. The building that you will see today was built in 1700. It was constructed from red brick and features arched entrances. There are monuments and memorials, and a cemetery near the church with gravestones.
Image Courtesy of Flickr and C. G. P. Grey.
3

There is a tall Clock Tower on an intersection in New Kingston Area. It is called Half Way Tree Clock Tower because it is located in the neighbourhood Half Way tree. This landmark tower stands to mark the old Half Way Tree district. The tower is built in Victorian style and dates back to 1913 when it was constructed by public subscription to commemorate King Edward VII of England.
Image Courtesy of Wikimedia and Raw9345.
4

Devon House is a historical place in New Kingston. The building is very beautiful and is located in a very beautiful park. Devon House is also a Heritage Site and a national monument. It was constructed 127 years ago by Jamaica’s first black millionaire. There is a very famous ice cream shop that sells the most delicious ice cream in the city. Tourists and locals can enjoy recreation, shopping and dining.
Image Courtesy of Flickr and Christina Xu.
5

You will see the statue of Bob Marley, famous Jamaican reggae musician, in New Kingston. Bob Marley Statue is an artistic interpretation of the musician with his guitar, that made him so popular. Marley was probably the most famous person of Jamaican origin. He was the first to represent to the world the indigenous music of that region. Tourists like to take pictures with this statue.
Image Courtesy of Wikimedia and Avda.
6

Independence Park is a large and very popular sports and cultural complex located in the New Kingston area. It was constructed for the 1966 British Empire and Commonwealth Games, and many famous games have since taken place there. You will see statues of famous Olympic sportsmen and winners of gold. At the entrance to the stadium as well as on the site itself, there are some statues of champions.
Image Courtesy of Flickr and Christina Xu.
7

Emancipation Park is a gem in the centre of Kingston. It stands as a symbol of the incredible beauty of Jamaica. You will see beautiful tropical flowers and other plants. There is a wonderful, huge bronze sculpture called "Redemption Song" sculpted by a famous local artist. The statue depicts a naked black man and woman facing each other and looking up to heaven. The Park symbolizes the freedom of this country.
Image Courtesy of Wikimedia and Franz Marzouca.

Kingston Waterfront area coincides with the downtown area and is also the oldest part of the city. There are museums, art galleries, interesting buildings and great monuments. The view of the sea and the port is picturesque. Take this self-guided tour and have a walk along the coastline of Kingston.

Aside from reggae, Jamaica's main attraction, the capital city of Kingston abounds in other attractions of cultural, historical, religious and architectural importance. There are many urban parks with monuments to historic personalities, such as the National Heroes' Park and the St William Grant Park in the heart of downtown, which are often used to accommodate various events on the...  view more