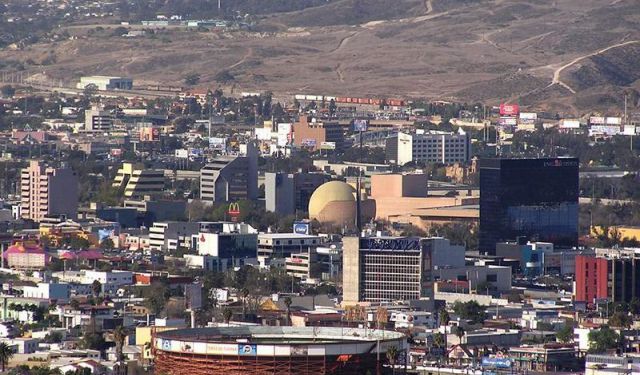 Paseo De Los Heroes Street, located in walking distance from the Mexican and US border, is famous for its numerous statues and monuments honoring distinguished figures and memorable events in Mexican history. Wandering across its palm alleys you can admire a grandiose sculpture or architectural construction on each roundabout of the street. Take this tour to discover the most popular attractions of Tijuana Paseo De Los Heroes.
Image Courtesy of Wikimedia and neonV.
How it works: Download the app "GPSmyCity: Walks in 1K+ Cities" from iTunes App Store or Google Play to your mobile phone or tablet. The app turns your mobile device into a personal tour guide and its built-in GPS navigation functions guide you from one tour stop to next. The app works offline, so no data plan is needed when traveling abroad.

The Tijuana Cultural Center (CECUT) opened its doors October 20, 1982, with over a million visitors a year. This touristic attraction has been the main center for the regional arts, and represents one the most important in the northwest of the country.

The complex features an OMNIMAX theatre, with a 360-degree projector that gives one the impression of being inside the movie. It has a capacity of 308 seats and is popularly known as "La Bola" (the ball) because of its spherical shape.

The center contains a big explanade that can gather up to 6,000 people and is often used for concerts, festivals, performances, and expos of different sorts. It is considered the heart of the centre since it is located exactly at the center.

There is a scenic theatre which has a room for around a thousand visitors and it is mostly used for private concerts and plays. There are also lecture rooms, video room, café, and a bookshop. There are several spaces for temporary small exhibits.


Image Courtesy of Flickr and tj scenes.
Sight description based on Wikipedia.
2

The majestic bronze monument of Cuauhtemoc is located on the second circle of Paseo de los Héroes. Cuauhtemoc, translated as “falling eagle”, was the last Aztec ruler who lived in the first half of the 16th century. He is also known as a brave fighter against Spanish Conquerors. The last Mexican emperor was killed by Hernan Cortes in 1525.
Image Courtesy of Flickr and gabofr.
3

One of the statues in honor of legendary figure Abraham Lincoln was placed in Tijuana, on the third traffic circle of Paseo De Las Heroes. It is known that Mexican president Benito Juárez enjoyed a friendly correspondence with Abraham Lincoln, who was against the Mexican-American War. Abraham Lincoln was the 16th US president. He governed the country during the American Civil War and put an end to slavery. The bronze statue depicts Lincoln breaking chains of slavery.
Image Courtesy of Flickr and tj scenes.
4

Ignacio Zaragoza was a general in the Mexican army, famous for its heroism and victory at the Battle of Puebla in 1862. He was a courageous defender of Mexican people during French invasions. Ignacio Zaragoza died at the age of thirty-three. A bronze monument was installed commemorating his heroic exploits in Mexican history. It was created by Antonio Castellanos Basich and unveiled in 1976. You can see it at the fourth traffic circle coming from the United States.
Image Courtesy of Flickr and Guillermo Buelna.
5

This monument was created in gratitude to Lazaro Cardenas, a Mexican president, for his cordiality towards exiled Spaniards. The creator of the statue is Spanish by origin. Lazaro Cardenas governed the country from 1934 to 1940, and he died at the age of 75. The bronze statue of Lazaro Cardenas was installed at the intersection between Paseo de los Heroes Street and Sanchez Taboada Avenue.
Image Courtesy of Flickr and Sergio J. Palacios.
6

The Minarete is one of the symbols of Tijuana and a popular landmark. This Arabic-Spanish style monument was constructed in 1930. The Minarete is adorned with ornaments from colored tile. The construction does not operate as a religious building but rather it serves an artistic purpose. The outstanding monument is located on Sanchez Taboada Avenue.
Image Courtesy of Wikimedia and Scalif.
7

The first restaurant of this family business opened its doors in 1952. In 2002 the owners decided to create to a new La Especial situated between Agua Caliente and Salinas Boulevards. This is a traditional restaurant with delicious Mexican meals at reasonable prices. At La Especial you will be amazed by the beautiful painted facade, pleasant ambience, friendly staff and superb dishes, beverages and desserts.
Image Courtesy of Flickr and Sergio Jauregui Jauregui.
8

8) Monument to the Free Schoolbook

The Monument to the Free Schoolbook was built in the 1960s on Agua Caliente Boulevard. The idea behind its creation was to promote free education for all Mexicans. The monument has a huge Mexican flag streaming in the wind, a schoolbook and seven children stretching their hands trying to reach it. The children show their enthusiasm for education and the point is to make education affordable for all social layers.
Image Courtesy of Flickr and Sergio Jauregui Jauregui.

Create Your Own Walk in Tijuana

Creating your own self-guided walk in Tijuana is easy and fun. Choose the city attractions that you want to see and a walk route map will be created just for you. You can even set your hotel as the start point of the walk.

Tijuana is the most visited border city in the world, offering something for everybody. It has a lot of interesting attractions to see: monuments and towers, palaces and architectural buildings, museums and art galleries. Those who like shopping will also be satisfied by the variety of markets with Mexican arts and crafts. Take this tour to discover the best spots in Tijuana.