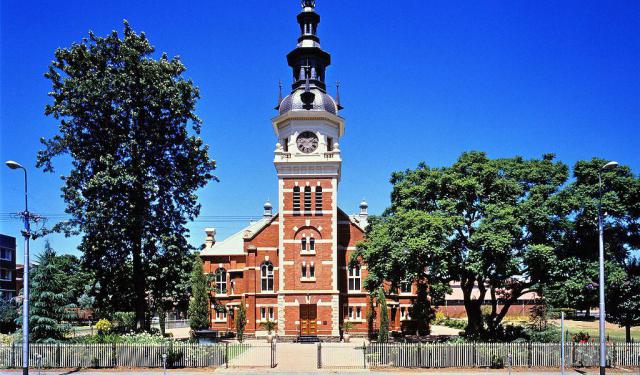 Pretoria, one of South Africa's three capitals (the other two being: Cape Town – legislative, and Bloemfontein – judicial), is commonly regarded as “Jacaranda City” for the abundance of jacaranda trees. The history of Pretoria is rich in events closely associated with the history of the South African Republic, some of which are reflected in a number of local attractions, such as the Union Buildings and the Voortrekker Monument, commemorating early Afrikaans settlers from the Cape Colony. To explore these and other main attractions of Pretoria, follow this orientation walk.
Image Courtesy of Janek Szymanowski.
How it works: Download the app "GPSmyCity: Walks in 1K+ Cities" from iTunes App Store or Google Play to your mobile phone or tablet. The app turns your mobile device into a personal tour guide and its built-in GPS navigation functions guide you from one tour stop to next. The app works offline, so no data plan is needed when traveling abroad.

Church Square is the historic center of the city of Pretoria. It's most prominent feature is the statue of the Boer leader and president of the South African Republic, Paul Kruger. Statues of four anonymous Boer citizen-soldiers surround Kruger's on a lower level of the plinth. Several historically and architecturally significant buildings surround the square: the Palace of Justice, the Old Capitol Theater, the Tudor Chambers, the Ou Raadsaal (Old Council Chamber) and the General Post Office, which was designed by John Cleland.
Image Courtesy of Flickr and The Wandering Angel.
Sight description based on Wikipedia.
2

Kruger House is the historic Pretoria residence of the President of the South African Republic, Paul Kruger (1825-1904). It was built in 1884 by architect Tom Claridge and builder Charles Clark. Milk was used instead of water for mixing the cement from which the house was constructed, as the cement available was of poor quality. The house was one of the first in Pretoria to be lit by electricity. The house contains either the original furnishings or items from the same historical period, some of the many gifts that were presented to Kruger, and other memorabilia. An interesting feature of the house is the pair of stone lions on the veranda that were presented to President Kruger as a birthday gift in 1896 by the mining magnate Barney Barnato. The Kruger House is now a house museum that tries to recreate the ambience of the period in which Kruger lived.
Image Courtesy of Flickr and joonasl.
Sight description based on Wikipedia.
3

The National Cultural History Museum, also known as the "African Window," is located in the Old Mint. It is called the most dynamic museum in the city because of its constantly changing exhibitions. The museum houses a collection of at least five million objects related to the history and culture of South Africa, from the stone age to the present, and from both the indigenous peoples and European colonists.
Image Courtesy of Wikimedia and Borisgorelik.
4

The statue of Chief Tshwane is a 3.6 meter tall bronze monument, created by Angus Taylor and situated in front of Pretoria's City Hall. It is claimed by some that Tshwane led a group of Africans who first settled on the site of the city, before the coming of European settlers, but others question whether such a person ever existed. The larger metropolitan area of which Pretoria is a part has been named Tshwane; it has been proposed to bestow the name on the city itself, but that proposal is a subject of controversy.
Image Courtesy of Flickr and zugaldia.
5

Image Courtesy of Flickr and stuart001uk.
Sight description based on Wikipedia.
6

Melrose House is a stately Victorian mansion that was built in 1886 by the prosperous Pretoria businessman George Jesse Heys. It was named after the famous Melrose Abbey in Scotland. Melrose House gained fame during the Second Boer War (1899–1902), when Lord Roberts requisitioned it as the headquarters for the British forces after Pretoria was captured in June 1900. Today, this elegant house is a museum that represents the transition from Victorian to Edwardian architectural styles and interiors. The interior is characterized by colorful stained glass windows, paintings by English artists, carpets in rich colors, ornate ceilings and fireplaces, and valuable porcelain ornaments. The majority of these items were the property of the Heys family.
Image Courtesy of Wikimedia and Țetcu Mircea Rareș.
Sight description based on Wikipedia.
7

Burgers Park was completed in 1892 and is the oldest park in Pretoria. It was used as a camping area by Voortrekkers (early Dutch settlers) before the city was established. Among the attractions оf this 9.8 acre Victorian-style park are a large fish pond with fountains, a tea garden, a florarium, and a cactus greenhouse. Also there are many trees planted in commemoration of important events.
Image Courtesy of Flickr and mauroguanandi.
8

South African State Theatre is not just a theatre. It is a complex of venues capable of hosting all kinds of artistic and commercial events, from opera, ballet, cabaret, film festivals, and children's theatre to weddings, parties, and product launches. The theatre plays a leading role in developing and training local performing arts groups.
Image Courtesy of Flickr and stuart001uk.
9

The Union Buildings, built from light sandstone, were designed by the architect Sir Herbert Baker in the English monumental style and are 285 m long. They have a semi-circular shape, with the two wings at the sides, this serves to represent the union of a formerly divided people. The clock chimes are identical to those of Big Ben in London.

Image Courtesy of Wikimedia and Davinci77.
Sight description based on Wikipedia.