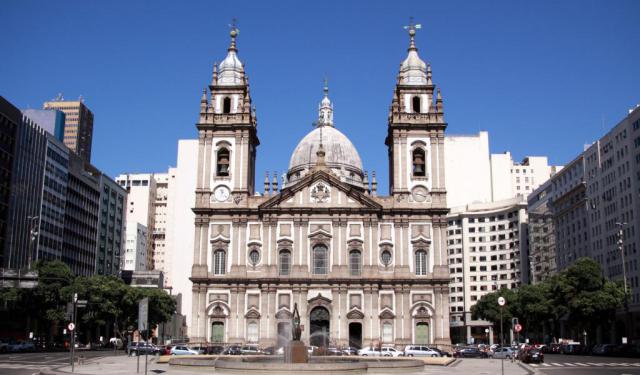 Founded in 1590 by Benedictine monks from Bahia, the Sao Bento Monastery located in the hills of Sao Bento has a simple white exterior reflecting the simplicity of the time, but gives no hint of the opulent Baroque interior. Stepping inside, and seeing the carvings, paintings, statues, and gilding will instantly take your breath away.

The city center houses many other religious landmarks, such as the Candelária Church, whose variety of architectural styles includes Baroque, Neoclassical and neo-Renaissance; the highly artistic Old Cathedral, decorated with statues of saints, paintings, rich stucco and mosaics; or São Francisco da Penitência – another baroque cathedral famous for its carvings, as well as for containing almost a ton of gold.

In a more contemporary architecture, the incredibly striking Metropolitan Cathedral has a conical shape, with 96 meters of internal diameter and capacity to receive up to 20 thousand faithful. Its exterior splendor, with straight and sober lines, is due to the changing stained glass windows carved on the walls up to the dome.

Take our self-guided walking tour to discover the most remarkable cathedrals, churches and monasteries in the city of Rio de Janeiro!
Image Courtesy of Wikimedia and Halley Pacheco de Oliveira.
How it works: Download the app "GPSmyCity: Walks in 1K+ Cities" from iTunes App Store or Google Play to your mobile phone or tablet. The app turns your mobile device into a personal tour guide and its built-in GPS navigation functions guide you from one tour stop to next. The app works offline, so no data plan is needed when traveling abroad.

Mosteiro de São Bento (Monastery of St. Benedict) is officially called the Abbey of Our Lady of Monserrat. This Benedictine abbey's history began in 1590 when the land was donated to the monks. Work began in 1633 and was completed in 1671. An annex was completed in 1755.

The abbey's design is a gorgeous example of Mannerist-style Portuguese colonial architecture. The facade features an edifice with three entrance archways and a triangular gable. Two towers with pyramidal spires surround the entryway. After passing through the archway, visitors will be welcome to a tiled porch with 19th-century iron gates.

The interior is embellished with elaborate gold leaf. Friar Ricardo do Pilar created beautiful hand-painted tiles depicting Benedictine saints between 1676 and 1684. These are on display in the main chapel. In the sacristy, visitors will admire a 1690 masterpiece by painter Friar Ricardo.

The São Bento Church and Monastery has a simple exterior but an absolutely divine gilded baroque interior. Visitors will relish the hundreds of years of Brazillian history and stunning architectural details.

Take part in a traditional Sunday 10:00 am mass--complete with Gregorian chanting and organ music.


Image Courtesy of Wikimedia and Fulviusbsas.
2

In the heart of Rio de Janeiro, in the eponymous district of Santa Rita, stands the modest temple of Santa Rita whose simple white facade and a double-arched bell tower defy the grandeur of the nearby high-rising buildings in a harmonious confrontation between the 18th century Baroque-Rococo style and the boldness of modern architecture. Built in 1722, Santa Rita is one of the oldest churches in Rio. It stands on the land donated by Manuel Nascente Pinto and his wife to the brotherhood of Santa Rita established a year earlier.

Inside the church there is a small atrium under the choir, a marble baptismal font and a small marble sink. To the left from the entrance is an oil painting featuring baptism of Lord Jesus, and to the right - the image of Santa Rita de Cássia herself. The temple houses relics of Santa Rita and Santo Lenho, and is listed by Brazil's Institute of National Historical and Artistic Heritage (IPHAN).
Image Courtesy of Wikimedia and enrique lopez tamayo biosca.
3

The Candelária Church is an important historical Roman Catholic church in the city of Rio de Janeiro. Built and decorated during a long period, from 1775 to the late 19th century, the church combines a Baroque façade with Neoclassical and Neo-Renaissance interior elements.

The quasi-legendary history about the establishment of the church is that in the beginning of the 17th century a ship called Candelária almost sank during a storm on the sea. Upon arriving in Rio de Janeiro, a Portuguese couple sponsored the building of a small chapel, fulfilling the oath they made during the storm. This small chapel, dedicated to Our Lady of Candelária, was built around 1609.

Other elements of interest include: the main altar by Brazilian architect Archimedes Memória; the various German stained-glass windows; the bronze doors (c. 1901) of the main entrance, by Portuguese sculptor António Teixeira Lopes; and the two monumental bronze pulpits in the Art-Nouveau style, by Portuguese sculptor Rodolfo Pinto do Couto (1931).

Tip:
Closed in the afternoon so the best time to visit would be in the morning or early noon.
Due to the great acoustics, attending a concert/ organ recital here comes highly recommended.
Image Courtesy of Wikimedia and Halley Pacheco de Oliveira.
4

Located in the Praça XV square, in downtown Rio, the Old Cathedral of Rio de Janeiro dedicated to Our Lady of Mount Carmel is an old Carmelite church which served as the city's cathedral (Sé) from around 1808 until 1976. During the 19th century, it was also used successively as the Royal and Imperial Chapel by the Portuguese royal family and the Brazilian imperial family, respectively. It is one of the most important historical buildings in the city.

Apart from being of exceptional historical value for the city and the country, this former cathedral has one of the most harmonious interior decorations among the churches in Rio. The walls, chapels and ceiling are covered with ornate Rococo (late Baroque) woodwork showing lightness and unity in style. The decoration was executed after 1785, mainly by one of Rio's best Rococo wood carvers of the period, Inácio Ferreira Pinto, who was also responsible for the main altarpiece. The upper walls of the one-aisled nave have a series of balconies and oval paintings of the Apostles by painter José Leandro de Carvalho. Later reforms did not substantially alter the inner decoration, but the façades were almost completely remodeled in the early 20th century.

Why You Should Visit:
Whilst this church might seem a bit simple from the outside, entry into it reveals a beautifully restored interior.
Decoration includes fine painted ceilings and ornate gilt work balanced by areas of plain white wall.
The overall effect is quite beautifully elegant.

Tip:
There are a number of other things to see in the complex, including an archaeological dig.
Not all of them are open all the time; the most important is the Third Order church immediately adjacent to the Old Cathedral.

The Church of the Third Order of São Francisco da Penitência is a colonial church located next to the Convent of Santo Antônio , on the hill of the same name, in the center of the city of Rio de Janeiro . For its exuberant Baroque decoration , it is considered one of the most important in the city and the country.

This baroque style church was built back in 1726. Besides its great spiritual heritage, it has marvelous ornaments and decorations, such as the jacaranda wood carved altar or the roof panel depicting St Francis receiving the stigmata. With advance booking, you can take a guided tour of the underground passages under the church which were in use up until 1850.

Along with the church of São Francisco da Penitência it is the main showcase of total Baroque art in Rio de Janeiro. Currently the church functions as a Museum of Sacred Art. Don't hesitate to check out the museum for a small fee; the gold room is a spectacle to behold!

Why You Should Visit:
Overwhelming and beautiful, this church wows visitors with its elaborate architecture, magnificent statues, dazzling relics and impressive paintings.
What is more, the church exudes a rather serene feel, making it a perfect stop for anyone who needs a quick break.

The Convent of Santo Antonio is a monastery Catholic belonging to the Franciscan Province of the Immaculate Conception of Brazil located in the top of the Santo Antônio Hill and facing the Largo da Carioca , in the center of the city of Rio de Janeiro. The convent forms, together with the neighboring Church of the Third Order of São Francisco da Penitência , one of the oldest and most important colonial settlements remaining in the city.

The interior of the church is quite simple and traditional, rectangular in shape and with only one nave . The main chapel and side altars have gilded woodwork from the period between 1716 and 1719 , with a late Baroque character , more typical of the 17th century than the 18th century .

The history of the Convent of St. Anthony dates back to 1592, when the first Franciscans arrived at Rio de Janeiro. It is renowned for its catacombs, where the remains of several members of the Imperial Family are interred.