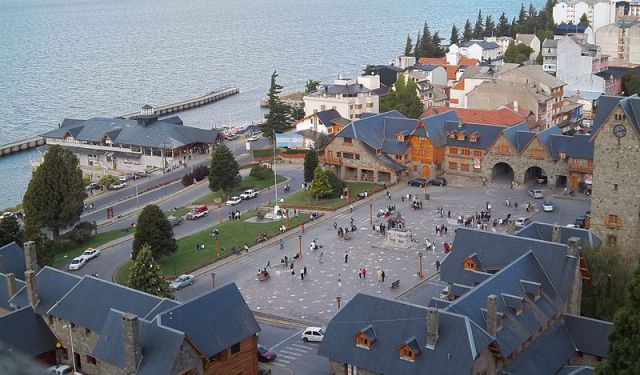 Commonly referred to as Bariloche, San Carlos de Bariloche is a town nestled high in the Andes in the Argentinean region of Patagonia. The town makes mark with its Swiss-style alpine architecture and the vibrant shopping scene of its main artery, Avenida Bartolomé Mitre. If shops, stores, and boutiques selling handmade products sound like your kind of fun, make sure to embark on this orientation walk and explore these and other attractions Bariloche has to offer!
Image Courtesy of Wikimedia and Dario Alpern.
How it works: Download the app "GPSmyCity: Walks in 1K+ Cities" from iTunes App Store or Google Play to your mobile phone or tablet. The app turns your mobile device into a personal tour guide and its built-in GPS navigation functions guide you from one tour stop to next. The app works offline, so no data plan is needed when traveling abroad.

Through Calle Independencia, you will get to the Plaza Principal de la Ciudad, which is the square of the Centro Civico. It is called Plaza Expedicienarios del Desierto. Due to its historical meaning and importance, it has become the top destination in the city. The main buildings of Bariloche are situated here: Policia de la Provincia, Municipalidad, Secretaria de Turismo, Biblioteca Sarmiento, Museo de la Patagonia and Sala de exposiciones Emilio Frey. There are also a couple of interesting wooden sculptures and the monument of the Julio Argentino Roca. The Civic Center is a National Historical Monument which faces the breathtaking Lake Nahuel Huapi.
Image Courtesy of Vance Boyer.
2

The Bariloche Civic Center, including the museum, was declared a National Historic Monument in 1987.

Image Courtesy of Wikimedia and Núria Pueyo.
Sight description based on Wikipedia.
3

At the corner of Avenida San Martin and Calle Independencia is the beautiful Plaza Ciudades Hermanas. The place is also known as Sister Cities Square, the sister being Aspen, Colorado. It is located right behind the Secretaria Municipal de Turismo and the Post Office. There are many trees and flowers planted there. It is a romantic municipal park where lots of inhabitants and residents come to relax and chat.
Image Courtesy of Flickr and Horia Varlan.
4

Salon Cultural de Usos Multiples y Paseo de los Artesanos- Spanish for Multi-use Cultural Hall And Crafts Display Center is an open public space. The building has an interesting shape and was designed by a team of renowned architects, among them Diego Iraola, lbandoz Alicia, Ivan Rivera Indarte and Alfredo Mulet. Here you can admire local arts and crafts. Lots of things are displayed on the walls and stands, some of them even for sale. What is also interesting is that a multitude of handmade items are also exhibited at the SCUM.
Image Courtesy of Flickr and NATALIA PHOTOS.
5

Galeria Premier, situated in the Hotel Premier at Calle Rolando, is a contemporary art gallery. It displays all forms of visual art made by local artists. Among them you will discover Perla Leon, Maria Rosa Lo Schiavo, Marta Di Bitetti, Victoria de la Torre etc. They mostly exhibit paintings, such as oil on wood, acrylic on canvas, sculptures, portraits and unusual art objects.
Image Courtesy of Flickr and oceanaris.
6

Plaza de las Banderas is famous for the Paseo de las Colectividades (Walk of Nations) which is situated here. As you probably know, Patagonia and San Carlos de Bariloche are multinational and culturally diversified. They are two in one, namely a small grassy park with decorative stones and a square, where there are lots of flags, known as Flags square. It represents the nations that immigrated to the city, for example the Austrians. Plaza de las Banderas is often a place for art exhibitions and it is the starting point of the Fiesta de las Colectividades.
Image Courtesy of Flickr and quimpg.
7

If you are in a search of local crafts, than La Candela is the place to be. There is a large diversity of wood carvings on Patagonian cypress or rauli, interesting gifts and souvenirs, ornaments, candles, photo albums and photo frames, dried flowers, embroidered paintings, handmade products and lots of other items. If you want to buy something special as a souvenir, you will surely find it at La Candela.
Image Courtesy of Flickr and ecram1.
8

Plaza Espana is a nice square situated at the crossroads of Calle Ruiz Moreno and Calle Bartolome Mitre. It is mostly crowded with teenagers who ride their skateboards and chat. It is not big but very attractive. Charming benches, trees and flowerbeds, little children playing in the grass, what else do you need for a pleasant walk?
Image Courtesy of Flickr and Robert S. Donovan.
9

Museo Paleontologico was established by the Bariloche Paleontological Association. It is situated at the crossroads of 12 de Octubre and Sarmiento Streets. The aim of this institution is to preserve dinosaur fossils and to find new artifacts in the Bariloche area and the Northwestern Patagonia. A wide range of animal specimens is displayed at the museum, such as: Ichthyosaurus (Jurassic Period), dinosaur egg, the Archaeopterix, a shark (Tertiary), amphibians, flora and fauna from the Patagonian area, etc. Numerous exhibits are open to the public - don't miss them!
Image Courtesy of Wikimedia and Kevin Walsh.
10

Located inside the Asociación Club de Caza y Pesca, Museo Icticola is a world-class museum that exhibits embalmed fish trophies. The pride of the museum is the big brown 16-pound trout; it is 99 cm long and 49 cm wide. The lakes of Bariloche offer a great variety of fish species and hence some interesting expositions.
Image Courtesy of Flickr and nilsrinaldi.