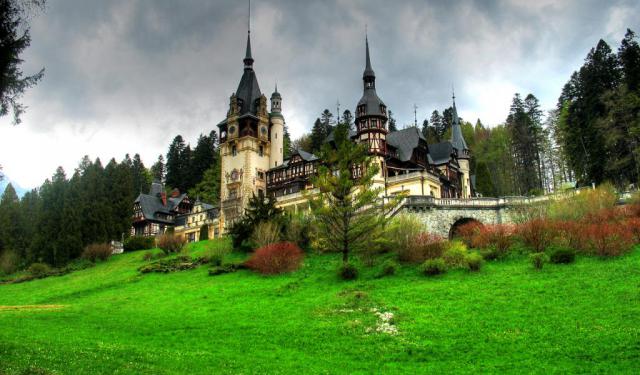 Image by Gabi Jguma on Wikimedia under Creative Commons License.

Sinaia is a wonderful city and resort, located at the base of Bucegi mountain. The city is renowned for its beautiful Romanian architecture which nearly provides as gorgeous a landscape as the backdrop. Here, you will find a vast number of buildings that are known by individuals worldwide, as well as visited by thousands of tourists each year.
How it works: Download the app "GPSmyCity: Walks in 1K+ Cities" from iTunes App Store or Google Play to your mobile phone or tablet. The app turns your mobile device into a personal tour guide and its built-in GPS navigation functions guide you from one tour stop to next. The app works offline, so no data plan is needed when traveling abroad.

Sinaia's town hall was built at the end of the 19th century. Interesting enough, the building features Tudor style architecture, as well as baroque and Roman influences. The building features two main wings with white walls and arched windows painted brown. In front of town hall you will discover a pretty garden.
Image by Luc Saillard on Wikimedia under Creative Commons License.
2

"Unirii" market is the most important agricultural market in Sinaia. Fresh apples, grapes, peaches, potatoes, tomatoes as well as anything else Romania has to offer is located at Unirii. Not only are the prices great, but the vendors are always willing to please the buyers. Cooked meals, including "mici" and "mitiei", as well as fried pork meat are served on occasion.
Image by Julienbzh35 on Wikimedia under Creative Commons License.
3

The Sinaia train station serves the Sinaia mountain resort in Romania. The first station was built in 1913 by the Demeter Cartner Company, and it was reserved exclusively for the Royal Family and its guests at Peleş Castle, generally foreign leaders. On the station platform, there is a memorial plate marking the spot where Prime Minister Ion G. Duca was assassinated by the Iron Guard in 1933.

The newer Royal Train Station is some tens of meters away from the first one, built following the plans of architect Duiliu Marcu in 1939. It is a stone building in Neo-Romanian style, which, at that time, displayed the Hohenzollern coat of arms. The building also featured a depot housing the Royal Train.

In front of the train station there is a large plaza designed with the purpose of holding official welcome ceremonies for various foreign leaders. The main room is decorated with a wall painting (5.50 meters x 5.50 meters) depicting a boar hunt of Wallachian Prince Basarab I (eight life-size characters on horseback, alongside an inscription in Latin reading Basarab Voivode, 14th century).

Image by Andrei Stroe on Wikimedia under Creative Commons License.
Sight description based on wikipedia
4

The Sinaia Casino is located in "Dimitrie Ghica" park and was built at the initiative of King Carol I of Romania. Construction began in 1912 and was finished a year later. The work was supervised by architect Petre Antonescu, who was also the author of the plans. The main shareholder in the casino was Baron of Marçay, a shareholder in the Monte Carlo Casino. The opening was celebrated with fireworks and a piano recital by George Enescu, and it became a major attraction between the wars. After the communist takeover in the 1940s, gambling ceased and the casino is now an international conference center.
Image by Felix on Wikimedia under Creative Commons License.
Sight description based on wikipedia
5

The Sinaia Monastery was founded by Prince Mihail Cantacuzino in 1695 and named after the great Sinai Monastery on Mount Sinai. As of 2005, it is inhabited by 13 Christian Orthodox monks led by hegumen Macarie Bogus.

Prince (Spătarul) Mihail Cantacuzino founded the monastery upon his return from a pilgrimage to Mount Sinai. The first buildings were completed between 1690 to 1695. It was designed to serve as a monastery as well as a fortified stronghold on the route from Brasov to Bucharest.

In the midst of the Russo–Turkish War, 1735–1739, before deserting the monastery, monks hid the valuables by burying them inside a bell. The Ottomans burned the area and broke through the wall in two places.

In 1948, the monastery was put under the patronage of the Archdiocese of Bucharest from the Board of Civil Hospitals. The Romanian Patriarch, Justinian Marina, restored the buildings between the years 1951 and 1957 with money from the Archdiocese. During this period, the whole monastery was fitted with running water, electricity, and natural gas. Thanks to the efforts of King Carol I, the Great Church of the monastery has become the first church to use electric lights in Romania.

Under the leadership of Hegumens Ioasaf and Paisie, construction of The Great Church began in 1842 using funds allocated by the monastery and was completed in 1846. This smaller structure was enlarged by the Board of Civil Hospitals during a period from 1897 to 1903. These efforts gave the building the appearance it has today.

Created by architect George Mandrea, the structure utilizes the Moldavian style and the Brâncovenesc style from Walachia. It is said that the belt of three green enamel lines that encircle the building represent the unity of the Holy Trinity in one God and the unity of the Three Romanian Kingdoms in one country.

The gold mosaic paintings were created by Danish artist Aage Exner in a typical neo-Byzantine style.

The furniture was made of wood by Constantin Babic and his students at the Bucharest Art School (Ṣcoala de Arte si Meserii). The King's throne displays the royal emblem and the motto Nihil sine Deo (Nothing without God). Both thrones are gold-plated.

A remarkable piece adorning the monastery is the epitaphios by Anna Roth, made of silk and gold on a cotton base. It took three years (from 1897 to 1900) to finish.
Image by Aleksander Dragnes on Wikimedia under Creative Commons License.
Sight description based on wikipedia
7

During the leadership of egumen Nifon Popescu (1888-1909). the Bell Tower was added and has since served as a phenomenal monastery. The bell weights 1700 kg. and was brought from the Colţea Tower in Bucharest (or one of the most important bell towers in the capital of Romania). Today, Bell Tower is a prominent monastery, celebration of traditional orthodox holidays as well as other special occasions. Also, the tower features a designated monk that rings the bell everyday for more that 60 years.
Image by Bogdan on Wikimedia under Creative Commons License.
8

At the gates of the monastery, locals have organized a wonderful marketplace. In summer or winter, early morning or very late, Monastery is open and ready to serve your needs. Vendors sell artisan objects, wooden and clay plates, cups with wonderful graffiti, national whistles, costumes and much, much more.
Image by Joe Mabel on Wikimedia under Creative Commons License.
9

"Furnica" is the true expression of Romanian building style, due to the white walls with dark, large windows as well as the unique roof, specific to the mountainous city. The furniture inside is largely hand made, with a lot of wall decorations also made by local artists.
Image by Laurap on Wikimedia under Creative Commons License.
10

Pelişor Castle is part of the same complex as the larger castle of Peleş. It was built in 1899–1903 by order of King Carol I, as the residence for his nephew and heir, the future King Ferdinand (son of Carol's brother Leopold von Hohenzollern) and Ferdinand's consort Queen Marie.

In 2006, it was decided that the palace complex, including Pelisor, long a museum and tourist site, is the legal property of the heirs of the Romanian royal family. They will take legal possession of it and sell it back to the Romanian state, so that it will remain in its current status. The main castle of Peles has already so sold, but negotiations about other villas and chateaus are ongoing. King Michael I of Romania appears decisive that of the complex, Pelisor castle will remain as place for his heirs, the Royal Family.

Pelişor was designed by the Czech architect Karel Liman in the Art Nouveau style; the furniture and the interior decorations were designed mostly by the Viennese Bernhard Ludwig.

16 September - 14 may: Wednesday 11 am - 5 pm; Thursday-Sunday 9 am - 5 pm;
Image by Cristian Bortes on Wikimedia under Creative Commons License.
Sight description based on wikipedia
11

Peleş Castle is a Neo-Renaissance castle in the Carpathian Mountains, on an existing medieval route linking Transylvania and Wallachia, built between 1873 and 1914. Its inauguration was held in 1883.

By form and function, Peleş is a palace, but it is consistently called a castle. Its architectural style is a romantically inspired blend Neo-Renaissance and Gothic Revival similar to Schloss Neuschwanstein in Bavaria. A Saxon influence can be observed in the interior courtyard facades, which have allegorical hand-painted murals and ornate fachwerk similar to that seen in northern European alpine architecture. Interior decoration is mostly Baroque influenced, with heavy carved woods and exquisite fabrics.

The collection of arms and armor has over 4,000 pieces.

Peleş Castle has a 3,200-square-metre (34,000 sq ft) floor plan with over 170 rooms, many with dedicated themes from world cultures (in a similar fashion as other Romanian palaces, like Cotroceni Palace). The establishment hosts one of the finest collections of art in Eastern and Central Europe, consisting of statues, paintings, furniture, arms and armor, gold, silver, stained glass, ivory, fine china, tapestries, and rugs. Perhaps the most acclaimed items are the hand-painted stained glass vitralios, which are mostly Swiss. Peleş Castle shelters a painting collection of almost 2,000 pieces.

Thursday – Sunday: 9 am – 5 pm
Image by Adam Jones on Wikimedia under Creative Commons License.
Sight description based on wikipedia
12

Create Your Own Walk in Sinaia

Creating your own self-guided walk in Sinaia is easy and fun. Choose the city attractions that you want to see and a walk route map will be created just for you. You can even set your hotel as the start point of the walk.

Romania is largely an orthodox country and is thus appropriately structured. Here you will discover several beautiful, mysterious, notable and unique churches as well as worship venues. Also, you will gain an appreciation for orthodox style, architecture, mural paintings and bas-reliefs traditions. Take a journey to Sinaia's religious institutions today!

The mountain city of Sinaia brings the unique experience of handcraft shopping to the mainstream. This special shopping experience will allow you to see how Romanian people produce all kinds of household objects, clothes, souvenirs and jewelry. Besides, not only are the products special, but the open air markets refreshing and pleasant.

Sleep is overrated and ultimately you should take...  view more