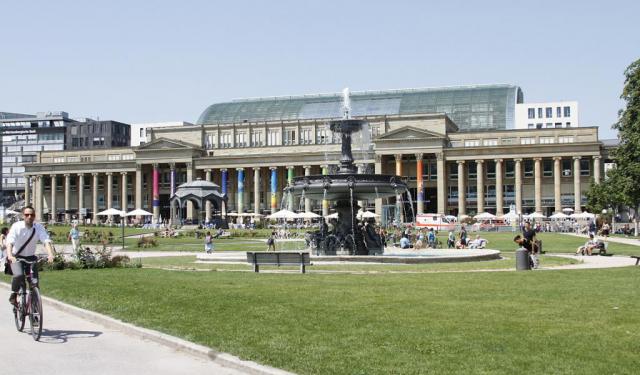 Image by BuzzWoof on Wikimedia under Creative Commons License.

Stuttgart is a modern city with rich historic past and a wealth of sightseeing. Here, alongside contemporary, glass-clad buildings there are numerous centuries-old monuments and historic sights coexisting in harmony. Follow this orientation walk to discover the most popular attractions of Stuttgart.
How it works: Download the app "GPSmyCity: Walks in 1K+ Cities" from iTunes App Store or Google Play to your mobile phone or tablet. The app turns your mobile device into a personal tour guide and its built-in GPS navigation functions guide you from one tour stop to next. The app works offline, so no data plan is needed when traveling abroad.

Schlossplatz is the largest square in the centre of the city of Stuttgart and home to the New Castle which was built between 1746 and 1807. The entire square was last fully renovated in 1977 to mark the staging of the Bundesgartenschau (State Garden Show) in Stuttgart. The lawns and flowerbeds were renewed in 2006 following the staging of the 2006 World Cup Finals.

Every year Schlossplatz is home to major outdoor events such as open air concerts, children's fairs and parts of the Christmas market including an outdoor ice rink. During the 2006 World Cup Finals the square regularly held more than 40,000 spectators who watched live matches on 3 huge screens.

Schlossplatz featured the United Buddy Bears exhibition in summer 2008 - an array of 144 two metre-high sculptures, each designed by a different artist, touring the world as a symbol of cultural understanding, tolerance and mutual trust.

Image by Enslin on Wikimedia under Creative Commons License.
Sight description based on wikipedia
2

The New Castle is a building which stands on the south edge of Schlossplatz, the central square in Stuttgart, Germany. The castle is built in late Baroque style. From 1746 to 1797 and from 1805 to 1807, it served as a residence of the kings of Württemberg. The castle, which is more of a palace, stands adjacent to the Old Castle. The castle was almost completely destroyed by Allied bombing during the Second World War and was reconstructed between 1958 and 1964. During this time, most of the inside of the castle was also restored and the building was used by the Baden-Württemberg State Parliament. Today it is used by the State Ministries of Finance and Education.
Image by Mussklprozz on Wikimedia under Creative Commons License.
Sight description based on wikipedia
3

Kaiser Wilhelm I Statue is situated in the centre of Karlsplatz – a lovely square surrounded by trees and located near the Schlossplatz. The monument contains the statue of Emperor Wilhelm I on a horse and two guarding lions on both sides. At the back of the statue, there are two obelisks which record the major battles and other events of the Franco-Prussian War. Kaiser Wilhelm I Statue stands here to celebrate the German victory over France in the war of 1870-1871.
Image by Peter Radunzel on Flickr under Creative Commons License.
4

The Old Castle is located in the centre of Stuttgart, the capital of the German State of Baden-Württemberg. It dates back to the 10th century. The first castle dates back to around 950 when Stuttgart was a settlement for breeding horses. In the 14th century it became the residence of the sovereign Counts of Württemberg. In the 16th century dukes Christopher and Ludwig ordered it to be converted into a Renaissance castle. Moats around the castle were removed in the 18th century. In 1931 the castle was severely damaged by a fire and before it could be reconstructed, it was damaged by bombing in the Second World War. The castle was finally renovated in 1969. Today the Old Castle is home to the Württemberg State Museum. King Charles I of Württemberg and his wife Olga are buried beneath the castle church. The inner courtyard houses a monument to Eberhard I.
Image by BuzzWoof on Wikimedia under Creative Commons License.
Sight description based on wikipedia
5

Located in the centre of lovely Schillerplatz square, the Schiller memorial was built in the middle of 19th century by the Danish sculptor in honour of the well-known German philosopher, poet, historian and playwright Friedrich Schiller. This is the first monument to Schiller to be built in Germany. Interestingly, the audience of the Arte channel named this great man the second best dramatist in Europe, after Shakespeare. Check out this monument and beautiful historical buildings surrounding it.
Image by Enslin on Wikimedia under Creative Commons License.
6

Königstrasse is a one-mile long central business and shopping street in Stuttgart. Many fascinating things can be seen along this street: fashion department stores, souvenir shops, chill out areas, lovely café shops and a restaurant. Here you can also enjoy street performances and concerts by artists from around the world. Check out the most colorful and vibrant streets of Stuttgart.
Image by Alexander Calder on Wikimedia under Creative Commons License.
7

The Kunstmuseum Stuttgart is a recently opened art museum in Stuttgart, Germany.The cubic museum building with 5000 m² of display space was designed by Berlin architects Hascher and Jehle. During the day it looks like a glass cube, and at night the interior lit limestone walls become visible. The museum's collection comes from the previous "Galerie der Stadt Stuttgart". The city's collection goes back to a gift from the Marchese Silvio della Valle di Casanova in 1924. It contains one of the most important collections of the work of Otto Dix and also works from Willi Baumeister, Adolf Hölzel, Dieter Roth and others.

Operation hours: Tuesday - Sunday: 10 am – 6 pm; Friday: 10 am – 9 pm
Image by healthserviceglasses on Flickr under Creative Commons License.
Sight description based on wikipedia
8

Stuttgart State Opera is a large theatre complex and one of the leading Opera Houses in Europe. The performances of the State Opera including ballet, opera, Western classical music and drama, will amaze you with its quality and touch your senses. Visit this premier venue for exclusive, cultural, classical entertainment.
Image by Andreas Praefcke on Wikimedia under Creative Commons License.
9

The Staatstheater Stuttgart is an opera house in Stuttgart, Germany. It is also known locally as the Grosses Haus, having been the larger of two theatres in the former Königliche Hoftheater. Designed by the noted Munich architect, Max Littmann, who won a competition to create new royal theatres, it was constructed between 1909 and 1912 as the Königliche Hoftheater, a royal theatre of the Kingdom of Württemberg with a Grosses Haus and a Kleines Haus. In 1919, the theatres were renamed the Landestheater, and later, the Staatstheater. The Small House was destroyed by bombing during the Second World War and today, the site is occupied by a new Kleines Haus, which opened in 1962.
Image by Andreas Praefcke on Wikimedia under Creative Commons License.
Sight description based on wikipedia
10

Carl Zeiss Planetarium is a popular attraction, not just because of the great opportunity to view the stellar constellations in a fascinating environment, but also for its unique architectural construction - it is made from a glass pyramid design. Don’t miss the chance to spend a great time in the beautiful Schlossgarten surrounding the Planetarium – a truly wonderful park containing lovely contemporary design fountains, flower decorations and a beer garden.
Image by Martin-D1 on Wikimedia under Creative Commons License.
11

Stuttgart Central Station is a railway in the city of Stuttgart. It is the largest regional and long-distance railway station in Stuttgart, the main node of the Stuttgart S-Bahn network, and, together with the halt at Charlottenplatz, the main node of the Stuttgart Stadtbahn. Located at the northeastern end of the Königstraße, the main pedestrian zone of the city centre, the main line station is a terminus, whilst the subterranean S-Bahn and Stadtbahn stations are through stations. The station is well known for its 12-storey tower with a large, rotating and illuminated Mercedes-Benz star insignia on top.

Plans for the controversial Stuttgart 21 project to convert the main line terminus station into an underground through station include the demolition of the side wings of the building, together with the elimination of the platforms, tracks, and apron of the terminus station. The planned underground through station is configured at a 90 degree angle to the present station. Construction is scheduled from 2010 to 2019.

In November 2009, preservationists of the International Council on Monuments and Sites nominated the building for inclusion in UNESCO’s World Cultural Heritage list, an occasion that opponents of the Stuttgart 21 project picked to urge the city and Deutsche Bahn to stop the project which implies demolition of parts of the complex designed by Paul Bonatz.

Oberer Schloßgarten is a beautiful green park, situated between the State Opera and New Castle. The atmosphere here will always put visitors in a relaxed mood, thanks to its lovely green area with beautiful floral arrangements and little fountains. During the year, the park houses different types of traditional festivals and markets. Grab some delicious German food and come here for a great picnic or take a break from the busy streets of Stuttgart.
Image by alexeya on Flickr under Creative Commons License.