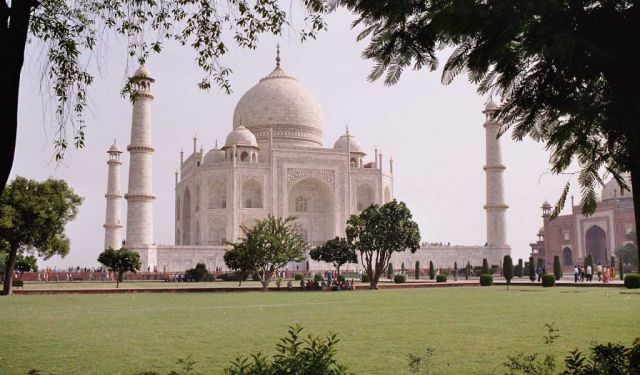 Agra is most known for containing one of the seven wonders of the modern world - the Taj Mahal. This finest example of Mughal architecture attracts thousands of tourists and visitors, who admire its magnificence and beauty. Take the following tour to see the marvelous attractions in the Taj area!
Image Courtesy of Wikimedia and Núria Pueyo.
How it works: Download the app "GPSmyCity: Walks in 1K+ Cities" from iTunes App Store or Google Play to your mobile phone or tablet. The app turns your mobile device into a personal tour guide and its built-in GPS navigation functions guide you from one tour stop to next. The app works offline, so no data plan is needed when traveling abroad.

The Great gate is the main gateway (darwaza) to the Taj Mahal Complex and represents a gorgeous monumental structure of early Mughal architecture. Originally built of marble, the gate features vaulted ceilings and walls in geometric designs, decorations with floral motifs, and wonderful archways, which mirror the shape of the tomb's archways. The calligraphy on the Great Gate reads "O Soul, thou art at rest. Return to the Lord at peace with Him, and He at peace with you."
Image Courtesy of Wikimedia and Varun Shiv Kapur.
Sight description based on Wikipedia.
2

Museum Taj Mahal is also known as Jal Mahal and is situated within the Taj Mahal complex. Established in 1982, the museum features a main hall and three galleries, which display a variety of exhibits related to the construction of the Taj Mahal, including antiquities, Mughal miniature paintings, manuscripts, royal documents, examples of calligraphy, jade and porcelain objects, plans and drawings of the Taj Complex.
Image Courtesy of Flickr and Dainis Matisons.
3

The Taj Mahal Mosque is located on the western side of the magnificent Taj Mahal. The mosque is made of beautiful red sandstone and consists of four fine octagonal towers and three graceful domes. Its ceilings and walls are beautifully decorated with wonderful calligraphy, inscriptions of passages from the Muslim Holy Scriptures, and the name of Allah.
Image Courtesy of Wikimedia and Dcastor.
4

The Taj Mahal is a white marble mausoleum built by Mughal emperor Shah Jahan in memory of his third wife, Mumtaz Mahal. It is widely recognized as "the jewel of Muslim art in India and one of the universally admired masterpieces of the world's heritage." Construction of the Taj Mahal began in 1632. The principal mausoleum was completed in 1648 and the surrounding buildings and garden were finished five years later.

Taj Mahal is the finest example of Mughal architecture, a style that combines elements from Persian, Turkish and Indian architectural styles. In 1983, the Taj Mahal became a UNESCO World Heritage Site. The tomb is the central focus of the entire Taj Mahal complex. This large, white marble structure stands on a square plinth and consists of a symmetrical building with an iwan topped by a large dome and finial.

The Taj Mahal was constructed using materials from all over India and Asia and over 1,000 elephants were used to transport building materials. It attracts between 2 million and 4 million visitors annually, including more than 200,000 from overseas.

Why You Should Visit:
Definitely a place that has to be seen to be believed with all kind of interesting stories/features and many brilliant spots (other than the obvious) to take great photos from.
The terraces around the central building are lovely to wander around and seeing the crystalline marble walls up close.

Tip:
The temperature in summer is above 40 Celsius so take all precautions, sunblock, and comfortable clothes.
Take only a small rucksack or a bag, as bulky rucksacks are not allowed. Don't take any kind of batteries, chargers, tripod, or food.
There's a lot to see and you'll get wrapped up in listening to a lot of the history, so make sure you allocate at least half a day.
You can skip the waiting lines by getting one government guide to show you inside.
In the evening, go to the other side of the river and enjoy the sunset.


Image Courtesy of Wikimedia and Thuresson.
Sight description based on Wikipedia.
5

Jawab is another red sandstone building, located on the the eastern side of the glorious Taj Mahal. It was built with the purpose of counterbalancing the mosque and maintaining the symmetry of the design of the Taj Mahal Complex. Jawab is decorated with beautiful flower designs and is used as a guesthouse.
Image Courtesy of Flickr and Carlton Browne.

Agra, the former capital of India under the powerful Mughal emperors, today is perhaps India's most popular tourist destination, in large part due to the magnificent Taj Mahal located here. Still, other than the iconic mausoleum, Agra is renowned for its colossal historic heritage manifested in numerous sites. To find out what else the city has to offer, take this orientation walk!