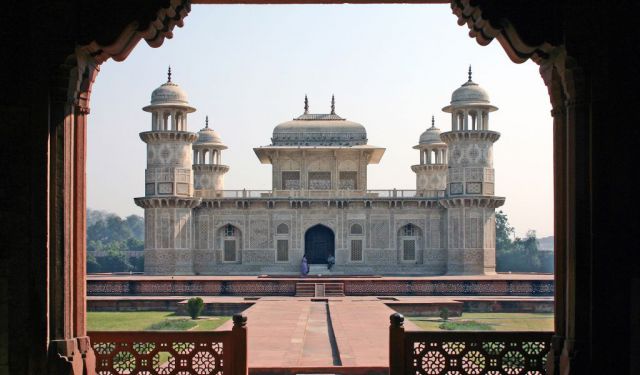 Image by Flicka on Wikimedia under Creative Commons License.

Agra, the former capital of India under the powerful Mughal emperors, today is perhaps India's most popular tourist destination, in large part due to the magnificent Taj Mahal located here. Still, other than the iconic mausoleum, Agra is renowned for its colossal historic heritage manifested in numerous sites. To find out what else the city has to offer, take this orientation walk!
How it works: Download the app "GPSmyCity: Walks in 1K+ Cities" from iTunes App Store or Google Play to your mobile phone or tablet. The app turns your mobile device into a personal tour guide and its built-in GPS navigation functions guide you from one tour stop to next. The app works offline, so no data plan is needed when traveling abroad.

The Ram Bagh is the oldest Mughal Garden in India, originally built by the Mughal Emperor Babur in 1528, located about five kilometers northeast of the Taj Mahal in Agra. The garden is a Persian garden, where pathways and canals divide the garden to represent the Islamic ideal of paradise, an abundant garden through which rivers flow. The garden has numerous water courses and fountains. The name is a corruption of the Persian Aaram Bagh meaning 'Garden of Rest'. It is also variously known as Bagh-i Nur Afshan 'Light-Scattering Garden', Aalsi Bagh or 'Lazy Garden': according to legend, Emperor Akbar proposed to his third wife, who was a gardner there, by lying idle for 6 days until she agreed to marry him. The preserved, surviving architecture dates to Jahangir's reign and demonstrates the skill of his wife Nur Jahan as a garden designer.

Opening hours: from sunrise to sunset.

Image by varunshiv on Flickr under Creative Commons License.
Sight description based on wikipedia
2

Chini ka Rauza is a funerary monument containing the tomb of Allama Afzal Khan Mullah, a scholar and poet who was the Prime Minister of the Mughal Emperor Shah Jahan. The tomb was built in 1635. This outstanding mausoleum features eight beautifully indented arches in the octagonal chamber, wonderful multicolored glazed tiles, beautiful decoration, and a great Afghan-style bulbous dome.

Chini ka Rauza is considered a milestone in Indo-Persian architecture, as it is the very first building in India that has been exclusively decorated by the glazed tile works. The most distinctive feature of the tomb is the colorful tiles or chini, from which the mausoleum gets its name. The tomb is rectangular in shape and is constructed mainly of brown stone. The walls of the tomb are adorned with inscriptions and colored tiles that give the structure a distinctive look.

Why You Should Visit:
The art form using glazed tiles in decorating this place is something rare to find and is really beautiful.
Poorly maintained but open 24 hours a day and one can enter freely (or simply tip the guard).
Very close to Itimâd-ud-Daula (Baby Taj), and the Yamuna River behind it provides a great backdrop.


Image by Varun Shiv Kapur on Wikimedia under Creative Commons License.
Sight description based on wikipedia
3

3) Tomb of Itimâd-ud-Daulâ (must see)

Itimâd-ud-Daulâ's Tomb is a Mughal mausoleum, often described as 'jewel box', sometimes called the 'Baby Tāj', and often regarded as a draft of the Tāj Mahal. Along with the main building, the structure consists of numerous outbuildings and gardens. The tomb, built between 1622 and 1628, represents a transition between the first phase of monumental Mughal architecture – primarily built from red sandstone with marble decorations to its second phase, based on white marble and pietra dura inlay.

The mausoleum is set in a large cruciform garden criss-crossed by water courses and walkways and covers about 23 square meters. On each corner it has hexagonal towers, about 13m tall. The walls are white marble from Rajasthan encrusted with semi-precious stone decorations – carnelian, jasper, lapis lazuli, onyx, and topaz formed into images of cypress trees and wine bottles, or more elaborate decorations like cut fruit or vases containing bouquets.

Why You Should Visit:
Great place to relax for hours, if only you take off your shoes, lie down in the grass and enjoy its peacefulness and cleanliness.
The structure itself is smaller compared to the Taj but so much more detailed and just physically beautiful.

Tip:
Visit on sunset to see the tomb change its color into pink :)
To go inside you have to remove your shoes (and should tip the man guarding them when you're done).

Kinari Bazaar is one of the most popular city markets, located to the northwest of Agra Fort. This highly reputed market of Agra is the perfect place to find things for wedding ceremonies, including gorgeous bridal jewelry, wonderfully crafted gold and silver garlands, clothes for wedding ceremonies and other beautiful wedding accessories, no matter the religion.

Tip:
Consider hiring a guide who knows all the top quality crafts and if you do, make sure to ask about the leather outlet outside Kinari.
Image by Appaiah on Wikimedia under Creative Commons License.
5

Jama Masjid in Agra is opposite the Agra Fort and overlooking the Agra Fort Railway Station. The Jama Masjid is also popularly known as the Jami Masjid or "Friday Mosque" and is one of the largest mosques in India. The Mosque was built by Shah Jahan in 1648 and dedicated to his favorite daughter, Jahanara Begum.

Jama is a very simple mosque of red sandstone with little white marble decoration and blue color paint wall and ceilings and is surrounded by a great bazaar. Still in use today, the mosque is one of the city's main landmarks and serves as a useful reference point when exploring the crowded bazaars that sprawl from its base. It is beautifully decorated with paintings, inlaid stones, carvings and glazed tiles.

Why You Should Visit:
The design is quite unique with a fountain at the center and supported by four kiosks in the courtyard.
It has no praying room inside – everything is outside between the beautiful walls and domes.

Tip:
The views out over the old city from the minaret are fantastic, though bear in mind that the whole thing closes to non-Muslims at mid-day for prayers.
To take pictures and video you have to pay. Needless to say, you have to take off your shoes.

Opening Hours:
Daily, from sunrise to sunset
Image by sayamindu on Flickr under Creative Commons License.
Sight description based on wikipedia
6

Agra Fort is a UNESCO World Heritage site located in Agra about 2.5 km northwest of its more famous sister monument, the Taj Mahal. The fort can be more accurately described as a walled city. The 94-acre (380,000 m2) fort has a semicircular plan, its chord lies parallel to the river and its walls are seventy feet high. Double ramparts have massive circular bastions at intervals, with battlements, embrasures, machicolations and string courses. Four gates were provided on its four sides, one Khizri gate opening on to the river. Two of the fort's gates are notable: the "Delhi Gate" and the "Lahore Gate", also known as the "Amar Singh Gate". Because the Indian military (the Parachute Brigade in particular) is still using the northern portion of the Agra Fort, the Delhi Gate cannot be used by the public. Tourists enter via the Amar Singh Gate.

Under Akbar's reign, 1,444,000 builders worked on the fort for eight years, completing it in 1573. The site is very important in terms of architectural history, as some of the most historically interesting mixings of Hindu and Islamic architecture are found here. Agra Fort is one of five wonders for the Indian civilization.

Why You Should Visit:
If you are visiting Taj Mahal, a visit to Agra Fort is complimentary. What a place! It makes Windsor Castle look small.
It's also nowhere near as busy as the Taj and there's more shade so much more pleasant to explore.

Tip:
Take a good guide (the ones inside the fort are nicer/cheaper), and take your time to see and understand in deep all you can get from it.
There's lots of walking, however, so bring good walking shoes, hat, drinking water, and a camera.
Consider going early to avoid most of the crowds.

Agra is most known for containing one of the seven wonders of the modern world - the Taj Mahal. This finest example of Mughal architecture attracts thousands of tourists and visitors, who admire its magnificence and beauty. Take the following tour to see the marvelous attractions in the Taj area!