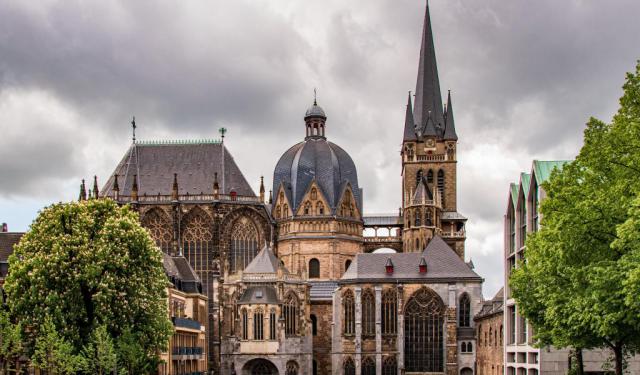 Image by Euku on Wikimedia under Creative Commons License.

Aachen is an old historic city where you will find a wide number of old churches. Dating back from Medieval times to the 20th century, these sacred places are valuable from historical, architectural and cultural points of view. This self-guided tour will lead you through the most prominent religious sights in the city.
How it works: Download the app "GPSmyCity: Walks in 1K+ Cities" from iTunes App Store or Google Play to your mobile phone or tablet. The app turns your mobile device into a personal tour guide and its built-in GPS navigation functions guide you from one tour stop to next. The app works offline, so no data plan is needed when traveling abroad.

St. Adalbert’s Church is located on Kaiserplatz, which stands on a big rock near an old Roman road. It is one of the oldest churches in Aachen and it is a Catholic church, dedicated to St. Adalbert, the “apostle of eastern Europe”. The original building was founded by emperor Otto III in Medieval times. The consecration of the church took place in 1005. After its near-total demolition during World War II, the church was re-established and renovated inside and out.
Image by Túrelio on Wikimedia under Creative Commons License.
2

St. Peter’s Church is situated on Peterskirchhof and is one of the oldest churches in Aachen. Dedicated to St. Peter, the church was built on a former Roman burial site and was first heard of in 1215. The present Baroque-style brick structure dates back to 1717. Presumably its bell tower was part of the Medieval city walls. The church houses an old altar with Baroque carvings, the copy of the Pietà from the 15th century, Anthony's sculpture created by sculptor Gustav Angelo Venth, 19th century icons and liturgical vessels from the Baroque period.
Image by Euku on Wikimedia under Creative Commons License.
3

St. Theresa's Church is located in the northeastern area of the city centre. The church is dedicated to Saint Teresa of Avila and was built between 1739 and 1745 by Laurenz Mefferdatis. The Baroque architect Johann Joseph Couven was responsible for the design of the interior. This brick building has a Neoclassical shape, a three-axis with pilasters, arched windows, oak altar and rococo carvings. It was rebuilt after the damage of the Second World War. Today the church is used by the Romanian Orthodox Church "Holy Trinity".
Image by Euku on Wikimedia under Creative Commons License.
4

St. Paul’s Church is situated in the centre of the city, on Trichtergasse. It was built in 1400 as a Dominican church. The present church--built in 1955 after the destruction in World War Two--houses Gothic windows, a large Renaissance portal from 1705 at the entrance, and a monument of Franziska Schervier in the yard.
Image by Kyrillos2 on Wikimedia under Creative Commons License.
5

St. Anna’s Church is a Protestant church built in 1802 and located on Annastraße. It represents the former Benedictine monastery church in Aachen, founded in 1511. The church was consecrated in 1532. Over 200 years later, most of the church was rebuilt by architect Johann Joseph Couven. The consecration of this church took place in 1749. After destruction in the Second World War, the building was reconstructed in 1950-1951. The interior is mainly from the postwar period. The adjacent rectory now is home to a community centre.
Image by Norbert Schnitzler on Wikimedia under Creative Commons License.
6

The Greek Orthodox Church is another religious sight in Aachen, situated on Jesuitenstraße in the centre of Aachen. This religious building is a Greek orthodox church, dedicated to Saint Michael and Saint Dimitrios. Right above the entrance you can see a fine sculpture of Saint Michael. The Jesuitenstrasse (Jesuits road) already existed in Roman times and was the Via Principalis - a military camp. In 1579 two Jesuits came to Aachen, however they left the city in 1581. In 1600 the council of the town took the decision to recruit and settle Jesuits in Aachen. In 1618, on May 28th was held the ground-breaking ceremony and in 1928 the church was completed. With the dissolution of the Jesuit Order in September 1773 the church was closed and converted into a granary during the French period, later it was used as a parish church. In 1987 the Greek Orthodox community of St. Dimitrios purchased the building.
Image by Norbert Schnitzler on Wikimedia under Creative Commons License.
Sight description based on wikipedia
7

St. Foillan’s Church is situated right in the heart of Aachen, in the pedestrian zone, and is only separated by a narrow street from the cathedral. This religious building was founded in 1180 and is one of the oldest parish churches in the city. Inside you will see the altar from 1962, a large bronze cross with enamel coating, which also dates from 1962, numerous paintings, a late Gothic sculpture of Madonna, a wooden statue from the 16th century and other relics. The church was renovated between 1883 and 1888.
Image by BBKurt on Wikimedia under Creative Commons License.
8

St. Mary's Church is located on Wallstraße and is a Catholic church, the newest one in the centre of Aachen. It was constructed between the years 1858 and 1886 according to plans by Vinzenz Statz. After the Second World War the church was rebuilt by architect Karl-Otto Lüfkens. This red brick building houses a minaret tower built in Neo-Gothic style and has an octagonal floor plan.
Image by Norbert Schnitzler on Wikimedia under Creative Commons License.