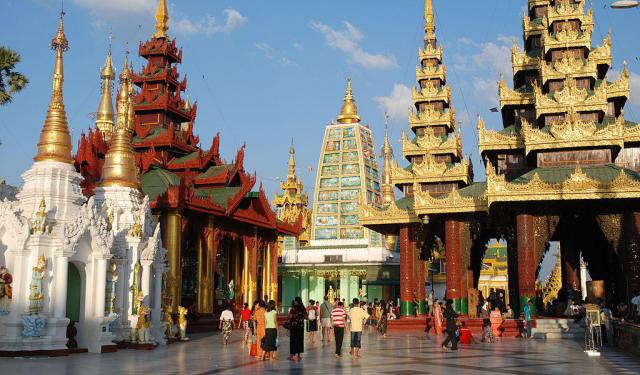 Yangon has a number of religious places that are a must see for each visitor that comes to Myanmar. There is a mix of religions in this city, which is why you can see different sacred places from pagodas (characteristic of Myanmar) to Baptist churches that were founded many decades ago, with the arrival of the missioners. Take this religious tour to visit the sacred places of Yangon.
Image Courtesy of Wikimedia and Thomas Schoch.
How it works: Download the app "GPSmyCity: Walks in 1K+ Cities" from iTunes App Store or Google Play to your mobile phone or tablet. The app turns your mobile device into a personal tour guide and its built-in GPS navigation functions guide you from one tour stop to next. The app works offline, so no data plan is needed when traveling abroad.

Shwe Phone Pwint is located on Yay Gyaw Road in downtown Yangon. The pagoda has a spectacular design and an outstanding architecture. Like other Buddhist temples, it is very old, dating back to ancient times. The surface of the stupa is covered with gold, and it is an important place of worship for the locals.
Image Courtesy of Flickr and Wunna Phyoe.
2

Saint Mary's Cathedral is a Catholic cathedral located on Bo Aung Kyaw Street in Botahtaung Township, Yangon, Burma. The cathedral's exterior, of red brick, consists of spires and a bell tower. It was designed by Dutch architect Jos Cuypers, son of Pierre Cuypers.

The cathedral is the largest in Burma. Construction began in 1895 and was completed 19 November 1899 under a land grant from the Government of India, whilst Lower Burma was a province of British India. During the 1930 Yangon earthquake, St. Mary's Cathedral suffered little damage and it withstood the Japanese invasion during World War II. However, the cathedral's stained glass windows were damaged during the Allied invasion of Yangon. Located on the grounds of the cathedral is Basic Education High School No. 6, which is locally known as "Saint Paul's High School", although it has no religious affiliation to the Catholic Church today. The cathedral is listed on the Yangon City Heritage List.

Image Courtesy of Flickr and Eustaquio Santimano.
Sight description based on Wikipedia.
3

Emmanuel Baptist Church was founded in 1885 by an American missionary. The church is located on Maha Bandoola Road opposite Town Hall. It is one of the oldest Baptist churches in Yangon. The church boasts an interesting and impressive architecture.
Image Courtesy of Wikimedia and khaipi.
4

Bengali Sunni Jameh Mosque is situated in downtown Yangon. Its design features an Islamic temple, whose facade is beautifully ornamented with pieces of architecture. It has a spectacular dome and minarets. The mosque was erected by a Muslim Indian population during the British colonial era.
Image Courtesy of Wikimedia and Hintha.
5

The Sule Pagoda is a Burmese stupa located in the heart of downtown Yangon, occupying the centre of the city and an important space in contemporary Burmese politics, ideology and geography. According to legend, it was built before the Shwe Dagon pagoda during the time of the Buddha, making it more than 2,500 years old. Burmese legend states that the site for the Shwe Dagon pagoda was asked to be revealed from an old nat who resided at the place where the Sule Pagoda now stands.

The Sule Pagoda incorporated the original Indian structure of the stupa, which initially was used to replicate the form and function of a relic mound. However, as Burmese culture became more independent of its South Indian influences, local architectural forms began to change the shape of the pagoda. It is believe to enshrine a hair of the Buddha that the Buddha himself is said to have given to the two Burmese merchant brothers, Tapissa and Balika. The dome structure, topped with a golden spire, extends into the skyline, marking the cityscape.

The Sule Pagoda was made the center of Yangon by Lt. Alexander Fraser of the Bengal Engineers, who created the present street layout of Yangon soon after the British occupation in the middle of the 19th century. Many thousands of monks gathered to pray around the pagoda.

Image Courtesy of Wikimedia and Colegota.
Sight description based on Wikipedia.
6

Surtee Sunni Jumma Mosque is a spectacular temple in downtown Yangon. It is supposedly the oldest in Yangon; it was founded in 1871. The mosque was designed in Moghul style and is similar to the mosques from India. Now the church has been renovated in the aim of preserving its initial architecture and historic value. The mosque is the place of worship of muslims, a sacred place for locals. The masses gather in this majestic temple located on Shwe Bontha street. People who enter the mosque must remove their shoes.
Image Courtesy of Flickr and brewbooks.
7

Holy Trinity Cathedral is the primary Anglican cathedral in Myanmar, located on Bogyoke Aung San Road in Latha Township, Yangon. The cathedral was designed by Robert Chisholm, a Madras-based architect, in the Indo-Saracenic style to adapt to warm and humid conditions. Construction began in 1886, with the laying of the foundation stone by Lord Dufferin, the Viceroy of India, and was completed in 1894. The stained glass windows were repaired in 2003. The cathedral is listed on the Yangon City Heritage List. The cathedral is located next to a formerly associated missionary school, Basic Education High School No. 2 Pabedan.
Image Courtesy of Wikimedia and khaipi.
Sight description based on Wikipedia.