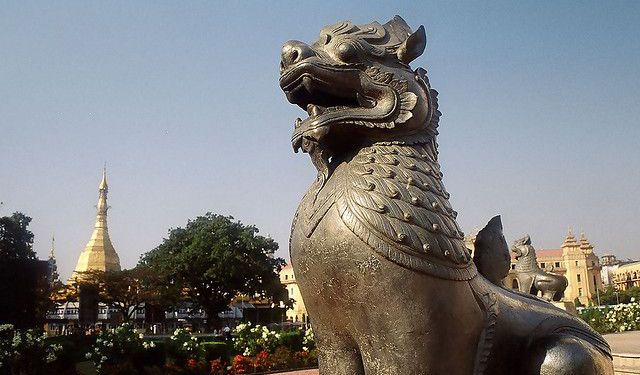 Eastern Yangon Tour will guide you to the most exciting places you've ever been. You will be able to visit the local markets so popular with tourists and locals alike, the city's historical jewels such as City Hall and High Court Building. At the end of the tour, visit the monastery and perhaps do some meditation.
Image Courtesy of Flickr and yeowatzup.
How it works: Download the app "GPSmyCity: Walks in 1K+ Cities" from iTunes App Store or Google Play to your mobile phone or tablet. The app turns your mobile device into a personal tour guide and its built-in GPS navigation functions guide you from one tour stop to next. The app works offline, so no data plan is needed when traveling abroad.

Ministers' Office is located on 300 Theinbyu Road. This building was the site where General Aung San was assassinated in 1947. Once it was the office of Ministers, and during the English colonial era it was known as the Secretariat. The building is no longer in use but it teaches about the political history of Myanmar.
Image Courtesy of Flickr and Joseph Thein.
2

High Court Building is situated on Pansodan Street near City Hall in Yangon. It is the highest court in Myanmar. It was once the residence of the highest appeals court. The building of the High Court was designed by James Ransome, a famous architect, in British colonial style. The building itself was finished in 1911 and is noted for its British Queen Anne Style architecture, built in red and white brick. It is listed on the Yangon City Heritage List. The construction features a clock tower.
Image Courtesy of Wikimedia and yeowatzup.
Sight description based on Wikipedia.
3

The British seized Yangon and all of Lower Burma in the Second Anglo-Burmese War of 1852, and subsequently transformed Yangon into the commercial and political hub of British Burma. Based on the design by army engineer Lt. Alexander Fraser, the British constructed a new city on a grid plan on delta land. The British also established hospitals including Yangon General Hospital and colleges including Yangon University.

Colonial Yangon, with its spacious parks and lakes and mix of modern buildings and traditional wooden architecture, was known as "the garden city of the East." By the early 20th century, Yangon had public services and infrastructure on par with London. The Colonial buildings were used as colonial government in fighting against oppressed in Burma.

Image Courtesy of Wikimedia and Thomas Khaipi.
Sight description based on Wikipedia.
4

Maha Bandula Garden is a recreation area and a green oasis in the city of Yangon. The park is surrounded by the most majestic buildings of the city - the Sule Pagoda, City Hall and the High Court. The park was named after General Maha Bandula who fought against the British. The park features the Independence Monument installed to commemorate Burmese independence from the British in 1948. It is popular with Tai-Chi practitioners in the mornings and evenings.
Image Courtesy of Wikimedia and Auchwaswisser.
5

Yangon City Hall is located near the Maha Bandula Garden. It was designed in syncretic Burmese style by Burmese architect U Tin and features traditional tiered roofs. The architecture of the building features some interesting details such as the green peacock ornamentation above the central doorway and Burmese artistic elements on the pillars and roof. The construction of the building was completed in 1936. Several times it was the centre of active political demonstrations.
Image Courtesy of Flickr and R Stanek.
6

Theingyi is the largest market for locals in Myanmar. The market offers all sorts of goods, such as food, clothes, cloths, cosmetics, parfumes, herbal medicines and toys. You can find absolutely everything including hand-made objects and souvenirs. The building of the market was built in 1988.
Image Courtesy of Flickr and antwerpenR.
7

Bogyoke Market was initially called Scott's Market. It is one of the largest bazaars in Yangon. The market features colonial architecture and is the most popular attraction for tourists. It offers a great variety of jewellery shops, antiques, handicrafts and clothing boutiques. It is also a place where locals come often, as they sell medicine, garments and all kinds of food.
Image Courtesy of Flickr and mckaysavage.
8

Sakura Tower is situated in the heart of Yangon. The tower was designed by Japanese architects Nihon Sekkei Inc. and was built by another company. The most amazing things that Sakura Tower can provide are the back-up generators to ensure power supply.
Image Courtesy of Wikimedia and Hintha.
9

Yangon Central Railway Station is the largest railway station in Myanmar. It was initially built in 1877 but unfortunately was destroyed in WWII, and rebuilt from 1947-1954. The building of the station is designed in traditional Burmese style. The Railway Station was added to the list of national landmarks in 1996.
Image Courtesy of Wikimedia and Auchwaswisser.
10

Theim Phyu Market is one of the most popular markets in Yangon. It was intended as a marketplace for locals. The market offers fruit, vegetables, medicinal plants, clothes and other stuff. It is a great place for tourists as it provides insight into the everyday lives of the native people of Myanmar.
Image Courtesy of Flickr and mckaysavage.
11

Shwe Kyin is a monastery in eastern Yangon. It is an absolutely perfect place to finish the walking tour. You will be able to observe the life of the monks. Every day before sunset they line up for prayer,s leaving their slippers at the entrance of the temple. The monastery is also popular for its old meditation caves, some of which date back to old times.
Image Courtesy of Flickr and h.koppdelaney.