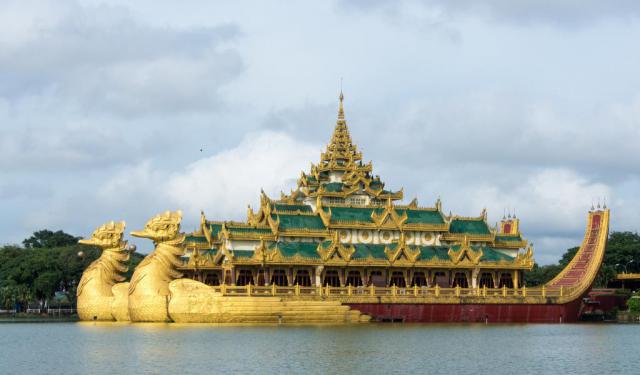 The western region of the Yangon is the most magnificent and interesting part of the city. There are many tourist attractions of the highest caliber such as the Royal Barge, Shwedagon Pagoda and the National Museum. There are many thing to see there, so take this walking tour and don't miss out on seeing some of the most spectacular attractions in western Yangon.
Image Courtesy of Flickr and Dumphasizer.
How it works: Download the app "GPSmyCity: Walks in 1K+ Cities" from iTunes App Store or Google Play to your mobile phone or tablet. The app turns your mobile device into a personal tour guide and its built-in GPS navigation functions guide you from one tour stop to next. The app works offline, so no data plan is needed when traveling abroad.

The Shwedagon Pagoda, also known in English as the Great Dagon Pagoda and the Golden Pagoda, is a 99 meters gilded pagoda and stupa located in Yangon. The pagoda lies to the west of Kandawgyi Lake, on Singuttara Hill, thus dominating the skyline of the city. It is the most sacred Buddhist pagoda for the Burmese with relics of the past four Buddhas enshrined within, namely the staff of Kakusandha, the water filter of Koṇāgamana, a piece of the robe of Kassapa and eight strands of hair of Gautama, the historical Buddha. Uppatasanti Pagoda is a same-sized replica of Shwedagon Pagoda in Naypyidaw, the new capital of Burma.

According to tradition, the Shwedagon Pagoda has existed for more than 2,500 years, making it the oldest historical pagoda in Burma and the world. However, the historians and archaeologists say that the pagoda was built by the Mon people between the 6th and 10th centuries CE. By the beginning of the 16th century the pagoda had become the most famous place of pilgrimage in Burma.

A series of earthquakes during the next centuries caused damage. The worst damage came from a 1768 earthquake that brought down the top of the stupa and it was raised to its current state by King Hsinbyushin of Konbaung Dynasty. A new crown umbrella called hti was donated by King Mindon Min in 1871 after the annexation of Lower Burma by the British. A scaffold was erected and extensive repairs to the hti were made. The pagoda is listed on the Yangon City Heritage List.

Image Courtesy of Wikimedia and Ralf-André Lettau.
Sight description based on Wikipedia.
2

The Maha Wizaya Pagoda is a pagoda located on Shwedagon Pagoda Road in Dagon Township, Yangon. The pagoda, built in 1980, is located immediately south of the Shwedagon Pagoda on Dhammarakhita Hill. The enshrined relics were contributed by the King of Nepal, while the pagoda's hti (umbrella) was consecrated by Ne Win, the country's former leader. The construction of this particular pagoda is believed by some scholars to have been a form of merit-making on the part of Ne Win. The pagoda was built to commemorate the convening of the First Congregation of All Orders for the Purification, Perpetuation and Propagation of Sasana in 1980, which formed the State Sangha Maha Nayaka Committee, a governmental regulatory body of Buddhist monks.
Image Courtesy of Flickr and Frans Devriese.
Sight description based on Wikipedia.
3

The National Museum of Myanmar, located in Dagon, Yangon, is the main museum of Burmese art, history and culture in Myanmar. Founded in 1952, the five-story museum has an extensive collection of ancient artifacts, ornaments, works of art, inscriptions and historic memorabilia, related to history, culture and civilization of Burmese people.

The National Museum of the Union of Burma was first opened in June, 1952 at the Jubilee Hall Building on Shwedagon Pagoda Road, Yangon. The museum was moved to a larger location at 24/26 Pansodan Street in 1970, and to its present location in 1996. The new five story National Museum has been open to public since 18 September 1996.

Image Courtesy of Wikimedia and Beato Felice.
Sight description based on Wikipedia.
4

The National Theater of Yangon is used for cultural exchange programs with foreign countries, for departmental workshops, religious ceremonies, prize giving ceremonies, performing arts competitions, and for musical stage shows. The theater was constructed with aid from People's Republic of China. Construction began on 3 June 1987 and completed on 30 January 1991. Of the total cost of 215.47 million kyats, the Chinese government contributed 150 million kyats and the Burmese side contributed the remainder.
Image Courtesy of Flickr and SpecialKRB.
Sight description based on Wikipedia.
5

Sein Yaung Kyi Pagoda is located across from the Defence Services Museum. The pagoda has a very particular design with glass mosaic that people refer to as the mirror pagoda. It was renovated in 1994. It is a place where people celebrate the day that the king of celestial beings descends upon humans.
Image Courtesy of Flickr and leoncillo sabino.
6

Yangon Zoo is the oldest zoo in the country of Myanmar and is considered the second largest zoo. The construction of the zoo started in 1901, and lasted for more than 20 years. It is situated close to Kandawgyi Lake. It is actually a recreational park that features a museum of natural history, an aquarium and an amusement park. Come visit a great number of animals, from the common to the rather peculiar. The zoo has more than 1300 species. It attracts about 2,2 million visitors per year. The operating hours of the zoo are from 8 am to 6 pm daily.
Image Courtesy of Flickr and druidabruxux.
Sight description based on Wikipedia.
7

The National Museum of Myanmar was founded in 1952. Priceless ancient artifacts, works of art and historic memorabilia are on display in 14 halls on four storeys. It is one of the first museums that started to collaborate with the Natural History Museum in London.
Image Courtesy of Wikimedia and thisisbossi.
8

Kandawgyi Lake is one of the biggest lakes in Yangon. It was man-made, so the water from Inya Lake runs through the pipes to Kandawgyi Lake. The aim of the creation of this lake was to provide the city with clean water. It is 5 miles long and 20 to 45 inches deep. The lake is surrounded by a park and Yangon Zoo.
Image Courtesy of Wikimedia and Hintha.
9

Karaweik or Karaweik Hall is a palace on the eastern shore of Kandawgyi Lake, Yangon. The barge was designed by Burmese architect U Ngwe Hlaing, who based it on the Pyigyimon royal barge. Construction began in June 1972 and it was finished in October 1974. The barge is a two-storied construction of concerete and stucco, reinforced by iron rods, with a pyatthat-topped roof, and two reception halls and a conference room. It houses a buffet restaurant today. The word karaweik comes from Pali karavika, which is a mythical bird with a melodious cry.
Image Courtesy of Flickr and click&render.
Sight description based on Wikipedia.