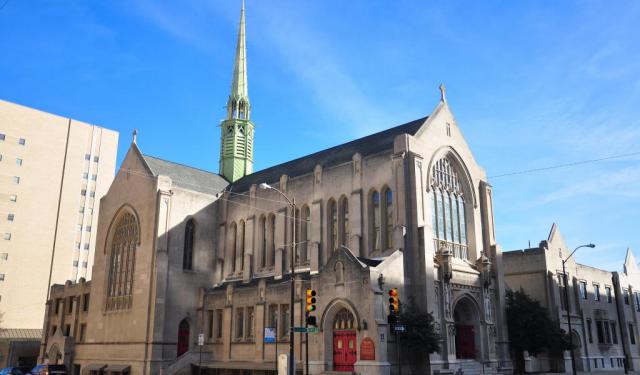 Image by mulmatsherm on Flickr under Creative Commons License.

Tulsa is home to many remarkable churches, cathedrals, chapels and religious buildings, the most beautiful of which are Holy Family Cathedral and Boston Avenue United Methodist Church. Eight of the town's oldest sanctuaries are located downtown and have congregations that number well over 1,000. Take this tour to visit Tulsa's most notable religious buildings.
How it works: Download the app "GPSmyCity: Walks in 1K+ Cities" from iTunes App Store or Google Play to your mobile phone or tablet. The app turns your mobile device into a personal tour guide and its built-in GPS navigation functions guide you from one tour stop to next. The app works offline, so no data plan is needed when traveling abroad.

Located at Fourth Street and Cincinnati Avenue, First Baptist Church dates back to Tulsa's earliest days when the town was in Indian Territory and known as “Tulsey Town”. The current church was built in 1927 and has continued to grow over the years. The church is a Gothic structure, which features one large steeple. A full renovation of the cathedral and education wing updated the look of the church. The result is a lovely facility with a footprint of more than 250,000 square feet.
Image by Robin Drew on Flickr under Creative Commons License.
2

Built in 1926, Trinity Episcopal Church is the oldest Episcopal church in town. Located at the corner of Fifth Street and Cincinnati Avenue, the church is a fine example of the English Gothic architectural style with its ecclesiastic stained glass windows and artistic wood carvings. Construction on the church began in 1921 and finished in 1926. The interior features beautiful colored floors, and these colors are matched in the ceiling. There are also stunning stained-glass windows, which depict the Apostles’ Creed.
Image by dsjeffries on Flickr under Creative Commons License.
3

The First Presbyterian Church of Tulsa was organized in 1885. It originally met in the store owned by James M. Hall and Harry C. Hall. The first permanent minister, Reverend Charles William Kerr and his wife arrived in Tulsa in 1900. Kerr remained at this church for over 40 years. Under his leadership, the church became the second largest in its denomination (the Presbyterian Church in the United States of America). This church is part of the Eastern Oklahoma Presbytery of the United Presbyterian Church in the USA (UPCUSA).
Image by David Stapleton on Wikimedia under Creative Commons License.
Sight description based on wikipedia
4

Cathedral of the Holy Family is a cathedral of the Roman Catholic Church in the United States. It is the mother church of the Diocese of Tulsa and is the seat of the prelate bishop. It is located at 810 South Boulder Avenue in the city of Tulsa in the state of Oklahoma. The architect was William P. Ginther of Akron Ohio, who built many Roman Catholic churches throughout the midwest. Construction on the current structure began May 23, 1912 and Mass dedicating the church was on April 1, 1914. It was the tallest building in Tulsa until the Mayo Hotel was built in 1923. The Diocese of Tulsa was established in 1972.

The Cathedral is also the site of the Holy Family Cathedral School, an educational institution for students from pre-school to eighth grade.

Buildings at this site were listed on the National Register of Historic Places February 11, 1982.

Image by Daniel Jeffries on Flickr under Creative Commons License.
Sight description based on wikipedia
5

Inaugurated in February 1920, First Christian Church is a remarkable landmark in downtown Tulsa. This church features a huge green cupola and four smaller cupolas, all made of Indiana limestone in the Greek style. The interior of the church impresses with its oak furniture, chandeliers, inner cupola, stained glass, decorative lamps and beautiful organ with 4,000 pipes. Construction on the church began in 1902 under the direction of famous architect J. Walton and was finished in 1920 with help from architect V. Slyke. The church is one of Tulsa's top architectural and historical landmarks.
Image by Daniel Jeffries on Flickr under Creative Commons License.
6

Located in downtown Tulsa, First United Methodist Church is one of Tulsa’s most beautiful churches. Established in January 1921, the church held religious services in the basement until 1928 when the current building was completed and officially opened. Designed by Charles Bolton, the church was built in the Perpendicular Tudor Gothic architectural style. The exterior consists of local sandstone and oak, except for the windows and beautiful arches, which are Indiana limestone and cement. The sanctuary is in the shape of a cruciform, and two large towers flank the front entrance.
Image by Daniel Jeffries on Flickr under Creative Commons License.
7

The Boston Avenue United Methodist Church, located in downtown Tulsa, Oklahoma and completed in 1929, is considered to be one of the finest examples of ecclesiastical Art Deco architecture in the United States, and has been placed on the National Register of Historic Places.

Built by a congregation of the Methodist Episcopal Church, South, it was designated a National Historic Landmark in 1999.

The original building consisted of a semicircular auditorium, a soaring 225-foot (68.5 m) tower, and a wing containing class rooms. The soaring straight lines of the tower provide physical, visual, and philosophical linkage to the Gothic Cathedrals of past ages as well as allowing the designers to indulge in the Art Deco celebration of the vertical.

In 1978 the building was listed on the National Register of Historic Places and was designated as a National Historic Landmark in 1999.

Image by Sarah J Malerich on Wikimedia under Creative Commons License.
Sight description based on wikipedia
8

Many Greek immigrants settled in Tulsa in the twentieth century and brought with them their unique set of traditions and beliefs. In 1925, a number of Greek families began to raise money to build a Greek Orthodox church. In May 1927, construction began on Holy Trinity Church, and the first religious services were held in 1928. The church moved to its current location in September 1969. You will be impressed by the exterior of the church, which is built entirely of red brick. Since the 1960s, the church has hosted an annual Greek festival, which celebrates Hellenic culture.
Image by PubliusTX on Flickr under Creative Commons License.