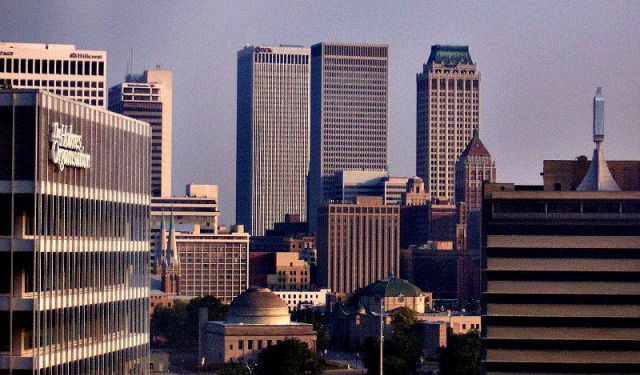 Image by jordanmac101 on Flickr under Creative Commons License.

Downtown Tulsa, sitting on the northern bank of the Arkansas River, is a place where much is going on and much to be seen. Apart from great restaurants, shops and entertainment, downtown Tulsa is also home to a number of remarkable architectural sites, such as the BOK Center, Philtower Building and Mayo Hotel. This orientation walk will guide you to some of the city's most prominent landmarks.
How it works: Download the app "GPSmyCity: Walks in 1K+ Cities" from iTunes App Store or Google Play to your mobile phone or tablet. The app turns your mobile device into a personal tour guide and its built-in GPS navigation functions guide you from one tour stop to next. The app works offline, so no data plan is needed when traveling abroad.

The Mayo Hotel is a historic building. This Chicago School (Sullivanesque) Building was built in 1925. The base of two-story Doric columns supports fourteen floors marked with false terracotta balconies, and a two-story crown of stone and a dentiled cornice. It was listed on the National Register of Historic Places in 1980.

Once the tallest building in Oklahoma, the hotel originally had 600 rooms. Ceiling fans in each room and Tulsa's first running ice water made the hotel a haven from summer heat.

Abandoned for 20 years, the Mayo seemed destined for the wrecking ball until June 2001, when the Snyder family purchased it for $250,000 and began renovation efforts. Initial efforts focused on restoring the lower floors, which became a popular venue for galas, proms, receptions and meetings. An $11.2 million project to convert seven upper floors into 70 loft apartments began in 2008.

Image by Camerafiend on Wikimedia under Creative Commons License.
Sight description based on wikipedia
2

The BOK Center, or Bank of Oklahoma Center, is a 19,100-seat multi-purpose arena and a primary indoor sports and event venue. Designed to accommodate arena football, hockey, basketball, concerts, and similar events, the facility was built at a cost of $178 million in public funds and an additional $18 million in privately-funded upgrades. Ground was broken on August 31, 2005 and a ribbon-cutting ceremony involving Tulsa musicians Garth Brooks and Hanson took place on August 30, 2008. The arena's schedule of concerts and other events began on August 31 with a community choir hosted by Sam Harris.

Designed by César Pelli, the architect of the Petronas Towers in Malaysia, the BOK Center is the flagship project of Tulsa County's Vision 2025 long-range development initiative. Local firm, Matrix Architects Engineers Planners, Inc, is the architect and engineer of record. The arena is managed and operated by SMG and named for the Bank of Oklahoma, which purchased naming rights for $11 million. Current permanent tenants are the Tulsa Oilers of the Central Hockey League and the Tulsa Shock of the Women's National Basketball Association. The facility will also host NBA preseason games and college basketball matchups on a regular basis and seek to attract national and regional sporting tournaments.

Image by Daniel Jeffries on Flickr under Creative Commons License.
Sight description based on wikipedia
3

The Brady Theater (formally Tulsa Convention Hall) is a theater and convention hall. It was originally completed in 1914 and remodeled in 1930 and 1952. The building was used as a detention center during the 1921 Tulsa Race Riot. It is listed on the National Register of Historic Places and remains in use as a theater today.

It was designed with a seating capacity for 4,200 people (including 1,300 in the balcony). The stage was 70 feet wide and 40 feet deep, and slopes 13 feet from back to front. According to the Tulsa Preservation Commission, the building also contained the only municipally owned pipe organ west of the Allegheny Mountains.

Brady Theater was listed in the National Register of Historic Places on August 29, 1979.
Image by John Hagstrom on Flickr under Creative Commons License.
Sight description based on wikipedia
4

The Oklahoma Jazz Hall of Fame is a non-profit organization that honors jazz, blues and gospel musicians in the state of Oklahoma. Housed in the former Tulsa Union Depot, the Hall of Fame is a music venue that hosts regular jazz performances. It is also a museum, displaying photographs, biographical information, artifacts, and memorabilia from musicians such as Chet Baker, Earl Bostic, Barney Kessel, and Jimmy Rushing.

The Oklahoma Jazz Hall of Fame holds an annual induction ceremony to recognize the meaningful contributions of individuals and groups in jazz, blues, and gospel music. To date, the Hall of Fame has inducted more than 100 musicians and groups.

The Hall of Fame also established the Jay McShann Lifetime Achievement Award in 1999 to honor musicians who enriched Oklahoma's music during their lifetimes.
Image by mulmatsherm on Flickr under Creative Commons License.
Sight description based on wikipedia
5

Located in the heart of downtown, the Williams Center is a magnificent 52-story office tower. Created by well-known architect Minoru Yamasaki, the complex is the crown jewel of the town's skyline and delivers perfection in design, management and operations. The center's spacious hall, embellished with the finest marble and polished metals, makes quite an impression on both locals and visitors.
Image by JustTulsa on Flickr under Creative Commons License.
6

The Philtower Building is a landmark of Tulsa. The building, which was completed in 1928, is an example of neo-gothic and art deco architecture. It was designed by Edward Buehler Delk and financed by renowned oilman and dedicated philanthropist Waite Phillips (1883–1964). It was listed on the National Register of Historic Places in 1979.

In 1941, Phillips deeded the Philtower Building to the Boy Scouts of America (BSA), along with most of his Philmont Ranch and Villa Philmonte. The income from the building was used to help support Philmont. In 1977, the BSA sold the Building to a group of local investors. This group, The Philtower LLC, is the current owner.

Originally built as a high-rise office building, floors 12-20 were converted to loft apartments in 2004, making the Philtower Tulsa's first mixed use high-rise. The building has 24 floors and is 323 feet tall.
Image by jordanmac101 on Wikimedia under Creative Commons License.
Sight description based on wikipedia
7

Cathedral of the Holy Family is a cathedral of the Roman Catholic Church in the United States. It is the mother church of the Diocese of Tulsa and is the seat of the prelate bishop. It is located at 810 South Boulder Avenue in the city of Tulsa in the state of Oklahoma. The architect was William P. Ginther of Akron Ohio, who built many Roman Catholic churches throughout the midwest. Construction on the current structure began May 23, 1912 and Mass dedicating the church was on April 1, 1914. It was the tallest building in Tulsa until the Mayo Hotel was built in 1923. The Diocese of Tulsa was established in 1972.

The Cathedral is also the site of the Holy Family Cathedral School, an educational institution for students from pre-school to eighth grade.

Buildings at this site were listed on the National Register of Historic Places February 11, 1982.
Image by Daniel Jeffries on Flickr under Creative Commons License.
Sight description based on wikipedia
8

The Boston Avenue United Methodist Church, located in downtown Tulsa, Oklahoma and completed in 1929, is considered to be one of the finest examples of ecclesiastical Art Deco architecture in the United States, and has been placed on the National Register of Historic Places.

Built by a congregation of the Methodist Episcopal Church, South, it was designated a National Historic Landmark in 1999.

The original building consisted of a semicircular auditorium, a soaring 225-foot (68.5 m) tower, and a wing containing class rooms. The soaring straight lines of the tower provide physical, visual, and philosophical linkage to the Gothic Cathedrals of past ages as well as allowing the designers to indulge in the Art Deco celebration of the vertical.

In 1978 the building was listed on the National Register of Historic Places and was designated as a National Historic Landmark in 1999.
Image by Sarah J Malerich on Wikimedia under Creative Commons License.
Sight description based on wikipedia
9

The Tulsa Fire Alarm Building is a historic Art Deco building. It was built in 1931 and served as the central reporting station for the Tulsa Fire Department. Fires were reported from alarm boxes spread around town to this building and the firemen would alert the fire station closest to the fire. At the time of its construction this system was the best available alarm system.

The building was designed by architect Frederick V. Kershner and inspired by Mayan temple design.

It was used by the Fire department until 1984. It was left vacant and fell into disrepair. In 1994, it was purchased by Martin Newman, chairman of the Tulsa Preservation Commission. In 2000, The American Lung Association of Oklahoma purchased the building as its new headquarters. After a $5 million fund-raising campaign, the renovation of the building was completed in 2005. The building was listed on the National Register of Historic Places in 2003.
Image by David Stapleton on Wikimedia under Creative Commons License.
Sight description based on wikipedia
10

Situated west of Peoria, Centennial Park offers an exciting view of downtown Tulsa. The park features green areas, numerous benches and beautiful stone walls. For those who love to stroll at night, this park is the perfect place, because the paths are all illuminated. The park is rich in fauna and is home to birds, rabbits, turtles and swans. It also has picnic tables, fountains, waterfalls, and a playground.
Image by Greg Lytle on Flickr under Creative Commons License.