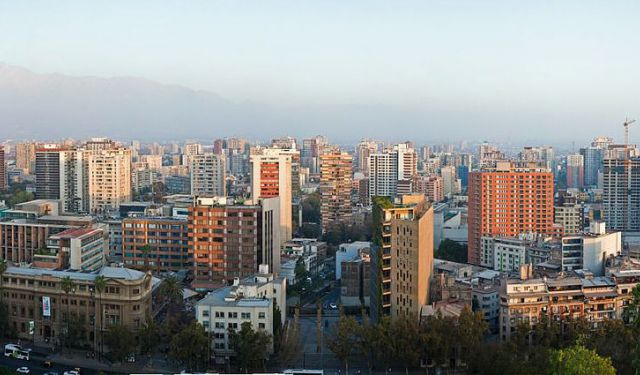 A Tour of Ñuñoa, Santiago, Chile (A)

Ñuñoa is an upper middle class residential borough (comuna, in Spanish) located to the East of Santiago Centro and South of Providencia. It’s one of the original comunas of Santiago, founded in 1894. Known as the cultural capital of Santiago, Ñuñoa is the home to artists and musicians, and contains many university campuses, theaters and the famous Plaza Ñuñoa.
This article is featured in the app "GPSmyCity: Walks in 1K+ Cities" on iTunes App Store and Google Play. You can download the app to your mobile device to read the article offline and create a self-guided walking tour to visit the attractions featured in this article. The app turns your mobile device into a personal tour guide and it works offline, so no data plan is needed when traveling abroad.

Create Your Own Self-Guided Walks in Santiago
Guide Name: A Tour of Ñuñoa
Guide Location: Chile » Santiago
Guide Type: Self-guided Walking Tour (Article (A))
# of Attractions: 6
Tour Duration: 2.0 Hour(s)
Travel Distance: 4.3 Km or 2.7 Miles
Author: Abby Hall
Author Bio: Having grown up in rural Vermont, Abby first explored Santiago, Chile as an exchange student in 2007. She returned in 2009 and has been living here ever since. Currently working with a study abroad program at a local university, she enjoys discovering the hidden gems Santiago has to offer in her free time.
Author Website: http://www.abbyline.blogspot.com
Sight(s) Featured in This Guide:
1

The National Stadium was inaugurated in 1938 and is the current home to Chile's National Soccer team, affectionately known as La Roja. Many games of the 1962 World Cup were played here, including the semifinals and finals.

In the aftermath of the 1973 military coup that brought Dictator Augusto Pinochet to power, the stadium was transformed into a detention center. More than 40,000 prisoners passed through the stadium, including around 300 foreigners.

After the transition to democracy, the stadium hosted a mega-concert for Human Rights sponsored by Amnesty International. This was a symbolic event, given the role the stadium had played during the dictatorship. Since that time, it has been host to numerous major concerts and events.

The Chilean soccer team Universidad de Chile rents the National Stadium for their games, because they don't have a stadium of their own. The other major Chilean soccer team, Colo Colo, rented the stadium as well until their new home, the Estadio Monumental, was built in 1989.

In 2008, the stadium was renamed Estadio Nacional Julio Martínez in memory of a famous Chilean sports journalist. It is still known locally as the Estadio Nacional, and sometimes as El Coloso de Ñuñoa.

The stadium is currently being remodeled and its capacity will be around 55,000 when completed. It is expected to reopen in September 2010, but the new roof will not be completed until March 2011.

Italian food is not hard to find in Santiago. Good Italian food, on the other hand, is often another story. The best Italian restaurant in the metropolitan area is undoubtedly Golfo di Napoli, owned by Italian Vicenzo Guarino. The décor is simple, but the food is undeniably delicious. However, don’t expect it to do too much damage to your wallet. Pizzas are only around $5.000 Chilean pesos, or US $10.00, while pasta dishes don’t exceed $4.000 pesos, or US $8.00. The portions are enormous, so don’t eat too much of the delicious bread will serve prior to your meal. You can also take home your leftovers, although they do charge a very small fee for the box (around $200 pesos or 25 cents).

This restaurant is what Chileans call a picada, which is an informal restaurant serving lunch specials that become well known through word of mouth. Although recently it has gained more notoriety, for many years Golfo di Napoli was not well known. You will notice that its entrance is very inconspicuous, almost hidden. However, despite this, the interior is large with ample seating. At peak lunch hours there may be a short wait for a table.
3

Mezquita As-Salam was the first mosque built in Chile, and one of two mosques in Santiago. The construction of the mosque was completed in 1989. Currently, the five daily prayers are practiced here, as well the Friday prayers, the month of Ramadan, and Eid Al Fiter and Eid al Adha, the two annual Islamic festivals. Since 1996, it has served only Sunni Muslims, while Shiite Muslims worship at the Central of Islamic Culture in Las Condes.

There are only around 4000 practicing Muslims in Chile, of mixed descent. The majority have Middle Eastern or South Asian ancestry, while others are Chileans who have converted. Some Malaysians immigrated to Santiago in 1996 after the As-Salam mosque was officially inaugurated by a Malaysian prince. Additionally, there are Syrian, Lebanese, Palestinian, Saudi Arabian and Turkish Muslims in Chile, among others.

Mesquita As-Salam administers the first Muslim cemetery in Chile, as well as a madrasa (Islamic school). They also grant the Halal certification, which assures that food, drink and medicine do not contain any ingredient prohibited by Islamic law.

If you would like to schedule a visit to the mosque, please visit their website and fill out the contact form (www.centroislamicodechile.cl) or call 56-2-3431376.
Image by Natipdelac under Creative Commons License.
4

Campus Oriente is one of five campuses that form part of the Pontifical Catholic University of Chile. The Catholic University is the second largest in Chile, and one of the most prestigious. Campus Oriente houses the departments of Visual Arts, Theater, Dance, Music and Esthetics. It is a very peaceful campus, with classrooms arranged around a beautiful inner courtyard that leads to the chapel. It was built in 1934, and was originally a convent for French Nuns who also ran an important Catholic high school for girls here until it became part of the University in 1971.

The street on which the Campus is located is called Jaime Guzmán Errázuriz, after a former Chilean senator of the same name who was assassinated right outside the gates of this campus in 1991. Gúzman was a close advisor to General Augusto Pinochet during the military dictatorship, which ended in 1990. During the transition to democracy, he founded the Union Democratica Independiente (UDI), a political party of the far right, and was elected senator. He was a professor of constitutional law at the Catholic University, and at the time had his office in Campus Oriente. He was assassinated by members of the left-wing terrorist group, the Manuel Rodriguez Patriotic Front, as he left the university.

Currently, Campus Oriente is known as the Arts Campus, and many performing arts events and art exhibits are held here. The campus is open Monday-Saturday, and you may visit the grounds as long as you are quiet and respect the students who are studying here.
Image by Hermann Kaser under Creative Commons License.
5

In the heart of Ñuñoa, the Plaza Ñuñoa is surrounded by the streets Jorge Washington and Humberto Trucco to the west, Manuel de Salas Street to the east, Dublé Almeyda Avenue to the south and 19 de Abril Street to the north. Irarrázaval Avenue cuts through the center.

At the end of the 19th century, as Santiago was expanding, Plaza Ñuñoa was created due to the way plots of land were divided. The entrances to these terrains surrounded the plaza. Today, you can see two palm trees that rise high above the rest in the southern part of the plaza—those trees date from this era.

Today the Plaza is popular for its nightlife, as it is surrounded by bars, restaurants and pubs, as well as live music venues and the Catholic University’s Theater. Since the 1980s, students and young professionals have come to the Plaza, especially to Bar Las Lanzas, on Humberto Trucco, which became known as a leftist hangout. Another classic locale, especially popular with students, is Café Dante, on the corner of Jorge Washington and Irarrázaval. It’s located right next to the Catholic University Theater, formerly Teatro Dante. For more upscale bars and restaurants, head north on Jorge Washington, or turn right onto 19 de Abril. Here you can find pubs and restaurants serving Japanese, Mexican and Spanish food, among others.

The beautiful white building you see on the northern edge of the plaza is the Municipal Building of Ñuñoa. Spreading south, the green areas of the Plaza are popular weekend hangouts for families, and you will often see people sitting on benches, eating ice cream and watching the fountain. If you look up into the tallest trees, you can see green parrots, which are actually an invasive species from Argentina. Crossing Irarrázaval, in the southern section, you can find kiosks selling books, handicrafts and other items, as well as a gazebo where outdoor concerts take place during the summer.
Image by Ninovolador under Creative Commons License.
6

Hopefully by this point in the tour, you’ve walked off your lunch at Golfo di Napoli and you’re ready for a snack, because the last stop on the tour is the Fuente Suiza. There are many “Fuentes de Soda” (literally, Soda Fountains) peppered throughout Santiago, but don’t expect a typical Soda Fountain where girls in poodle skirts serve you root beer floats. In Santiago, a Fuente de Soda most often serves sandwiches, completos (hot dogs), French fries and/or empanadas, while beer is often the drink of choice rather than soda. The Fuente Suiza is no exception.

The Laengle family opened the Fuente Suiza at this location in 1954. Originally from Switzerland by way of Argentina, that’s how the restaurant gained its name (Suiza means Swiss). The Laengle family is still part of the business, which now employs over 50 people.

The specialty of the Fuente Suiza is its fried empanadas. You can choose from cheese, cheese and shrimp, cheese and scallops or the classic pino, which is a mixture of ground beef, onions, raisins and an olive. You can order empanadas to go or eat at the counter on the first floor of the locale, or if you have a bigger appetite, go upstairs to sit down and try one of the delicious sandwiches.