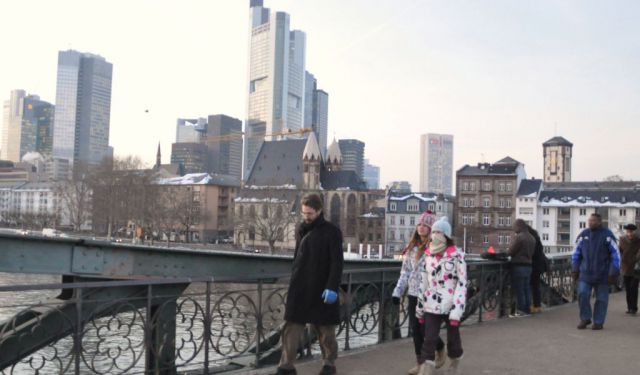 Frankfurt is where German emperors were crowned. After royalty went out of fashion, the city became a banking capital. It is also known for the Frankfurter, a sausage invented in Vienna in 1805 by a butcher trained in Frankfurt. The confusion over Frankfurters and Vienna sausages continues today. With 620,000 residents, Frankfurt is compact. So is this walking tour. We’ll show you where to shop, the main sights and more - with or without mustard.
Image Courtesy of Joe Mapother.
This article is featured in the app "GPSmyCity: Walks in 1K+ Cities" on iTunes App Store and Google Play. You can download the app to your mobile device to read the article offline and create a self-guided walking tour to visit the attractions featured in this article. The app turns your mobile device into a personal tour guide and it works offline, so no data plan is needed when traveling abroad.

Create Your Own Self-Guided Walks in Frankfurt
Guide Name: Frankfurt Basic
Guide Location: Germany » Frankfurt
Guide Type: Self-guided Walking Tour (Article (A))
# of Attractions: 10
Tour Duration: 2.0 Hour(s)
Travel Distance: 3.5 Km or 2.2 Miles
Author: Joe Mapother
Author Bio: Joe Mapother is a journalist who has lived and worked in Europe for most of the past 30 years, the last five of them in Frankfurt. Still an inveterate wanderer, Joe last year began turning that experience into travel pieces to make the journey easier for others.
Sight(s) Featured in This Guide:
1

The Hauptwache is named after a former police station in the center of the square, although the building has been a café for more than 100 years. This square is a hub for shoppers. A broad pedestrian zone named the Zeil begins at the Hauptwache. To find it, look for the big department store on the square with a green sign saying Galeria Kaufhof. If you choose the opposite direction you will follow the Biebergasse to a street of stores and outdoor cafes known as the Fressgass. Running parallel to, and one block away from the Fressgass is Goethestrasse, the most exclusive shopping street in town.
2

The old opera house, the Alte Oper, is not really very old, but it is nonetheless a city landmark. The current version opened its doors to the public in 1981 after decades of efforts to restore the structure that was left a shell by World War II. The new, old operahouse closely resembles the building opened in 1880 with one big difference. It no longer is home to the city opera company, which moved to a theater built after the war. A faithful reproduction of the opera house of 1880 on the outside, the inside of the Alte Oper is functional. The building now mostly hosts concerts, musicals and conventions.
3

This 154-foot (47-meter) tower was part of the medieval fortifications of Frankfurt. A bar and restaurant is located in the base, which used to be a gate into the walled city. The tower was built in 1346 and expanded 80 years later. This landmark almost became a footnote in history early in the 19th Century when Frankfurt decided to tear down the old fortifications, however a French nobleman convinced city officials to save the tower. The outline of those defenses is visible today in the form of a park that rings the old city.
4

The stock exchange, known as the Deutsche Boerse, traces its roots to 1585 when merchants gathered to work out exchange rates for the many forms of money used to buy goods at Frankfurt trade fairs. The current building traces its roots to 1879. The stock exchange was heavily damaged in a 1944 bombing raid and rebuilt. Because most trading is done electronically, there is not much action on the floor of the stock exchange today. Tours of the exchange are possible on weekdays between 10 a.m. and 6 p.m. Prior registration is necessary (e-mail: visitors.center@deutsche-boerse.com). Tours must be arranged at least one day in advance. English language tours are available.
5

Johann Wolfgang von Goethe was born in Frankfurt in 1749 and spent his youth there, moving away for good in 1775. Probably the best known German-language poet, Goethe wrote the ‘Sorrows of Young Werther’ and a draft of ‘Faust’ while in Frankfurt. Only the foundation walls of the house survived World War II. Restored to its original state in 1951, the spacious house offers a glimpse into the patrician roots of the writer and his family. The Goethe Museum next door displays paintings from Goethe’s time. Opening hours: Mon-Sat 10 a.m.- 6 p.m. , Sun 10 a.m.- 5:30 p.m. Admission: 5 euros (adult).
6

The Paulskirche (Church of St. Paul) is where the German National Assembly met for about a year beginning in March, 1848, to draw up a constitution for a united Germany. Elements of a liberal democratic government were agreed to, but it was not to be. Police and troops broke up the assembly for good after it fled to Stuttgart in 1849. That set a precedent that would not serve Germany well in the next 100 years. One of the reformers, Carl Schurz, emigrated to the U.S. where he advised President Abraham Lincoln to free the slaves, represented Missouri in the U.S. Senate after the Civil War and served in the Cabinet of President Rutherford B. Hayes. The Frankfurt church was rebuilt after it was destroyed in World War II. Open daily 10 a.m. - 5 p.m.
7

City Hall, known as the Roemer, occupies one side of this sprawling central square. The Roemer has served as the seat of government for more than 600 years. The Roemer's long stone balcony is where sport champions traditionally greet the nation upon returning home. Max Schmeling stood there in 1936 after taking the heavyweight championship from Joe Louis. The national women’s soccer team celebrated their World Cup victory there in 2003. A colorful row of rebuilt half-timber houses stands across the square from the Roemer. You may encounter a wedding party in the square. All German marriages must be sealed in civil ceremony, and the Civil Registry is located in the Roemer. Stop in at the tiny coffee shop in the half-timbered house on the left end of the row.
8

Eiserner Steg is one of two pedestrian bridges linking downtown Frankfurt to the Sachsenhausen district along the south bank of the Main River. Originally built in 1868, this iron bridge is 174 meters long (571 feet) and arguably the most picturesque of the half-dozen downtown bridges. The span offers a superb view of the skyscrapers that form Frankfurt's skyline and provides access to riverbank walkways on both sides of the Main. During summer months, floating restaurants are moored at the base of the bridge on the Sachsenhausen side. The river is part of the official name of the city - Frankfurt am Main - because there is another Frankfurt on the Oder River in eastern Germany. The skyscrapers of Frankfurt am Main are Germany’s answer to New York City, hence the nickname; Mainhattan.
9

The main cathedral is named after Saint Bartholomew because part of the apostle's skull is interred there as a relic. The church is popularly known as the Emperor Cathedral (Kaiserdom) because monarchs were chosen and crowned there beginning in 1356. The last of 10 coronations in the red sandstone edifice was held in 1792. After about a decade of renovations that hid the tower behind scaffolding, the 95-meter (312 feet) spire and its view of Frankfurt were opened again to visitors in 2010. Tower admission is three euros for adults. Access can be influenced by weather. There is no charge to tour the cathedral floor. To the left of the entrance is a museum which is closed Mondays. The cathedral floor is open from 9 a.m. to noon, except Friday, and from 2:30 p.m. to 6 p.m. Excavated ruins of two Roman baths and a building from the Merovingian period next to the cathedral bear witness that this is the oldest part of Frankfurt.
10

Although the building has the functional charm of a 1950s-era German railway station, the produce and gourmet market in the Kleinmarkthalle has a laid-back atmosphere prized by downtown residents. When city officials proposed tearing it down in 2005, the ensuing uproar made it clear the building and its more than 60 stands will be around for years to come. The market is both a place to buy fresh produce and to pause for a wine, coffee, or maybe a Frankfurter. With mustard. Opening hours: Mon. – Friday 8 a.m. – 6 p.m. Sat. 8 a.m. – 4 p.m.