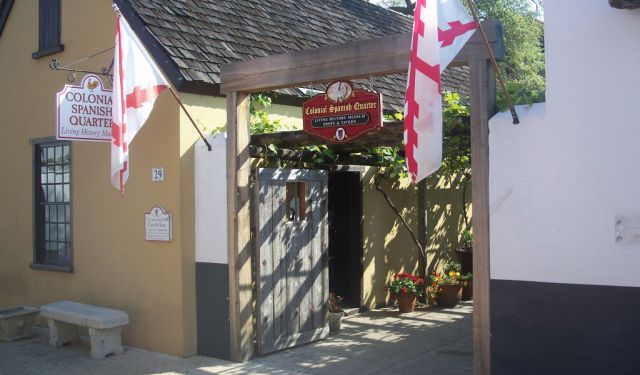 St. Augustine is considered the oldest, permanent European settlement in the USA. It's not a huge city area-wise, but it is filled to the brim with amazingly beautiful historic sites and attractions! This tour begins in the north at the Castillo de San Marcos fort and makes its way through the heart of the city-center, ending at the Grace United Methodist Church, where the next tour picks up if you’re interested in doing them back to back.
Image Courtesy of Wikimedia and Ebyabe.
This article is featured in the app "GPSmyCity: Walks in 1K+ Cities" on iTunes App Store and Google Play. You can download the app to your mobile device to read the article offline and create a self-guided walking tour to visit the attractions featured in this article. The app turns your mobile device into a personal tour guide and it works offline, so no data plan is needed when traveling abroad.

Guide Name: Old Down-town Part I: North
Guide Location: USA » St. Augustine
Guide Type: Self-guided Walking Tour (Article (A))
# of Attractions: 8
Tour Duration: 2.0 Hour(s)
Travel Distance: 1.6 Km or 1 Miles
Author: Stefan Siewert
Author Bio: Dana Newman has a bachelor’s degree from the College of Journalism and Communications at the University of Florida. After receiving her degree she followed her dreams to Europe to live an adventure and collect experiences, which she now writes candidly about from her present home in Munich, Germany. She considers it an honor to be able to live the life she’s imagined.
Sight(s) Featured in This Guide:
1

Since St. Augustine’s foundation in 1565 there has been a fort to defend the city. The original 9 forts that were built around the city no longer exist since the wood they were made of either decayed away naturally, was eaten by termites, or was burned down by pirates. The stone fort you see today is considered to be St. Augustine’s grandest historic landmark and was built in 1672. Nowadays, St. Augustine is a part of the USA, but back in 1672 it was owned by the Spanish while the Virginia and North Carolina colonies to the north of it were owned by the English. The Spanish began building the Castillo de San Marcos fort in an effort to ward off the British who were slowly but surely encroaching on their eastern seaboard.
2

The construction of St. Augustine’s City Gate was completed in 1739 and provided sole entrance into the city from the north. Originally it was made from the same materials as the Cubo Defensive Line, which was an earthwork surrounding the city to protect the inhabitants. In 1808, however, the present-day coquina pillars, which are pillars made from local coquina stone-shells, were put in place and the wall was strengthened with the stone work that you can see on both sides. In the early 1900s the town wanted to demolish the City Gate but a group of local women came together to stop them. This was one of the first documented cases of historic preservation in St. Augustine.
3

The name of this attraction is a bit misleading as the building never actually was used as a schoolhouse, as the owners would like you to believe. But that’s not to say that this building isn’t special! It was built circa 1800 by a Greek carpenter and is the oldest wood-frame building still standing in St. Augustine today. The private house did not get labeled as a schoolhouse until 130 years after its construction. In 1930 a photographer named William J. Harris bought the structure with the intent of showcasing it as historic schoolhouse, even though it never really was one. To this day that is how the building is presented.
4

Take a leap back in time as you enter inside the Spanish Colonial Quarter Museum. Inside the gates (which, yes, you must pay a fee to get through) you will find yourself suddenly immersed in another world; the typical world of a St. Augustine Spaniard in the 1740s. Open 9am to 4:45pm, 7 days a week, the interactive museum will introduce you to hard-working and very busy blacksmiths, carpenters or the wives of soldiers. But don’t worry, they find plenty of time to stop what they are laboring over and answer any questions that you might have.
5

The Avendia Menendez is a scenic north-south road that was named after Pedro Menendez, the Spanish explorer and admiral who founded St. Augustine in 1565. The first sea wall against this street was constructed in the 1690s and was repaired several times until the 1830s when the United States of America finally replaced the original stone-shell coquina with concrete and granite. The section of the seawall north of the Plaza de la Constitucion is from the 1950s; at that time the street that is now Avenida Menendez was widened and that part of the seawall had to be rebuilt once again. Enjoy a stroll along the beautiful avenue.
6

Plaza de la Constitucion is a park chock-full of history; which is a pretty easy thing to accomplish when you’re the oldest public park in the USA! The Plaza, as the locals call it, was ordained to be built by the Spanish in 1573 but wasn’t actually laid out until 25 years later. In 1598 it was built following the ordinance’s strict rules which included having all principal buildings (government or church owned) facing into the Plaza and absolutely no private buildings located around it. All throughout the park are important historical landmarks, including the historic Government House which is from the early 1700s, the Cathedral-Basilica of St. Augustine which was built in the late 1700s, and an old public well that dates back to the 1600s. The Plaza was the center of community life and many important things have occurred here, including the exchange of flags when Florida passed from Spain to the United States, the inauguration of many governors, and official ceremonies and parades.
7

The St. Augustine Walking Mall is considered a must see for visitors and is located on St. George Street. It is closed to vehicles, but watch out! People are allowed to drive on the roads that intersect the pedestrian-only zone, so keep your eyes open at all times. St. George Street was erected due to a decree by King Phillip the II in 1598. About 360 years later when restoration of the roads began, St George Street is the one that the builders paid most attention to. This street is where to go to get a mix of historic buildings, boutique shops, delicious fudge, ice cream and other varied savory cuisine.
8

In 1886 Henry Flagler began construction on the Ponce de Leon Hotel. He had grand plans for this hotel and its courtyard, but there was one small problem; the Olivet Church sat where he wanted to build. To solve his dilemma Mr. Flagler bargained with the trustees. He offered to not only give them the land on the corner of Carrera Street and Cordova Street, but to build them a new, beautiful church as well, in exchange for the land on which the Olivet Church was located. They took him up on his offer and he had the same architects that would build his hotel build the trustees’ new church, which is why the Grace United Methodist Church has the same Mediterranean Eclectic style as the Flagler buildings.
Image Courtesy of Ebyabe.