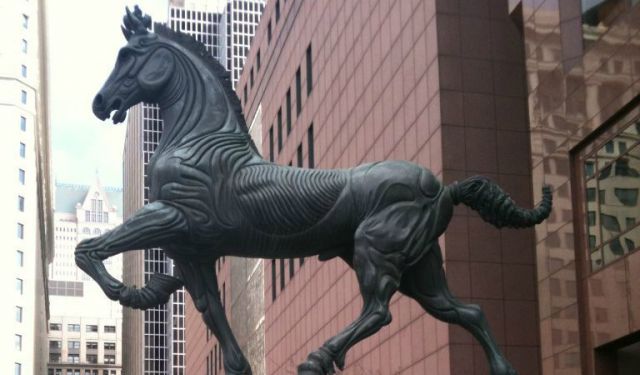 From Jean Dubuffet's "Monument With Standing Beast" to Anish Kapoor's "Cloud Gate," this walking tour winds through down town Chicago, passing some of the city's landmark buildings and stopping at monumental sculptures commissioned from some of the most important artists of their time. Take this tour in the morning or early afternoon, and stop at one of the many coffee houses or cafes along the way for a morning pick-me-up or mid-day meal.
This article is featured in the app "GPSmyCity: Walks in 1K+ Cities" on iTunes App Store and Google Play. You can download the app to your mobile device to read the article offline and create a self-guided walking tour to visit the attractions featured in this article. The app turns your mobile device into a personal tour guide and it works offline, so no data plan is needed when traveling abroad.

Create Your Own Self-Guided Walks in Chicago
Guide Name: Outdoor Sculpture in Chicago
Guide Location: USA » Chicago
Guide Type: Self-guided Walking Tour (Article (A))
# of Attractions: 10
Tour Duration: 2.0 Hour(s)
Travel Distance: 3.8 Km or 2.4 Miles
Author: Bridget Joyce
Author Bio: Bridget Joyce is an interactive writer and editor living and working in Chicago. She studied journalism and political science at the University of Wisconsin at Madison and fine arts at the School of the Art Institute of Chicago. She has worked professionally writing travel articles, children's books, and marketing copy for a large technology company.
Sight(s) Featured in This Guide:
1

Standing in the power vortex between City Hall and the State of Illinois Center, this 29-foot fiberglass sculpture is the work of the French anti-establishment artist, Jean Dubuffet (1901-1985). His paintings and sculptures turned conventional notions of artistic beauty on their head and inspired the next generation of artists to explore a primitive style. Dedicated in 1984, "Monument With Standing Beast" is one of three large-scale sculptures Dubuffet rendered in his raw style, which was influenced by graffiti, street art, and the artwork of primitive people and children. The three sides of this sculpture represent a free portal, an animal, and an architectural structure. Dubuffet left the center open, so viewers can experience it from within. You can see more work by this artist at the Museum of the Art Institute of Chicago.
2

Stop walking when you reach a 45 degree angle from the back corner of Pablo Picasso's (1881-1973) untitled sculpture. From this vantage point, you can clearly see the profile of a woman's head that gave this work its unofficial title, "Head of a Woman." The rectangular protrusion at the top is her nose, and the two points on the vertical sheet appear to be her lips. Picasso revolutionized the world of painting, but he still followed the traditional method of applying paint to a surface. He made his most radical contributions to the medium of sculpture by creating works composed of linear and planar elements that are "built," rather than "carved" like his predecessors' work. The City of Chicago offered Picasso a $100,000 payment for his design, but he refused it, calling it his "gift to the people of Chicago." Newspaper accounts from the 1967 unveiling of this untitled piece report both applause and jeers from the attending crowd. Despite its original reception, the Chicago Picasso has become one of the most famous and cherished landmarks of the city.
3

Where Picasso's sculpture relied heavily on geometric forms and lines which characterized his cubist style, this untitled sculpture by Joan Miró (1893-1983) uses the artist's signature organic lines to create an abstraction of the female form. The ceramic tile inlays are said to represent the sun and moon, while the bronze headdress represents a star, giving the figure her unofficial title, "Sun, Moon, and One Star." The mixed media sculpture was dedicated on April 20, 1981, which also happens to be the artist's birthday. Bruce Graham, an architect at Skidmore, Owings, and Merrill, who designed the surrounding Brunswick Building and plaza, was instrumental in convincing Miró not only to design the piece, but also give the design as a gift to the city. Graham said he knew that Miró liked to best each of Picasso's accomplishments. So when he visited the artist in Spain, he told Miró that Picasso had donated a design for a sculpture across the street, and Miró decided to donate his as well. Unlike Picasso, Miró came to Chicago to see the site. According to Graham, the artist enjoyed visiting jazz clubs at night so much, he would stand up and shout "Olé!" during the performances. (Chicago Architects Oral History Project at the Art Institute of Chicago)
4

Louise Nevelson (1899-1988) is the first critically acclaimed female sculptor in twentieth-century America. She moved to the U.S. from the Ukraine with her family at age six, and began her artistic career in 1920. For the next 30 years, the artist worked in relative obscurity and lived in poverty. By the 1950's she began to gain the critical recognition that would secure her place in art history books. "Dawn Shadows" is one of Nevelson's signature large, monochromatic sculptures. Rendered in painted steel, this structure is inspired by Chicago's elevated train system, which passes by just a few feet away. Until the end of her career, Nevelson painted almost every sculpture matte black. She has said: "You see, it says more for me than anything else. In the academic world, they used to say black and white were no colors, but I'm twisting that to tell you that for me it is the total color. It means totality. It means: contains all." (louisenevelsonfoundation.org) The title of this sculpture also reflects one of the major themes of her work. The artist sought to explore the in-between spaces among the objects she used, spaces she called "dawns and dusks."
5

"San Marco II" stands midstride atop a fountain in the plaza outside the Chicago Stock Exchange. Designed by the famed Venetian painter, Ludovico De Luigi (b.1933), the horse is one of a series of equestrian sculptures by the artist. Dreamlike in its appearance, "San Marco II" is patterned with symbolic lines and swirls, reminiscent of De Luigi's surreal, classic-inspired paintings. Born into a family of painters and aware of the latest movements in modern art throughout his life, De Luigi began his training under his father, the abstract painter Mario De Luigi. After studying with his father, the son mastered his craft by copying the paintings and drawings of the Old Masters and developed a virtuosity that would be seen in his mature works.
6

6) "Agriculture and Industry" by Unknown

The granite goddesses of "Agriculture and Industry" once stood on a ledge over the main entrance of the first Chicago Board of Trade building. The statues were lost after the building's demolition in 1929, which made way for the current art deco building designed by Holabird and Root. Almost 50 years after they vanished, the original "Agriculture and Industry" goddesses were discovered in a forest preserve outside of Chicago. They were restored and returned to their home in 2005. Interestingly, there is another carved goddess at this site. If you look up, you will see a statue of the goddess Ceres perched atop the building. When it was built, the Board of Trade Building was the tallest in the city. The sculptor left her face blank because no other buildings were tall enough for their inhabitants to see that she had no face.
7

Elephants, calliopes, and horses marched through the streets of Chicago in 1974 to dedicate this six-story red steel flamingo. Designed by Alexander Calder (1898-1976), the blazing sculpture stands in high contrast to the surrounding minimalist federal buildings by Mies van der Rohe. Calder was born into a family of artists, his father a sculptor and his mother a painter. Perhaps best known for his intricately balanced wire mobiles, Calder came to be an artist in his own right indirectly. After high school, he earned an engineering degree and worked various jobs in the field following graduation. One morning while he was working as a fireman in the boiler room of a ship, he awoke on deck to see the full moon setting on one horizon and a dazzling sunrise on the opposite horizon. This transformative experience led Calder to answer his calling to be an artist. You can see mobiles and paintings by Calder at the Museum of the Art Institute, the next stop on this tour.
8

At first glance, the two lions that flank the steps of the Museum of the Art Institute of Chicago look exactly alike. But closer observation reveals that the south lion "stands in an attitude of defiance," while the north lion is "on the prowl," according to their sculptor, Edward Kemeys (1843-1907). A Civil War veteran and largely self-taught sculptor, Kemeys originally designed the animals for the World's Columbian Exposition where he displayed 12 of his sculptures. The lions were exhibited outside the Fine Arts Palace, which is now the Museum of Science and Industry. Mrs. Henry Field, the wife of Marshall Field's younger brother, funded the sculptures' recasting and installation at the entrance to what was then the Art Institute's new building in 1894. The lions have become one of the most famous symbols of Chicago and wear festive wreaths around their neck to celebrate the winter holidays. They have even donned the helmets of the city's sports teams.
9

9) "The Crown Fountain" by Jaume Plensa

Stone gargoyles spout water from the classical fountains of Europe. But for the "The Crown Fountain," Spanish sculptor Jaume Plensa (b. 1955) re-imagines ordinary Chicagoans as contemporary gargoyles as their faces appear on two 50-foot, LED-lit glass and steel towers, spout a stream of water from their mouth, and smile. A team of students and professors from the School of the Art Institute completed the video production for "The Crown Fountain." About 1,000 Chicago residents sat in a dentist chair while being filmed by a high-definition camera turned on its side to meet the vertical dimension of Plensa's design. Like much of the artist's work, the fountain has many elements about conversation—two people face each other on the towers, people and meet and chat on the surrounding benches, and a shallow reflecting pool allows hundreds of city residents gather to play in the water together. Since its dedication in July 2004, the fountain has become a favorite way for Chicagoans to cool off on hot summer days. Like the Buckingham fountain, it is turned off during the cold winters and resumes function when the warm weather returns.
10

"It may be the most valuable insight into Anish Kapoor's (b. 1954) work to suggest that the presence of an object can render a space more empty than mere vacancy could ever envisage." (essay by Homi K. Bhabha on the artist's website). The polished-to-a-mirror steel "Cloud Gate" offers the perfect illustration to this point. It bends a reflection of the sky and skyline along its convex exterior, making the sculpture itself almost invisible. The center "gate" allows visitors to enter the piece and contemplate their own reflection in the concave funnel. Born in Bombay, India, Kapoor was educated in London, the city where he currently resides, and he has shown his work in exhibitions across the globe. Inspired by the look of liquid mercury, "Cloud Gate" is Kapoor's first public outdoor work and was dedicated in 2004 with the official opening of Chicago's Millennium Park.