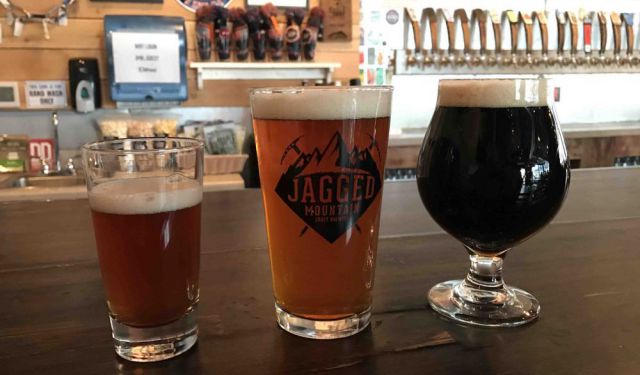 While Colorado may be known best internationally for being the first state to legalize marijuana, it is also very well known for its craft beers. Breweries have become very popular, and they seem to be on every corner! A few of my friends from Dallas came into town, and of course, they wanted to try out a bunch of breweries. As such, we created our own brewery tour.

Our first stop was at Great Divide Brewing Company which was opened in 1994 when Denver’s craft beer industry hardly existed. Over time, Great Divide Brewing Company became one of America’s most decorated craft breweries. While Eric tried the Yeti Beer which appeared to be pretty popular, Steve and I tried sample flights. Both of us thought they were good and well priced! The brewery sells a variety of T-shirts and such, but only popcorn for food. A guacamole food truck was parked outside the brewery when we left around 1pm, but it wasn’t open yet.

Our next stop was at Jagged Mountain Brewery just a few blocks from Great Divide. Here I tried the Cougar Slayer. With that name, it may have been better suited for a male, but the blackberry saison sounded good to me. None of us tasted any blackberry in the Cougar Slayer, so that was a bummer, but the boys liked some of the other IPA’s. Neither had seen a 17.5% alcohol beer, so Steve and Eric ordered it to share. It tasted almost like molasses…it was very syrupy. We really liked the vibe at this brewery that had much more seating than the Great Divide. As with most breweries, it only sold popcorn, so it was time for us to find a place with food. ...... (follow the instructions below for accessing the rest of this article).
This article is featured in the app "GPSmyCity: Walks in 1K+ Cities" on iTunes App Store and Google Play. You can download the app to your mobile device to read the article offline and create a self-guided walking tour to visit the attractions featured in this article. The app turns your mobile device into a personal tour guide and it works offline, so no data plan is needed when traveling abroad.