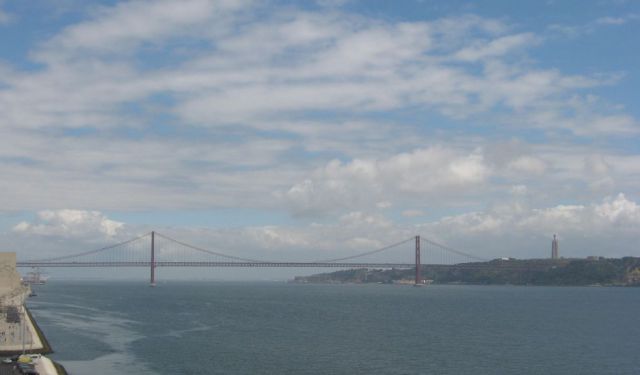 On the second day of our honeymoon in Lisbon we took the tram no.15 from Praça da Figueira to Belém area. Unfortunately it wasn’t one of those old-fashioned rickety trams but a new one which was very crowded. Still, I enjoyed the long ride along the river Tagus from the center of Lisbon to Belém which is famous for several historic landmarks namely the Tower of Belém and the Jerónimos Monastery. It was cloudy but during the day the sun emerged from under the clouds and we got sun-burnt! I had planned to take a sun cream on this trip but I simply forgot so we bought one later in the center to prevent future sunburns.

We got off the tram at the grandiose Jerónimos Monastery but we first visited almost equally impressive Monument to the Discoveries. This enormous monument at the waterfront was built in 1960 to commemorate the 500th anniversary of the death of Portuguese prince Henry the Navigator who sponsored many expeditions. It was under his patronage that Portugal founded its first colonies and the Age of Discoveries began. The monument represents a caravel (ship) and it celebrates not only Henry the Navigator but many Portuguese heroes associated with the Age of Discovery such as explorers, cartographers, artists, missionaries, kings etc. We walked around it and then entered and decided to take a lift up the viewpoint. We had discount because of our Lisbon card which gave us free public transport and many free entrances. From the top of the monument we saw the Tower of Belém which looked small in comparison (the Monument to the Discoveries is 52 m high), the monastery, Belém cultural center, a football stadium and the beautiful red bridge (Ponte 25 de Abril ) that resembles the Golden Gate bridge in San Francisco, USA and the Christ statue which is a smaller twin of the Christ statue in Rio de Janeiro, Brasil. When we got down we walked across the huge pavement compass rose and world map; a gift from the Republic of South Africa. Since it was already getting hot I needed a refreshment in the form of ice-cream (I had mulberry flavour) so that I could walk to the romantic Tower of Belém. ...... (follow the instructions below for accessing the rest of this article).
This article is featured in the app "GPSmyCity: Walks in 1K+ Cities" on iTunes App Store and Google Play. You can download the app to your mobile device to read the article offline and create a self-guided walking tour to visit the attractions featured in this article. The app turns your mobile device into a personal tour guide and it works offline, so no data plan is needed when traveling abroad.