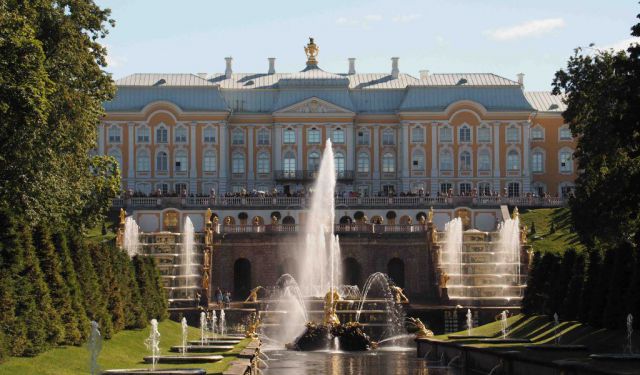 We arrived at St. Petersburg early Tuesday morning as we passed by industrial docks ladened in a dump yard of discarded metal as well as piers of churches adorned in gold. We signed up for a full day tour called “Imperial St. Petersburg”. Choosing a tour option provided by the cruise ship eliminated the need for us to personally apply for a Visa. This was handled for us. I suppose the negative to this choice was that we were limited to going on land unless we were with a tour, but at the same time I read in a travel book that tours are the best option as taxi driver’s don’t speak English.

With only two days in St. Petersburg, however, our options were a little limited. We wanted to see the Hermitage, but with all the sites, we didn’t want to be in one place for four hours, so that is how we chose the Imperial St. Petersburg tour for our first day. The tour included visiting Peter the Great’s summer palace called Peterhof, Decembrists’ Square which is home to the famous Bronze Horseman statue of Peter the Great and St. Isaac’s Cathedral, the Church of the Resurrection (Church on the Spoiled Blood), a tourist shop, and a traditional Russian lunch. I learned later after reading a travel book, that we could have signed up for an extensive two day tour operated locally by Denrus (www.denrus.re/) which may have been a better choice, but who knows. Another operator was Red October (redoctober.us/). ...... (follow the instructions below for accessing the rest of this article).
This article is featured in the app "GPSmyCity: Walks in 1K+ Cities" on iTunes App Store and Google Play. You can download the app to your mobile device to read the article offline and create a self-guided walking tour to visit the attractions featured in this article. The app turns your mobile device into a personal tour guide and it works offline, so no data plan is needed when traveling abroad.