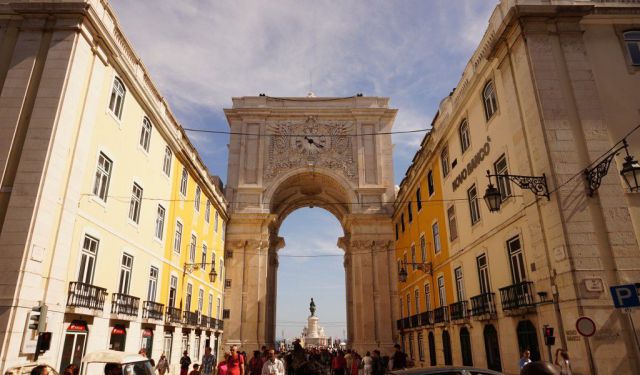 Lisbon is the capital city of Portugal and the westernmost European urban conglomerate along the Atlantic coast. It is one of the oldest cities in the world and one of the most-visited cities in southern Europe. It is home to majestic cathedrals and monasteries, a colorful city landscape and charismatic neighborhoods.

Once again we were blessed with a very warm welcome to the city when we arrived at Lisbon airport. The sun kissed us a good morning when we departed the aircraft and headed towards the subway, en-route to the city center of Lisbon. A short ride and we arrived at one of the main stations in the city named Rossio, which is also known as the center of Lisbon. We chose to stay at the Lisbon Travellers House, a very nice and central place to stay while discovering the town.

Staying on the Rua Augusta, a main pedestrian street of the city, we had a nice view downtown towards the Praça do Comércio (Commerce Square) with the famous Arch leading you towards the sea which was just infront of the square. ...... (follow the instructions below for accessing the rest of this article).
This article is featured in the app "GPSmyCity: Walks in 1K+ Cities" on iTunes App Store and Google Play. You can download the app to your mobile device to read the article offline and create a self-guided walking tour to visit the attractions featured in this article. The app turns your mobile device into a personal tour guide and it works offline, so no data plan is needed when traveling abroad.