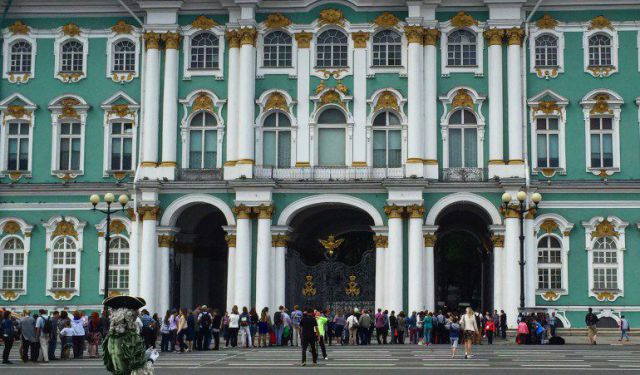 I’ve never thought about visiting Saint Petersburg until I studied it at school in World Destination class. When I read about its unique churches and that the Hermitage Museum is one of the most important museums of the world I immediately became fascinated with this city. In addition, the fact that the city was beautifully designed mainly by French and Italian architects enticed me to visit it.

I landed in Saint Petersburg after a 1h20min flight from Moscow. From the airport buses depart very often, connects to the subway line, and it is a very short and cheap ride, less than US$1. Moskovskaya is an old and quite intriguing station with thick walls and you only see the train when it arrives and the cast iron door opens. From there I headed to the hotel located near the main avenue Nevsky Prospekt, which is wide and very busy, full of stores, restaurants, hotels and beautiful buildings.

After the check-in and lunch I took a bus to the Hermitage Museum. The bus went straight down Nevsky Avenue and as I walked to the museum I could see a big and impressive arch to access Palace Square, where the museum is located. Palace Square is very huge and one of the most important squares in Saint Petersburg. In the middle of it is Alexander Column, a single monolith of red granite topped with an angel holding a cross, almost 4m high and represents the Russian military victory against Napoleon. On one side stands The Winter Palace (The Main Museum complex) a monumental baroque style building, and on the other side The General Staff Building (also part of the Hermitage Museum) united by an arch to some government buildings. ...... (follow the instructions below for accessing the rest of this article).
This article is featured in the app "GPSmyCity: Walks in 1K+ Cities" on iTunes App Store and Google Play. You can download the app to your mobile device to read the article offline and create a self-guided walking tour to visit the attractions featured in this article. The app turns your mobile device into a personal tour guide and it works offline, so no data plan is needed when traveling abroad.