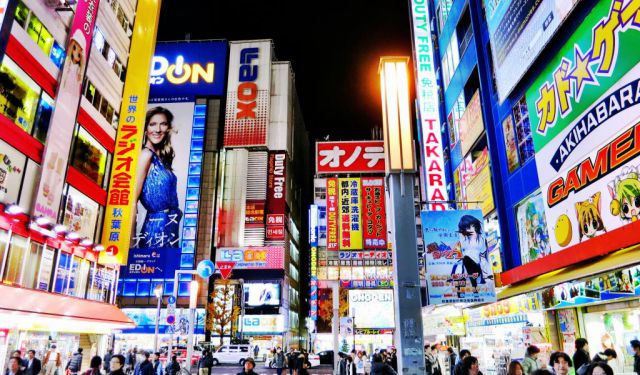 Image by Yuichi Kosio on Flickr under Creative Commons License.

Enter a wonderful world of gaming and technological delights when you set foot in the Akihabara district. Also known as the "Electric Town" of Tokyo, this is where you will find many electronics stores, ranging from tiny stalls to shops spread across several floors. They include the nine floors of Yodobashi Camera. Many people claim this retail center is the largest electronics store in the world. Akihabara’s outlets sell just about everything that is electronic, from computers and televisions to mobile phones, home appliances and associated accessories. Take your time browsing the stores along Akihabara’s main drag, Chuo Dori and then detour down roads and alleys leading off it, which are also filled with shops.

Akihabara attracts many otaku, the name given to people in Japan who have obsessive interests, particularly in anime and manga and this locale is regarded as something of a gamer's paradise. There are lots of anime/manga cartoon merchandise, video games, figurines and other collectables. Investigate the anime phenomena at the Tokyo Anime Center where there are anime exhibitions, events, toys, souvenirs and stationery. For an interesting diversion, go to the 8th floor of the discount chain Don Quixote to watch the girl group AKB48 perform daily shows in their own theater. The group is one of Japan’s highest-earning musical acts.
How it works: A discovery walk features a route using which you can explore a popular city neighborhood on your own. This walk, along with other self-guided walks in over 1,000 cities, can be found on the app "GPSmyCity: Walks in 1K+ Cities" which can be downloaded from iTunes App Store or Google Play to your mobile phone or tablet. The app's built-in GPS navigation functions allow following this walk route with ease. The app works both online and offline, so no data plan is needed when traveling abroad.