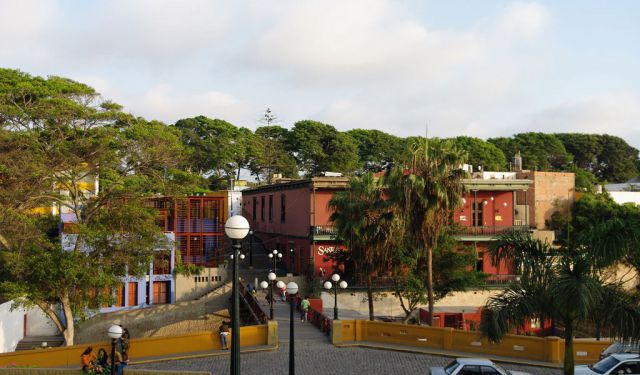 Image by Emmanuel DYAN on Flickr under Creative Commons License.

South of the center of Lima is the beautiful seaside neighborhood of Barranco. This is one of the oldest and smallest parts of the city and its many opulent colonial and Republican style homes were built as summer retreats for Lima's wealthy elite. Since the end of the 19th century, Barranco has also been known as a bohemian enclave, attracting numerous artists. Some of the country's leading painters, sculptors, musicians and photographers live and work here.

Enjoy leisurely strolls around the area to marvel at the mansions, old churches and picturesque parks and plazas. Stop by the main plaza, where you will find many restaurants, bars and bistros. Take the alleyway down to the sea and walk across the Bridge of Sighs. According to local lore, a young woman from a wealthy family fell in love with a street cleaner, but their relationship was forbidden and her sighs could be heard from the bridge. Many young lovers come here for their first kiss.

The promenade near the beach is a terrific place for an evening meal, with views of the Pacific Ocean and wondering musicians performing while you dine. If you are in the mood to party, take your dancing feet over to one of the nightclubs or dancing clubs, known as peñas.
How it works: A discovery walk features a route using which you can explore a popular city neighborhood on your own. This walk, along with other self-guided walks in over 1,000 cities, can be found on the app "GPSmyCity: Walks in 1K+ Cities" which can be downloaded from iTunes App Store or Google Play to your mobile phone or tablet. The app's built-in GPS navigation functions allow following this walk route with ease. The app works both online and offline, so no data plan is needed when traveling abroad.

Lima, the capital of Peru, is a huge, thriving metropolis and one of South America’s largest cities; it was established by Spanish conquistador Francisco Pizarro in 1535. The carefully preserved city center has retained much of its original colonial character set in the stones of Plaza de Armas – the city's main square, as well as numerous Baroque and Renaissance cathedrals, colonial...  view more

The district of Miraflores is one of Lima's key tourist destinations, renowned for its affluent setting, upscale shopping, phenomenal oceanic views, seashore restaurants, parks, and interesting archaeological sites. The attractions here are numerous and include, among others, the following:

Today's Lima is a large, commerce-booming and tourist-friendly capital, equally rich in terms of ancient culture as well as intricate cuisine and wealth of shopping opportunities suitable for various budgets.

Although in recent years many international brands have found their way to Lima’s stores, the majority of tourists keep looking to street fairs and artisan “Indian” markets...  view more