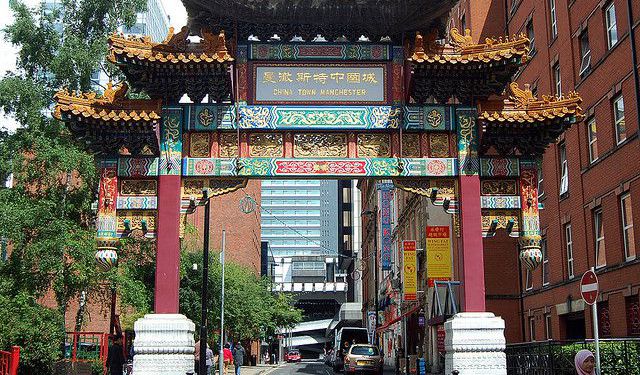 Manchester's Chinatown is a heady and intoxicating place full of color and spectacle, fascinating shops and restaurants and enticing bakeries and groceries. In addition to the many Chinese restaurants, there is also a smattering of other cuisines on offer, such as Italian and Thai. This is the second largest Chinatown in Britain and the third largest in Europe, and it knows how to throw a good party.

Each year, the massive Chinese New Year celebrations attract thousands of visitors. As you stroll through the area, admire the many decorative features, such as lanterns and Chinese characters. The focal point is the Chinese Arch, the largest arch of its kind in Europe.

After Chinatown, there's more fun, excitement and color to be experienced at the village on Canal Street, known as "Manchester's world famous Gay Village". Since the beginning of the 1990s, the area has evolved to be one of Europe's liveliest gay districts, and it encompasses many bars, shops and restaurants.

It is a popular destination for people of all sexual persuasions at all times of day and night. And if you want to stay out late and party, some of the best nightlife in the city can be enjoyed here.
Image Courtesy of Flickr and Clare Bell.
How it works: A discovery walk features a route using which you can explore a popular city neighborhood on your own. This walk, along with other self-guided walks in over 1,000 cities, can be found on the app "GPSmyCity: Walks in 1K+ Cities" which can be downloaded from iTunes App Store or Google Play to your mobile phone or tablet. The app's built-in GPS navigation functions allow following this walk route with ease. The app works both online and offline, so no data plan is needed when traveling abroad.