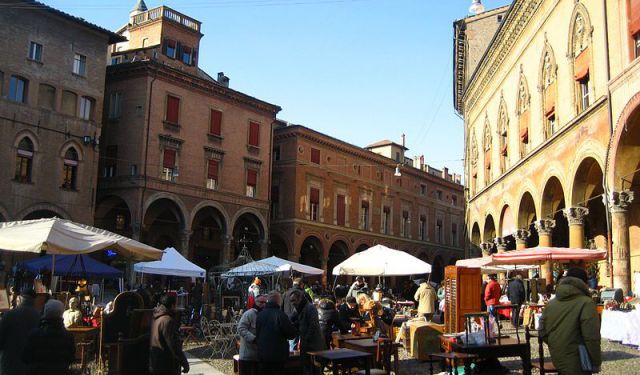 Image by Jeremy Keith on Wikimedia under Creative Commons License.

Whether you are a discerning collector or just want a unique find for the home, the city center is the place to go to for antiques when in Bologna. It is known for the quality and variety of its antique offerings, and inside the showrooms and stores you will find a wide range of treasures. Search for books, glassware, furniture, vintage clothing, china, dolls, old lace, collectables and so much more.

There are several streets to explore, with one of the best being Via San Vitale. Other good streets for antiques and furniture include Via S. Stefano and Strada Maggiore, one of the oldest roads in the city. It is home to many antique stores and the furniture store La Tantazioni. Corte Isolani is another terrific place for an antiques hunting trip. This covered passageway is part of one of the oldest residences in Bologna and has been turned into a shopping and dining center.

Rummage for even more antiques at the antique market Mercato Antiquario Città di Bologna. It takes place on the second Saturday and second Sunday of the month (except July and August) and is spread around the square in front of St. Stephen's Basilica and surrounding streets.
How it works: A discovery walk features a route using which you can explore a popular city neighborhood on your own. This walk, along with other self-guided walks in over 1,000 cities, can be found on the app "GPSmyCity: Walks in 1K+ Cities" which can be downloaded from iTunes App Store or Google Play to your mobile phone or tablet. The app's built-in GPS navigation functions allow following this walk route with ease. The app works both online and offline, so no data plan is needed when traveling abroad.