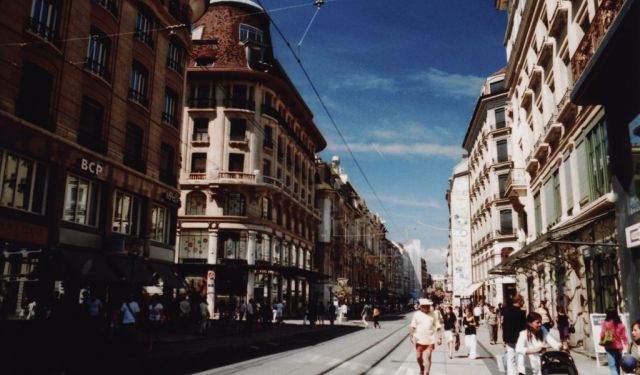 Shopping in one of Europe's most beautiful cities is nothing but a pure delight. The principal shopping area is the Rues Basses (The City Center), which encompasses several streets, including Rue du Rhône and Rue de la Confédération. This is the place to come for the very best shopping that Geneva has to offer.

On the Place du Mulard, browse some of the city's most expensive and glamorous shops for the hottest fashions, beautiful designer clothes and high quality jewelry. Most of the European luxury designers have a presence on Rue du Rhône. At the medium to lower end of the price scale are the many European clothing chains that can be found on the so-called "Tram Street". This main artery goes by several names, which change every few blocks or so, but keep an eye out for the names Rue de la Conféderation, Rue du Marché, Rue de la Croix d'Or and Rue de Rive.

During your shopping expedition, treat yourself to one of the products that put Switzerland on the map, and that is its chocolate. In the city center, there are a handful of chocolatiers who produce some of the finest chocolate that will ever pass your lips and melt in your mouth. The local chocolate specialty is the pavés de Genève (Geneva cobblestones). These are chocolate cubes inspired by local cobblestone streets.
Image Courtesy of Flickr and Alessio Maffeis.
How it works: A discovery walk features a route using which you can explore a popular city neighborhood on your own. This walk, along with other self-guided walks in over 1,000 cities, can be found on the app "GPSmyCity: Walks in 1K+ Cities" which can be downloaded from iTunes App Store or Google Play to your mobile phone or tablet. The app's built-in GPS navigation functions allow following this walk route with ease. The app works both online and offline, so no data plan is needed when traveling abroad.