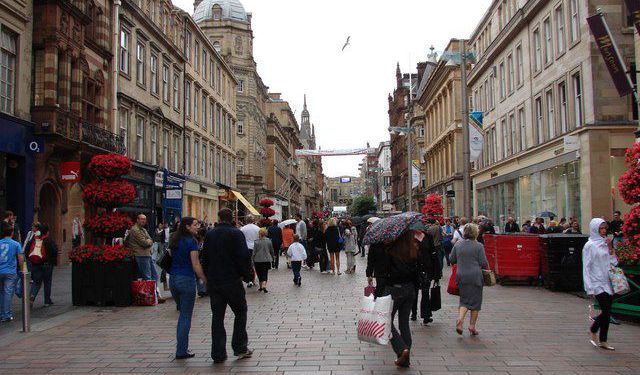 Image by David Hamilton on Wikimedia under Creative Commons License.

Sometimes, there's nothing better than to embark on a shopping spree, and some of the streets around Glasgow city center are like an Aladdin’s cave full of goodies. The main shopping arteries in the city are collectively known as the Golden Z and it's the second largest downtown shopping district in the British Isles after London.

There is something for all budgets in the city center's shops. Browse the stores in Argyle Street, the longest street in the city and the main shopping thoroughfare. It is lined by some of the biggest names in retail, including River Island and Top Shop as well as a huge Marks & Spencer store. For upmarket designs, take your shopping bags to Buchanan Street, while Sauchiehall Street hosts an array of popular brands such as TK Maxx and Watt Brothers, and value retailers like Primark and BHS.

Other shopping highlights are the city center’s two main shopping malls. There is the St. Enoch Centre, a covered shopping mall with a vast glass roof that makes it the largest glass-covered shopping center in Europe. At the northern end of the city center is the Buchanan Galleries, which houses more than 80 top retail names under one roof.
How it works: A discovery walk features a route using which you can explore a popular city neighborhood on your own. This walk, along with other self-guided walks in over 1,000 cities, can be found on the app "GPSmyCity: Walks in 1K+ Cities" which can be downloaded from iTunes App Store or Google Play to your mobile phone or tablet. The app's built-in GPS navigation functions allow following this walk route with ease. The app works both online and offline, so no data plan is needed when traveling abroad.