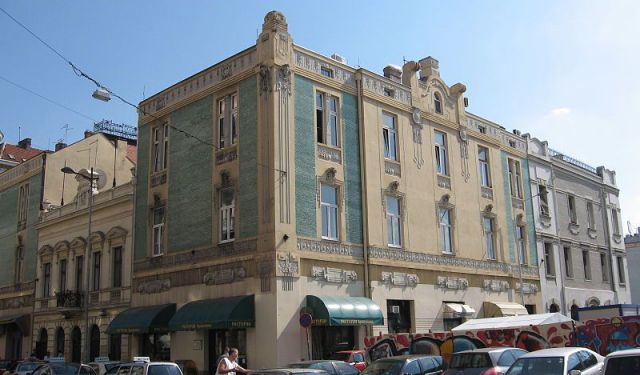 Image by Lumen roma on Wikimedia under Creative Commons License.

A walk through Dorćol in downtown Belgrade is like taking a tour through the centuries as you pass by and visit buildings from previous eras. This is one of the oldest parts of the city and is beloved by Belgradians who relish talking about its architectural charms. Some call it "the Manhattan of Belgrade" and within its boundaries are monuments from the Turkish and Austrian era, a fortress, the oldest house in the city as well as a number of modern buildings.

Stop by Belgrade Fortress, also known as Kalemegdan Fortress. There has been a fort on this site since the first half of the sixth century. See Belgrade's only mosque, Bajrakli Mosque, which was built between the years 1660 and 1688. Since that time it has been demolished and rebuilt several times, and for a brief period in the 18th century was a Roman Catholic church.

Marvel at the medieval Serbian Moravian style architecture of the Church of Alexander Nevsky. The original church was demolished in 1891 and construction of the place of worship you see today was completed in 1930. The foundation stone was laid down 18 years previously by the Serbian heir apparent Aleksandar Karađorđević. Go to the oldest house in the city, located at Cara Dušana street No. 10. The baroque-style building was constructed in the early 18th century.
How it works: A discovery walk features a route using which you can explore a popular city neighborhood on your own. This walk, along with other self-guided walks in over 1,000 cities, can be found on the app "GPSmyCity: Walks in 1K+ Cities" which can be downloaded from iTunes App Store or Google Play to your mobile phone or tablet. The app's built-in GPS navigation functions allow following this walk route with ease. The app works both online and offline, so no data plan is needed when traveling abroad.