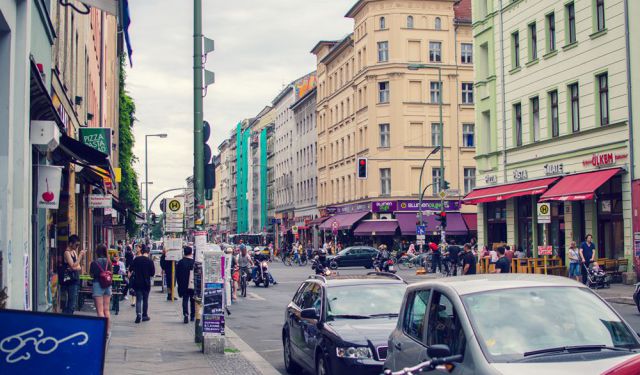 Image by sonic.knight on Flickr under Creative Commons License.

After the destruction wrought by World War II, the heavily bombed Kreuzberg was rebuilt, attracting numerous artists, hippies and activists to the area. Today, the locale feels more gentrified but it still has a bohemian heart with its graffiti-covered streets, art finds and laidback vibe.

Walk along the Oranienburger Strasse, one of the most popular streets in the center of Berlin. Many people come here for the nightlife in the extensive range of bars and restaurants. The artery is also popular with artists and cooks who come to buy the tools of their trade from famous stores. Clothe shoppers have plenty of options with fashion and street wear stores. Oranienburger Strasse also has a lot of history. In the 19th and early 20th century this was Berlin’s main Jewish area and you can see memorials to former residents who were driven out when Hitler came to power.

A pleasant place for a little stroll is among the cherry blossom trees and expansive lawn of the Mariannenplatz, a park-like square. This delightful open space was named after the Prussian Princess Amalie Anna Maria von Hesse-Homburg. At its northern end is St. Thomas Church, a striking looking 19th-century building that was once the largest church in the city. That position is now occupied by the Berliner Dom.
How it works: A discovery walk features a route using which you can explore a popular city neighborhood on your own. This walk, along with other self-guided walks in over 1,000 cities, can be found on the app "GPSmyCity: Walks in 1K+ Cities" which can be downloaded from iTunes App Store or Google Play to your mobile phone or tablet. The app's built-in GPS navigation functions allow following this walk route with ease. The app works both online and offline, so no data plan is needed when traveling abroad.